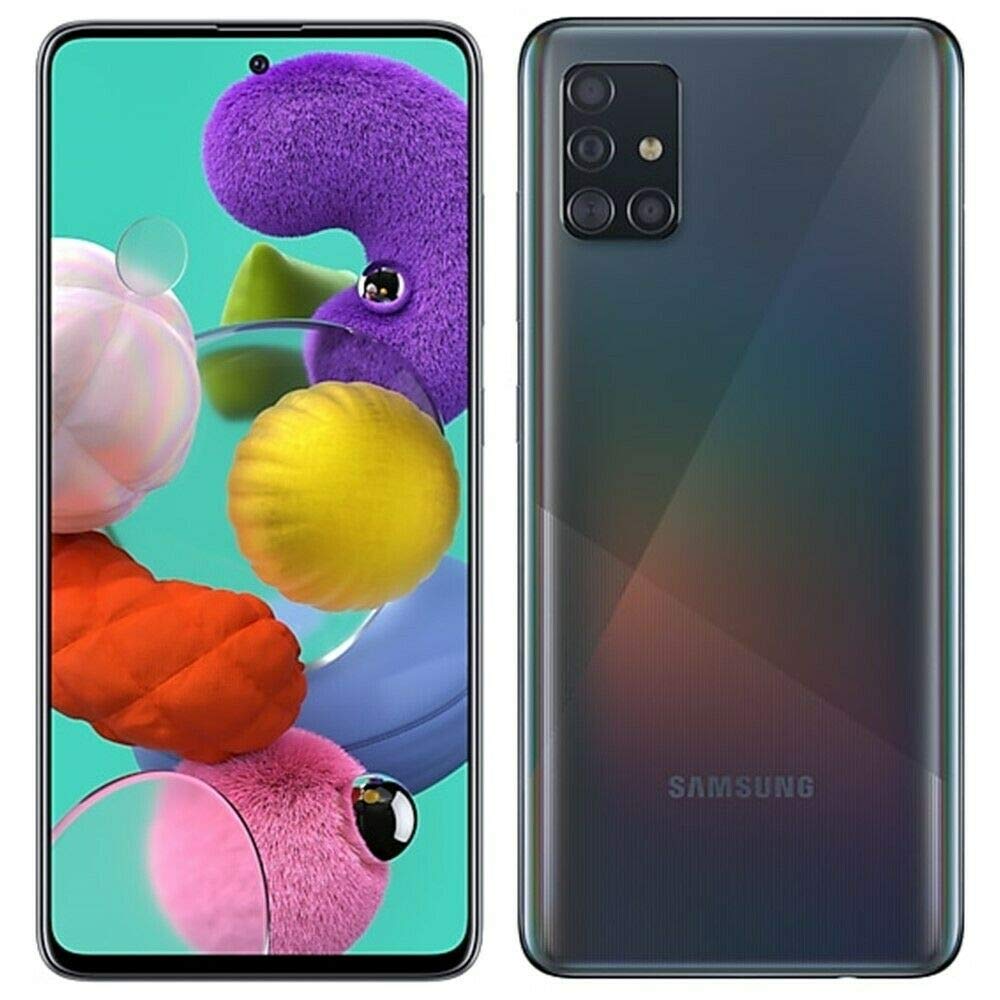 Posted by numero0899 | Published 7 months ago

Don't buy! It's 4gb of ram! Not 6gb! Customer support from BREED is utter garbage

Will change review
if something is done EDIT: THEY CHANGED IT TO NOT SHOW 6GB BUT CHARGE SAME PRICE FOR 4GB

Well, I purchased this Samsung A51 to replace my Samsung A50 because after the A50 updated to Android 9 Pie and January 2020 security update the battery life of A50 went way down by about 50 percent of what it was. So I bought the A51 (SM-A515F).
This model is greatly improved battery wise it is superb! (See below)...

PROS:
1)LTE works great and has all the necessary data bands to run LTE on my AT&T Service. I travel, so at different locations, AT&T Cell Towers have different bands, at home, I receive Band 2 (LTE/4G+). Around town I am on, bands 2,4,5 and sometimes Band 17 depending on the tower location. Even on the road, my Data works great and it is very fast!

2) WIFI...This is a super strong WIFI. I get 5 bars all over my home and outside in back yard, 4 bars. The WiFi is super fast and stays connected!

3) Storage Space and Battery Life...After the OS, Factory apps and after installing MANY LARGE APPS, I still have 109 GB left out of the 128GB, so I am very happy!

I purchased the 128GB with 4GB ram model in all black. My wife's S8+ that was close to becoming non-functional and I needed a new phone asap. I had previously purchased an A20s for my son and so I first ordered the A30s until I did some research regarding my mobile provider T-Mobile in the US.

Now with that primary consideration out of the way, on to the rest of the review. I'll start with the best parts first.

1. Call quality, reception and connectivity
The call quality is excellent on this phone, right up there with my s10+. I think the microphone quality has been improved because my wife loves using the speakerphone and on her hold s8+, her voice occasionally cut out here and there as the mic tried to pick up her voice. Also, the sound quality of the voice has improved as well which further helps to understand the conversation. Reception has been about the same compared to my s10+, which is to say pretty good. We measured on signel strength and asu. The mobile data speeds are excellent even in areas that are typically weaker in signal strength.

2. Screen
Samsung AMOLEDs are the best in the business when it comes to screen quality. We are a little relieved the screen is not curved because this allows us to get a robust case to protect everything. The colors, quality and resolution are all indistuingishable compared to my s10+. The front camera is a tiny pinhole so the entire body is pretty much all screen. There is an in-screen fingerprint reader which is optical, rather than infrasonic on my s10+ but it is still reasonably fast to unlock the phone. Yes it is slightly slower than my s10+ but we're talking milliseconds of difference.

3. General usability
My wife is not a gamer so I can't say anything about the gaming experience but she does use a ton of media and productivity apps. For all of her use on them so far, she says they feel snappy. They all open fast and transition well and she multitasks as much as before without a shred of difference. When we first setup the phone, we were concerned because there was some UI lag but realized a lot of processing was being used during the Samsung Switch, which transfered her entire old phone to the new phone. Once the switch was done, we rebooted and the phone was responsive and fast.

4. Camera
The camera hardware has some beefy specs. But for a mostly point-and-shooter, it's hard to really go wrong many camera setups. Picture quality looks great in the light and not as good in the dark compared to my s10+. The slower camera speed is noticeable, transitioning between the main camera/wide/macro takes about a half second, where on my s10+ is pretty much instant. The shutter is just as fast, luckily. If camera speeds are important to you, you would probably not be happy with this phone.

5. Battery
I have to admit, we were looking forward to getting more usable time out of the battery. The battery is 4000mah unit and the s8+ was only 3500mah. However, through the typical daily use, we found that the end-of-day percentage left were about the same. We average about 4 hours of on-screen time scattered throughout the day with app use and web-browsing and the battery was around 40% left, which is the same as the s8+. If long battery life is important to you, you would not be happy with this phone but keep in mind, it can easily last an entire busy day on a single charge.

Overall, we like the phone for the price of under $300.

LTE working on T-Mobile in US with Mint mobile, after configuring APN!

Great budget phone with a fantastic screen and pretty decent camera, and enough ram for the typical person.

Got the phone, 4 gig ram, might not be a such thing as 6 gig . Every online seller seems to be the same few people amazon or not, it will work , camera is great but most carriers wont see the iemi and you most likely will get something like h+ . As much as i dont want to, i will have to return the phone . Samsung and att couldnt help me . I will try the us unlock a50

Happy to receive the phone a day early, the finger print censor isn't as good as it could be but the face recognition is amazing especially on a lower end phone. The last Samsung I had was a galaxy note 8, I have tried other android phones from Motorola to lg and nothing can compare to a samsung. I haven't had the phone long will update in a month. But so far happy with the phone. I use cricket as my carrier and was able to put my sim card in and it read it right away. I'm getting decent service on the phone better than what I did with my previous phone. I like how light the phone feels, it also fits well in my hands for texting and calling. I don't need all the high end bells and whistles so the phone does everything I need for It is an amazing budget phone.

I researched this exact model and every website says that this model comes with NFC, but it doesn't. I noticed a customer ask the question if this model has NFC and it seems it was the seller who said it does have NFC. This phone is an international phone and it has some things in the settings that are in Spanish when I chose "English" in the setup. This phone also came with Android Auto preinstalled, but there is no way to open the app. Uninstalling and reinstalling doesn't help either. Not pleased that this phone doesn't have NFC and the fact it has software bugs and it cost me $300 before tax. There are other phones out there for a lower price and even better specs. Not sure if will buy another Samsung phone after this experience.

I have been looking for a decent dual sim phone with true dedicated storage expansion for some time. Many options have been dated or are weak in at least one area making the choice a compromise. I also run a Galaxy Note 10+ which is a great phone but it was promised at release to be dual sim. That never materialized. Dual sim and separate microsd capability was important to me for travel and having work and media files at the ready - all at the same time. Too many choices had "hybrid sim" where you have to choose between the second sim and sd card - not my definition of the concept. Many came with weak camera specs and processor but I wanted a phone that had it all. This is the closest I have come. I have tried the A50, the A70, the Honor 8 pro and even waited around for the Umidigi F2 (which the jury is still out on). There were others also. This in my view is superior. The A51 has decent power and capability even with "only" 4GB. LTE bands have been comprehensive for my needs and I get all the other requirements I had fulfilled. I have not done a lot with the camera as yet but it is a definite improvement over the current Samsung A series and the other phones I tried (excepting the Note!). Phone build quality is good, reception has been good, no noticeable lag like I got with some of the other phones I tried. Fingerprint sensor better than the Note and battery life is equivalent to the Note. All in all, very good bang for the buck. Relatively speaking, a great price for a phone that ticks all the boxes. An added benefit is this phone is smaller than the Note 10+ and is surprisingly tactile to the point this phone has become my go-to. 4 stars out of 5 as I wonder if a 6Gb (or even 8Gb) version would have been superior. No regrets on this purchase. Recommend highly if your needs are similar. Buy a protective case, too.

The A51 is a solid mid range device with some issues that would bother android enthusiasts. First off the positive: Android 10 out of the box, 90% screen to body display and the front camera cutout is smaller than on a Note 10 or an S10. The display is vibrant and Super Amoled and the battery is solid. There's a headphone jack and the speaker isn't amazing but decent. The phone doesn't stutter or slow down too often, you can play Pubg on high settings and frame rates don't drop.

The bad stuff lies mostly with Samsung's software. NFC is disabled for some reason. There is no haptic feedback unless you download a tool and edit the system settings yourself, gesture navigations only work on their launcher as well. Finally the one thing that actually bugs me is the performance of the fingerprint sensor, it's slow, you have to press harder than a traditional sensor and you can only register three fingers. Give me a traditional sensor until you figure out these issues.