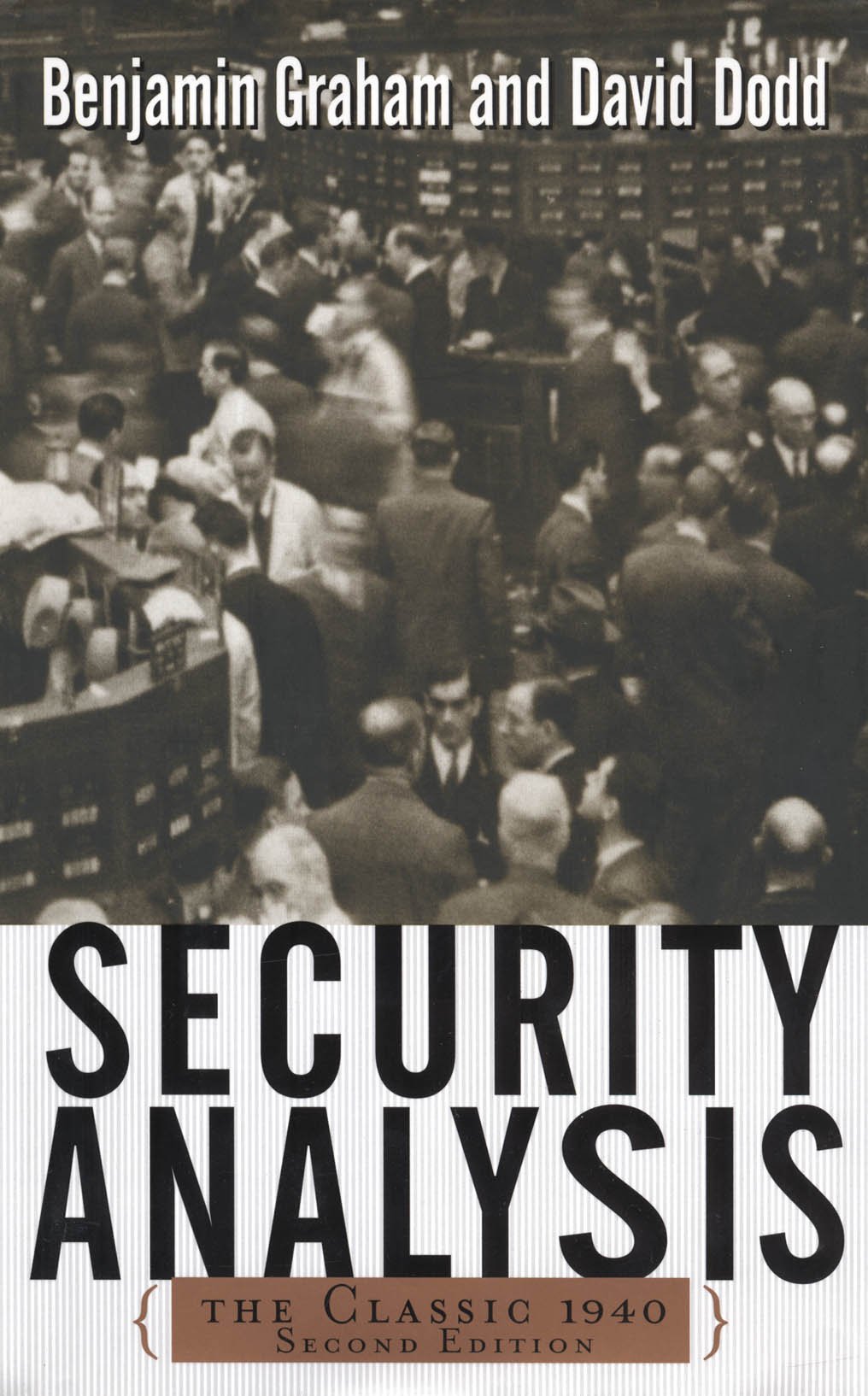 By: Benjamin Graham and David Dodd

"Graham's method of investing is as relevant today as it was when he first espoused it during the Roaring Twenties."--Investor's Business Daily

Benjamin Graham's revolutionary theories have influenced and inspired investors for nearly 70 years. First published in 1934, his Security Analysis is still considered to be the value investing bible for investors of every ilk. Yet, it is the second edition of that book, published in 1940 and long since out of print, that many experts--including Graham protégé Warren Buffet--consider to be the definitive edition. This facsimile reproduction of that seminal work makes available to investors, once again, the original thinking of "this century's (and perhaps history's) most important thinker on applied portfolio investment."

View on Amazon
I just finished reading this book cover to cover, and will probably read it again in a few weeks time. I found it to be quite simply the best and most complete resource on value investing I have ever seen, read or heard of in my life. Graham and Dodd not only teach us how to invest and why, but convey with beautiful eloquence their reasoning and frame of mind. They teach us that investing is as much about constitution and temperament as it is about logic and numbers, and are able to impart that wisdom and experience to us in those few hundred pages (ok, many hundred pages).

For those of you reading this who are new to investing, Benjamin Graham and David Dodd quite literally wrote the book on value investing, and this is it. I would point out though that it was written for the purpose of being a source of information and tools rather than a way of introducing and inspiring its readers to the philosophy of value investing. So if you are new to investing or to the concepts of value investing, I would really recommend reading Graham's "The Intelligent Investor" first; it's a comparatively easy to read introduction to the concepts covered in greater detail in this book.

While I have not read the original 1930's edition, I have heard that this version is more complete in that it irons out some of the kinks in the investment strategy that Graham developed following his near bankruptcy during the great depression.

A word on the relevance of this book in today's market: Much of the book centers about examples from preferred stocks of utilities and railroads, investment vehicles which are far less prevalent today than they were in the early 20th century. However, these are just examples, and the pitfalls and opportunities which arise in the stock market are as prevalent today as they were in the days this book was written. I am of the opinion that those who criticize this work on the basis that it is outdated, really did not understand what Graham was trying to do; to convey a new way of thinking about stocks, and to understand them based on the company that they represent. It doesn't matter whether you are purchasing a pre-depression era railroad preferred or the hybrid floating rate bond of a modern technology company, the examples exist to illustrate how to look past all that and to understand what the purchase of that security really means. If, after reading this book, you find yourself unable to transfer the examples to the modern world, then quite frankly you've read it wrong.

If, however, you are concerned about the relevance and are after more specific guidance on modern applications (as well as trimming of the "less" relevant sections), take a look at the 6th edition of this book, which contains detailed chapter summaries and introductions by modern money people.

Finally, the reason for the 4 stars: The digitization of this book is not fantastic, and given the price this is not really acceptable. I found several errors which I have reported (and will hopefully have been fixed by now), but my real gripe is with the tables and figures, which are simply scanned. This is usually fine, but many of the footnotes are so small as to be illegible, and the overall feel is somewhat like a sketchbook; with cutouts glued to the pages where the tables were in the real book. I had hoped that Amazon would instead have digitally transcribed the tables and inserted them, or at least given them a transparent background, rather than the sepia tone that can't be changed on the tables. If this is ever corrected I'll change my review to 5 stars and remove this paragraph.

I can't possibly express my gratitude for what those two did when they decided to put Graham's experience onto paper in the form of this book, and I think I will forever be grateful for their efforts. This book has taught me invaluable lessons not only in investing but also in prudence and the value of sobriety in the face of euphoria and gloom, lessons which apply to many other facets of life.

Outstanding book by the greatest teacher of investment analysis in history. What's not to like? Warren Buffett says this edition, that is the 1940 edition, is best, so this is the one to get.

Only quibble is that it's a bit long and sometimes ponderous. If you haven't read "The Intelligent Investor" by Benjamin Graham, get that one first; but after you read that, you'll probably want to read this one.

With nearly a million copies sold, "Security Analysis" has been continuously in print for more than sixty years. No investment book in history had either the immediate impact, or the long-term relevance and value, of its first edition in 1934.

The prescient thinking and insight displayed by Graham and Dodd in the first editions of "Security Analysis" reached new heights in the second edition. In words that could just as easily have been written today as fifty years ago, they detail techniques and strategies for attaining success as individual investors, as well as the responsibilities of corporate decision makers to build shareholder value and transparency for those investors.

The focus of the book, however, remains its timeless guidance and advice--that careful analysis of balance sheets is the primary road to investment success, with all other considerations little more than distractions.

"Security Analysis: The Classic 1940 Edition" marks the return of this long-out-of-print work to the investment canon. It will reacquaint you with the foundations of value investing--more relevant than ever in tumultuous twenty-first century markets--and allow you to own the second installment in what has come to be regarded as the most accessible and usable title in the history of investment publishing.

I chose this version of Security Analysis because Buffet said it was his favorite. It did not disappoint.

However, it's very helpful to have a background in finance and accounting to enjoy this book. I tried to read it as a college sophomore, but couldn't get through it. After 1.5 years of investment banking, and 1 year of investment analysis (constant reading of company filings), I gave this book another try. I completed it and learned a lot. It's very comprehensive in its discussion of corporate finance, investment securities, and investment philosophy.

I created my own tumblr detailing the insightful quotes:[...]

It's a book that I will re-read again in the near future.

It give one a very good understanding how thing work, but at the end it is all understanding risk of gambling with back room traders running rackets to use to average income/loss within these manipulators.

So many years have gone by, and still the best book ever written about investing. If you are a solid investor who does not care about speculation, this is the book to read. I recommend the second edition since it has the appendix in the last 100 pages of the book. The 6th edition does not have the appendix at the end of the book, it comes with a CD which I found bothersome since you need a computer to look the notes in the digital appendix. In addition to this book, I recommend to read Common Stock and Uncommon Profits by Philip A. Fisher. IF you want to learn about market cycles get a copy of BULL a History of the Boom and Bust , 1982 - 2004 by Maggie Mahar..

I bought the 1940-edition because it seemed evident to me that authors profit from the occasion of a new edition to amend some shortcomings from the first one. All by all this is an impressive work. Such material cannot be read the way you read a novel. When I read somewhere that an intelligent man like Warren Buffet studied this work time and time again then I'm not surprised. Is it outdated or is it still valid for a reader in the 21st century? I believe it is still very valuable, the analysis of Graham and Dodd being very thorough. Maybe it could be said that for the contemporary reader there is in this analysis a shortcoming, namely that the very important aspect of cashflow is nowhere to be found. But then you have to realise that the study of cashflow as an integral part of financial analysis is historically the junior member of this discipline. Conclusion: this edition deserves wholehartedly it's five stars.

A masterpiece. But readers are expected to have some basic knowledge of finance

When you know how corporation must behave you will know how to choose the best ones.
Long-term relevance and value of corporations.
Better than later 6th edition.

I've really enjoyed it. Everyone had told me it is the bible of security analysis and it was.
Very useful.