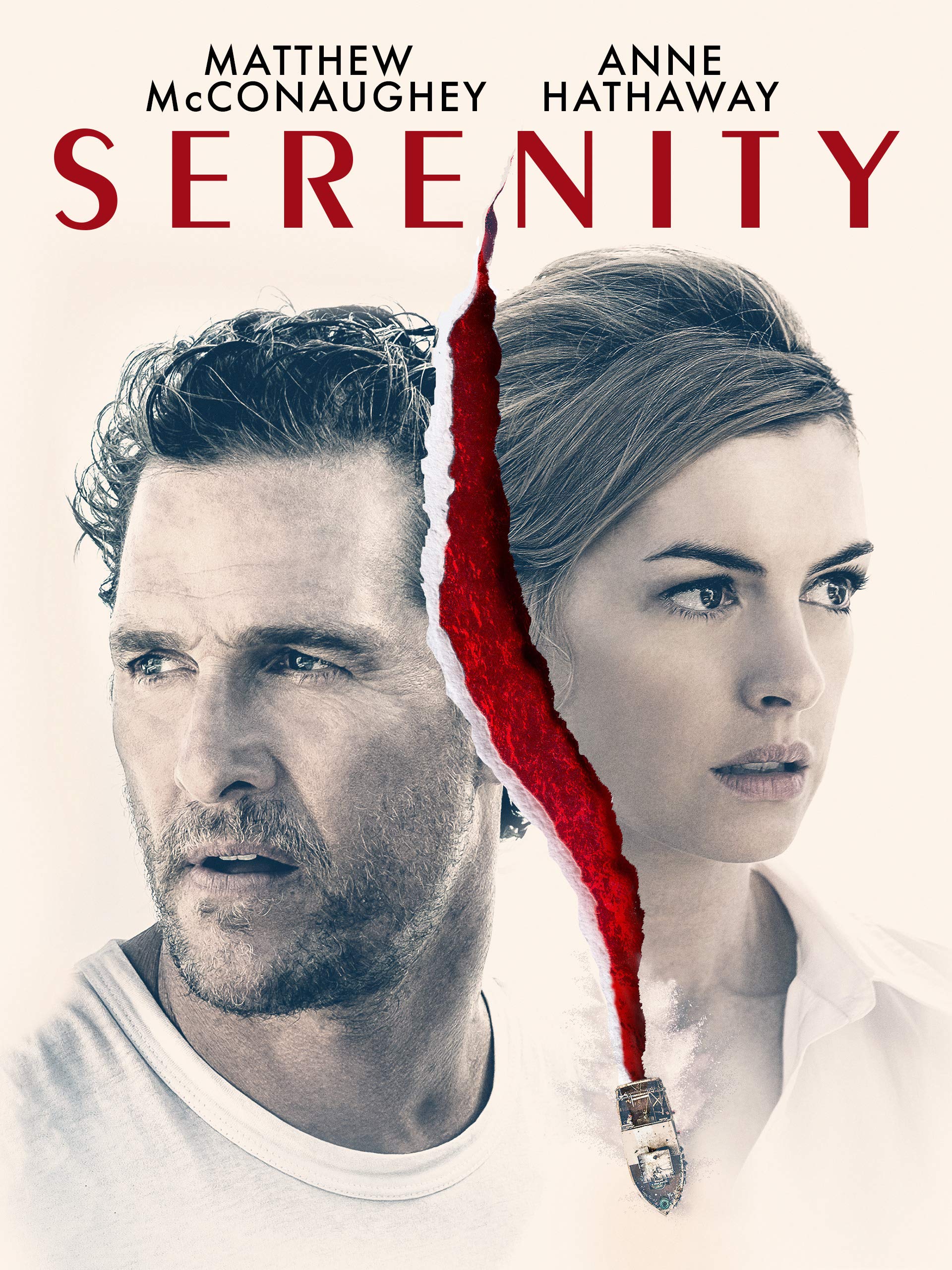 Okay, now that you have been warned, I will explain to you the plot. It's so sad that so few people seem to be able to follow a complicated plot these days-- the old crime thrillers thrived on the audience being able to follow something that is not spelled out for them, but that skill is lost these days. Even after this movie completely spelled out what is going on.

This is what happens in the plot of the movie, in time order:

A young man, John, is happily married with a kid son. Then he goes off to war in Iraq and is killed. His wife remarries a local construction kingpin, who becomes abusive to both the woman and her son. Her son is brilliant and hides away in his room every day programming his computer. He eventually creates a computer game about fishing (in remembrance of a great memory of fishing with his father) and populates the game with artificial intelligences (AI). The program is so good that these AIs become self-aware and think they are real people living in a real world (like the Matrix, or the Truman Show, or The Sixth Sense, the main character doesn't know what the real deal is until the end).

Eventually this kid becomes so disturbed at the violence of his father that he changes the game and inserts AI versions of his mom and his stepdad into the program, and then has the mom try to bribe the real dad (the AI dad in the program) to kill the AI stepdad. The greatly disturbed the operating system of the game, which is also self aware (represented in the program by a dorky guy with a briefcase). It tries to contact the AI version of the dad and convince him not to kill the stepdad, and instead to return to the original mission of catching a fish, and also tries to put road blocks in his way. The AI dad (the main character) forces out of the operating system AI the truth that they are all AI consciousnesses, not in the real world. Although he struggles to accept this, he decides to go ahead and perform the new mission of the son, to kill the stepdad, since the son is his creator. He eventually convinces the operating system to embrace this cause too, since after all they are all just doing the will of their creator.

So they succeed at killing the AI stepdad, and this inspires the kid to go kill his stepdad in the real world. In the end, the kid is in jail but has access to his computer, and he designs an AI version of himself and inserts it into the game, and the movie closes with him embracing his (dead, but now AI) dad. Perhaps they will live happily, or only until someone switches off the computer.

So many fascinating philosophical issues involved. If you realize you are an AI, and the creator is not a good and just creator but a messed up kid, are you duty bound to do the will of your creator? Or is there a higher law that binds you to do the right thing, even above the kid-creator? One of the AIs in the game, the second mate of the ship, argues that they must be faithful to a higher moral call-- but argues this on the basis that there is a creator. But he doesn't know the creator of their world is a messed up kid, not omnipotent. Could it be that he knows somehow in his heart that there is an even higher creator than the kid, a true Creator of the world that contains the kid? After all, the kid lives in the real world and knows about religion. Another question: does the AI dad have free will? Is he responsible for the kid in the real world committing murder? Or did the kid program him to do his will, without a choice? The movie seems to indicate that the kid was waiting to see what his AI-dad would do before making his own decision.

Some reviewers have complained that the opening of the movie is cartoonish--the AI dad is clearly cartoonishly copying the plot of Moby Dick; the AI mom is a caricature of a film noir vamp. But that is because they are the cartoonish creations of a 12-year-old! That's the point-- the whole "world" is a Matrix-like world, the creation of a smart but emotionally crippled child. The really interesting thing to ponder is what if you realized one day you were in that Matrix world.

This type of "what is real?" movie and "would I know the world was a mirage?" has become a genre, including the Matrix, the Sixth Sense, and the Truman Show. One could also put the old movies Gaslight and Walter Mitty (not the recent version) in this category. Serenity, the Matrix, and the Truman Show all ask the question, what if the creator isn't good? In the Matrix and the Truman Show, the main character fights against the creator (who, after all, is not the total Creator but only a sub-creator of a limited world), while in this movie the main character acquiesces to the will of the (deranged) creator of his world. There is an odd meta-nesting: he recognizes that he isn't real, but realizes that there was a real dad who loved his kid before he died, and he takes pity on the kid, trying to parent him by becoming what that real dad could have been-- even though the kid is his creator.

So fascinating. Too bad that so many people couldn't follow it. It will be discussed in philosophy classes for years to come.

YES, I do know what the movies about and I'm sure the other people who hated it knew too! We don't need some condescending know-it-all to explain it to us! Get over yourself this was a bad movie. I didn't like it and I could have been using the time doing something important or fun for gods sake! And I just love it when a poster puts Spoiler Alert right in front of the "Spoiler" itself, as if there's some magic text to cover up the next couple of words! So many movies ruined that way. Anyway, didn't like it, and that's my right and MY opinion.

I am convinced of two things, one that Serenity is a very good, unique, competent film, and the other that general audiences are so saturated with their junkfood diet of meaningless, shallow Avengers and reboot films that they are no longer able to interpret the art of filmography.

The choices the director Steven Knight made to merge the two parts were integral to why this film succeeds. On its face a story of a kid playing games on his computer to escape reality is derivative and boring (ahem, Ready Player One), but changing the main character around and sitting that broader story around a Noir character drama that is telling the story of that child was a creative and genius move. Knight made this film as non-pretentious as possible, even given the ending reveal. Everything clicks into place and feels necessary because the focus is always on the characters. The Noir drama also helps to blur some fictional liberties the script needs to take to make the character drama work.

On top of that Benjamin Wallfisch's score is great, the cinematography is great, including very limited use of CGI in favor of real open waters. The acting is great. That Aviron destroyed this film and did nothing to standup for it is pathetic. The critical slamming and dog piling on this film is completely unwarranted and makes me embarrassed for those partaking. The claim that this is some great 'bad' film has to be one of the dumbest analytical take aways I have ever heard in film, next to the claim that Frozen is a good movie. If you care about a real film where the cast and crew actually tried something interesting, this movie is a must watch. If you want to eat nachos and watch computer generated space monsters blow things up while quipping nostalgic lines to your favorite pop/rock music, nothing can save you.

The previews made this movie look really cool, but that was it. I'm surprised how bad this movie was, considering all the good actors and actresses in it. This movie will entice you and then lose you a couple times, but in general, this movie blows after you start putting the pieces together. I'm not going to say anything about the movie in case you want to watch it, but I highly don't recommend it!

I enjoyed this movie, but if you didn't like the Matrix or Inception you will not like this one.
You have to figure things out as it goes along, but all the information is in the movie, you do have to pay attention
I thought the acting of Mathew and Ann was outstanding!
I would recommend this movie.

If you thought you had an idea of what this movie was about just from the trailer, you'd be wrong. There isn't much that goes wrong in the film with the performances of it's top billed cast members. They give some great in character insight to keep the movie going. There is a small blink and you'll miss it moment as the movie opens that pays off later in the movie.
I'm not sure how else to describe this movie though. It would be seen as thriller slash suspense flick, but it pays off in such a way you did not see it coming. Matthew McConaughey and Ann Hathaway do a great job with their characters and that helps you stay invested in the movie. I guess you're just going to have to watch it to see what we mean. Enjoy.

It was a very strange movie. In the information about this movie, it never said it was about a game. It is supposed to be about a woman who wanted her ex to kill her current husband. It said nothing about a son.

Interesting story with a great cast