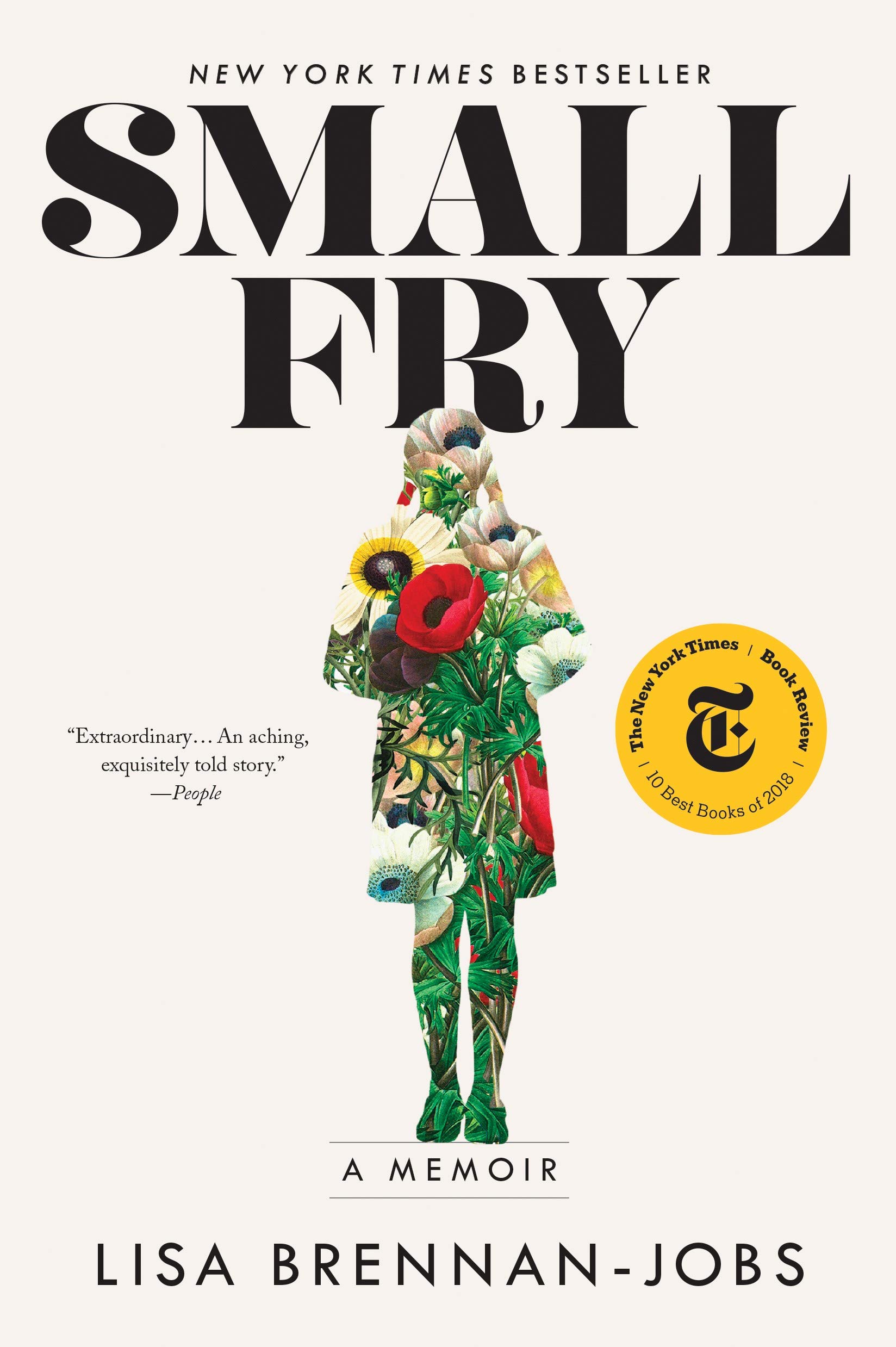 A frank, smart and captivating memoir by the daughter of Apple founder Steve Jobs.

Born on a farm and named in a field by her parents - artist Chrisann Brennan and Steve Jobs - Lisa Brennan-Jobs's childhood unfolded in a rapidly changing Silicon Valley. When she was young, Lisa's father was a mythical figure who was rarely present in her life. As she grew older, her father took an interest in her, ushering her into a new world of mansions, holidays and private schools. His attention was thrilling, but he could also be cold, critical and unpredictable. When her relationship with her mother grew strained in high school, Lisa decided to move in with her father, hoping he'd become the parent she'd always wanted him to be.

Small Fry is Lisa Brennan-Jobs's poignant story of a childhood spent between two imperfect but extraordinary homes. Scrappy, wise and funny, young Lisa is an unforgettable guide through her parents' fascinating and disparate worlds. Part portrait of a complex family, part love letter to California in the seventies and eighties, Small Fry is an enthralling book by an insightful new literary voice.

View on Amazon
This is a book that is entertaining as it is hard to read. Sad to say but I was raised by a sociopath and I feel that I had a better child hood than the author did. This book will bring a tear to your eye and well as a few laughs. One of the most heart rending stories is when Steve Jobs finally brings home a NeXT computer for Lisa to have. (She had been wanting one for about a year.) Only to find out that is does not work and he eventually removes it from her room. Let’s face it the guy had a genius for design but he was also a sadist. No doubt about the last one. The book mentions how Stevie baby took the whole family to Hawaii and while enjoying the climate of such a beautiful place he took time out to basically torture a parrot. He was teasing it with food trying to determine if it would learn the lesson not to lean for the food when he dangled it in front of the bird. (Can you imagine how many human beings he performed this exact exercise on in this life time.)

Sooo thanks for making the effort to write this book. My parents moved up several notches by the time that I finished reading this master work. (I never thought that would happen.) The most important point of this story to me is….a beautiful lady was able to weather the storm of bad parenting (both by the way) and basically willed herself into Harvard. Ms. Brennan-Jobs you are a survivor and also an inspiration.

It is amazing how much Lisa Brennan Jobs reminds me of the protagonist in "Educated," both overcame massive hurdles, parental indifference, cruelty and outright obstruction to get an education and have successful lives. It also interests me that Steve Job's wife and sister commented on the book that it "wasn't the Steve they remembered." Of course it wasn't, he treated them well. They don't, however, say she was wrong as to how she was treated. They remind me of when Child Protective Services interviews the two children sitting and eating at the dinner table as to what kind of parents they have. Their description of their parents will be way different from the third child's--the one outside chained to the dog house and eating scraps out of a dog bowl. Can you imagine the scathing parental conversations about Lisa her half-sister must have overheard if she could so casually describe Lisa to a group of her friends as "Daddy's mistake?" Hats off to Lisa Brennan Jobs, you didn't have the childhood you deserved, but you certainly have made something of yourself!

Living in Palo Alto in the 1980s, we often heard rumors that Steve had a daughter named Lisa for whom the computer was named. No one seemed to know whether this was a true story or an urban legend, and certainly none of us realized that Lisa and her mom lived among us -- going out for dinner to the Good Earth, shopping at Units, cruising down University Avenue. Meanwhile, especially after Steve and Laurene married and more kids came along, we often ran into them: getting dessert at Gelato Classico, buying gifts at Palo Alto Toy & Sport, even roller skating along Homer near Whole Foods. Whatever else we thought about Steve, he seemed like a devoted dad.

Lots of people are raised by substandard parents. You don't get to choose your mom and dad. For many of us, recovery can take decades or maybe even never. But Lisa, to her unending credit, is able to tell a story that radiates affection despite describing neglect that borders on abuse. She walks us through her childhood and teen years with unstinting candor, including a number of anecdotes that highlight her own missteps.

The most affecting scenes are the mother-daughter stories. Chris doesn't seem like a candidate for Mom of the Year, as she leaves Lisa by herself as a young child, brings home a series of boyfriends, moves from house to house, and often loses her temper. But because we see her through Lisa's eyes, our takeaway is the shared adoration between mother and child, and we understand that for all her foibles, Chris fought to give her daughter the best possible life. And in many ways her efforts were stymied rather than supported by the fact that Steve overshadowed their lives, even during the years that he remained detached from them.

Lisa is an artist, and her writing is the verbal equivalent of a painting, every detail sharply rendered. For that reason alone, this book is worth a reader's attention. Years ago I read an autobiography written by a poet whose narrative resonated like a poem; Small Fry hits that same note and sustains it. If not for her famous father, her book probably would never have been published, and that would have been a loss to all of us.

This is an enormously thought provoking and interesting book – the recollections of Steve Jobs’ eldest daughter. Steve Jobs had a notorious manipulative and explosive side to his character. After denying that Lisa Brennan-Jobs was his daughter for many years (and only paying a pittance in child maintenance) he did finally acknowledge that she was his. Nevertheless, he still implied to her that she needed to earn a place in his “family”, and used that to manipulate and control her. Lisa went from prepubescent to puberty to young adult trying to please him. In late teens she finally managed to break away with minimal contact until a few years later when he was ill and eventually dying. At this late stage, Steve apologised to her and expressed his regrets. It’s a sad story with Lisa’s longing for a warm and supportive father at the heart of it. Steve obviously had many (probably repressed) longings himself which seemed to manifest in manipulating people in his personal life and undermining them to keep them near him, with him in control. We see from this account of Steve’s private life that he also deprived himself of both physical and emotional nourishment. Nevertheless, Lisa survived; she was a spirited and obviously gifted child who was eventually able to successfully follow her own ambitions and desires. Now she sees her childhood experiences in a positive light. Her writing is accomplished. The first chapter hooked me in and I had to keep reading. The prose is wonderfully vivid and detailed. It's a good book!

I found this to be a fascinating book. Strange, quirky, entertaining and well written. I was rooting for Lisa as she went through her trials and tribulations with “Steve” (as she called him) her dad. She writes about him with obvious love and affection but regardless he comes across as a bit of a dick.

What a beautiful book and what an amazing young woman. If I were an Apple exec I would have her take over from Where her father left off. She would be the natural successor. If like me your fascinated by the charm of the Bay Area, California, Steve Jobs & the Valley you will love this. Most of all this book is beautifully written!

Love the book so far, I haven't read it all but I'm glued to it!

Raw, honest. Lovely perspectives and the feeling of seeing through the eyes of the person .

But i think he has been greatly misunderstood by all

Lisa Brennan is a remarkable writer whose trajectory of thought and narrative arc is never predictable. Often surprising, at times shocking, always engaging.

So very well written, such honesty, well worth a read

The book is in a good condition just as I expected.

This book is extremely well written in a very competent literary style. Those interest in Steve Jobs will want to read this but even those who aren't will enjoy it.
Once again, we see that Steve Jobs acted at times like a dirt-bag toward his family. He was a genius when it came to Apple and making money but he was quite the dummy in terms of being a good human being. But her love for her father ultimately shines through. Lucky for him.

I wanted to read this memoir because it appeared on so many 'Best Books of 2018' lists. It was indeed very well written. But I read a lot of memoirs, and I find that the ones I like best are written by or about interesting people. In this case both of Lisa's parents are really quite loathsome, in different ways, and Lisa comes across as pathetic, though understandably given the parents she had to deal with. In a season which also brought us Michelle Obama's brilliant memoir, Small Fry really just does not measure up.

Brennan-Jobs found the perfect distance from her younger self, an empathetic perspective that feels honest, and undecided. This portrait of patents remains divorced from Jobs, and focuses instead upon his wake, the impact of his actions on the author and her mother. The experiences she describes are outsized, but not extreme, and there is an uncomfortable intimacy that makes the pain something that I began, in some small ways, to really feel. I can understand why not everyone appreciates the publication of this book, but, as the person who experienced it, I don't think anyone would dare to argue that Brennan-Jobs wasn't entitled to tell her story.

Every single person should read this book. Amazing insight into life of person who is perceived as super priviledged. Lisa has beautifully walked us through her life leaving readers to understand the hidden side of a person who changed the world. Well depicted to have a permanent mark in your thoughts. Highly recommend to be in everyone''s reading list.