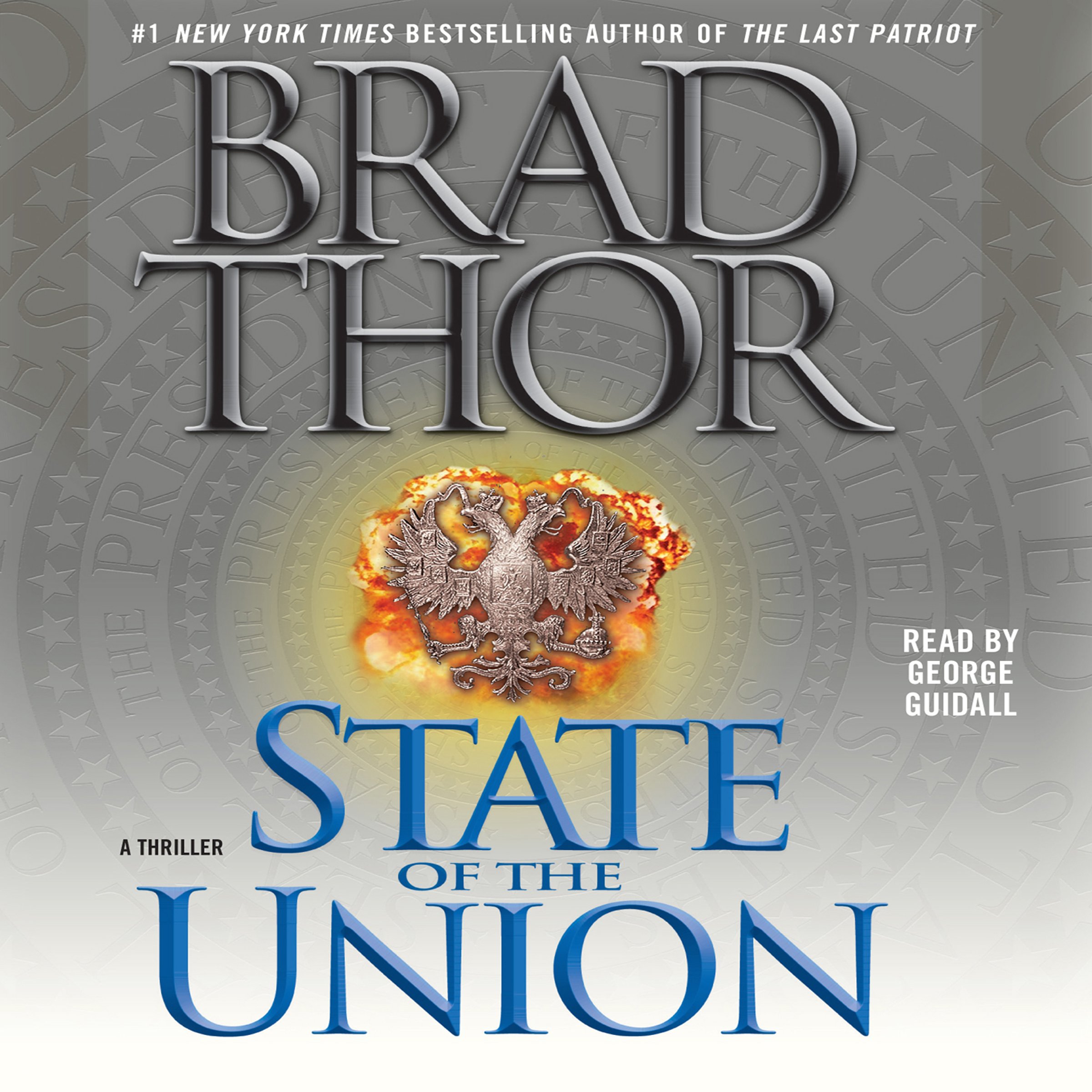 State of the Union

America’s worst nightmare has just become a brutal reality. The most unlikely terrorist enemy of all now holds a knife against the country’s throat. With both diplomatic and conventional military options swept from the table, the president calls upon Navy SEAL turned Secret Service agent Scot Harvath to disable a brilliantly orchestrated conspiracy intended to bring the United States to its knees.

Teamed with beautiful Russian Intelligence agent Alexandra Ivanova and a highly trained CIA paramilitary detachment, Harvath embarks on an adrenaline-fueled search that spans the world - and leads to a final, deadly showdown on American soil, with a lethal and sinister enemy from the past.

View on Amazon
In his third offering of the Scot Harvath saga, Brad Thor finally gets around to placing Harvath in his element: counter-terrorism. In the first offering, "The Lions of Lucerne," the former Navy Seal is featured in his role of Secret Service agent. In "Path of the Assassin," he ties up loose ends from book one and transitions away from Secret Service work and into the field he was so obviously made for. Harvath has to be one of the most highly trained individuals in history, and in "State of the Union," he will need every bit to make it out alive and save millions of innocent lives.

The story really starts in the early 1980's when the Cold War was at its peak. Both the Soviets and Americans had placed sleeper agents with suitcase nukes in position to detonate them in major cities. However, mutually assured destruction (MAD) was keeping both countries at bay. Fast forward 20 years to the present (this book was published in 2004) and we meet General Sergei Stavropol. The General has waited patiently for his plan to come together, and with the completion of the Soviet missile defense system, the concept of mutually assured destruction no longer applies. The first thing Stavropol does is try to eliminate the US sleeper agents with their suitcase nukes. Almost all are killed and Gary Lawlor, formerly of the FBI and currently Scot's boss at the Office of International Investigative Assistance (OIIA), the counter-terrorism branch of the government, has gone missing.

Stavropol, operating from a position of dominance, holds the US president hostage. His ultimatum: either the US retreats from the world stage both financially and militarily and the President announces this during his state of the union address, or his sleeper agents will set off the nearly two dozen suitcase nukes spread around the country in strategic cities. Even one of the nukes could kill millions, and leaving the world stage would be devastating for the US economy. Things look bleak for President Jack Rutledge and Stavropol seems to be holding all of the cards, but Rutledge has an ace in the hole - Scot Harvath. With only one week to work miracles, Harvath sets out to do the improbable. With help from some of the CIA operatives from the previous book, as well as beautiful but deadly Soviet agent Alexandra Ivanova, who's loyalty is in question, Harvath must disable the missile defense system and find the suitcase nukes before it's too late.If one reads enough of these books, the outcome is not in question. The interesting thing is to see how Harvath goes about accomplishing his task. With equal part skill and luck, Harvath doesn't have a moment to spare when we finally reach the climax.

This book is full of action and the scenario is definitely plausible. Just like the James Bond books, Scot Harvath has a tendency to get into tight spots, and also an uncanny ability to get out of them. I enjoyed this book more than the previous two, as counter-terrorism is Harvath's niche. I liked his involvement with Meg Cassidy from the last book, but she barely makes an appearance in this one. I guess Scot's career doesn't leave much room for a personal life. Nevertheless, I rate this 5-stars as the action kept the pages turning for me. I am looking forward to book 4 in the series.

Holy Cow, I pulled out on page 300 of 550. I cannot remember the last time I have done that. This is my 5th Thor book and my last. Harvath has been exhausted for me. If I hear a mention about his "Norseman" name, or the "girl he loves" back in Boston that we never get to meet, I am going to lose my mind. In SOTU, Thor used CHAPTERS to explain how agencies communicate, the layouts of rooms, the love interests of bad guys, ****AND SPOILER ALERT***** There is a scene that will have your heart absolutely pounding in the first quarter of the book. Very well written.... And then, NOTHING. Not only is there no follow up on what happened to this character and how he made it through the misery with out spilling the beans, but Thor does not follow up until half way through. AND BELIEVE YOU ME by the time he does get there, you will be so exhausted that you just will not care. WASTED CHARACTER AND PLOT LINE!!!! Well folks, I am out, I am giving away / throwing away the remainder of my 5 other Thor Books. I'm calling it on account of rain, rather on account of just being tired of the same old same old cut away scenes and lousy endings. Thank GOD I did not engage Lions of Luwhatever. See ya Thor, And Harvath- you could of been one of the greatest.

A pretty good spy thriller. Written some years ago, its plot was more plausible then - that diehard Soviets had instituted a nuclear plot that, years after Communism’s fall, they’d launch to vanquish the U.S. and reinstall their dastardly regime.

Scot Harvath, a Secret Service agent detached to investigate and do some cloak and dagger, gets pulled into this. A high-ranking federal agent who is more or less Harvath’s godfather, disappears, and he’s sent to look for him.

He discovers our side had its own fail-safe plot in place for just such a day, and that Gary Lawlor was its head.

Meanwhile the Russians extort the president: he can give a State of the Union the Russians have written for him, withdrawing the U.S. from world affairs, or they’ll detonate suitcase nukes hidden around the country. Lawlor’s disappearance, they realize, is tied to the Russian plot.

Harvath races around, investigating in and around Washington, zooming off to Berlin, doing SEAL stuff with a mini-sub in the Baltic Sea off the Finnish coast, and infiltrating Russia. All the while the clock ticks on the State of the Union nuclear deadline.

Like a lot of thrillers way too much happens in way too little time and places way too far apart, to really be plausible. Thor is good with the hardware and inside details, and we can forgive the implausibility. Like a lot of heroes, Harvath could get this done if he had perfect luck, healed from injuries miraculously fast, needed no food or sleep, and could do things like hack computer passwords in two minutes. Hokey, that stuff is, but enjoyable. I particularly enjoyed the Berlin setting.

It's amazing how much better Brad Thor's writing has gotten in just 3 books.

This novel had a good story which he kept moving. The relationships between the various characters (good and bad) were constantly shifting. It's not quite a Tom Clancy novel where all of the good guys work together no matter what; perhaps it's a bit more realistic.

The author provided lots of details about the weapons and gear.

All in all, I'm looking forward to reading the next book.

Brad Thor is a bona fide bad ass! Great command of the genre; excellent character development of Agent Harvath; and superb storytelling abilities! I really (REALLY) want his first Harvath novel (Lions of Lucerne) to hurry up and get on the silver screen! It would be an excellent/entertaining movie whenever it finally gets green lit! I’d give anything to be a part of that undertaking and help get it produced into a film! ...and yes, I agree that Chris Pine would be perfect for the role of Scot Harvath, but Eastwood would be a really good fallback plan!

We know what to expect from this genre of books - threat to the free world, super proficient hero chasing villains, several show downs as he follows the trail, bit of tension in the relationship department, eventual triumph over evil - and yet they are unputdownable when the story carries you along.... and this one does.

Always a good read from Brad Thor, working through his books after finishing the excellent works of Vince Flynn(R.I.P),