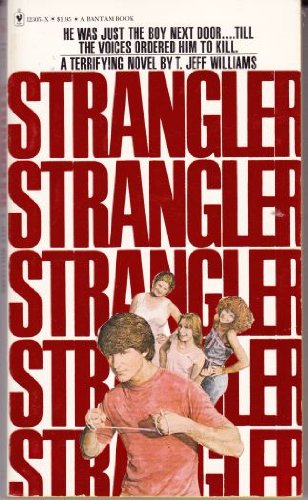 Posted by kjhsdfgwrhgrth | Published 8 months ago

PAPERBACK
View on Amazon
'Strangler' first was published in 1978 by New English Library under the title 'Sonny'. This Bantam Books version (217 pp) was released in the US in January 1979. The cover artist is uncredited.

'Strangler' is set in San Miguel, California, in the late 70s. The lead character is a twenty year-old named Sonny Sills. Outwardly, Sonny seems like a handsome, well-adjusted young man with a bright future.

But in reality, Sonny is Thoroughly Deranged.........not only does he hear voices, but they tell him to abduct, rape, and strangle teenage girls.

As the hot days of August bake the dusty roads and city streets of San Miguel, Sonny takes up life as a serial killer.......and before long, city residents are consumed with fear.

For detective Dan Eriksen, who is assigned to the case, the murders of young girls are particularly troubling, as Dan knows that his daughter Denice, a cheerleader and an all-American blonde, is exactly the type of girl most favored by the murderer.............

I found 'Strangler' to be readable, at times suspenseful (particularly in its closing pages). The use of a smaller city and its rural environs as the setting, and the at-times poetic descriptions of the farmlands and beachfront landscapes comprising this setting, gives 'Strangler' a sense of place that well recalls the seemingly idyllic California of the 70s.

Author Williams uses the rather unusual device of having his narrative alternate between chapters related by Sonny Sills in the first person, and chapters describing the actions of Dan Eriksen related in the third person. Presumably this allows Williams to impart to the reader a detailed examination of the Mind of a Serial Killer, while also adhering to the more traditional style of the police procedural novel.

Williams doesn't shy from imparting a Splatterpunk sensibility to his descriptions of the murders of the helpless teens, giving the novel an edge of nastiness that keeps it from becoming too formulaic. However, somewhat inevitably, the middle sections of the novel tend to slow, and rely overmuch on cliches involving Dan Ericksen's troubled domestic life and his efforts to participate in the Swinging Seventies lifestyle.

The verdict ? 'Strangler' certainly meets the definition of a California Crazy novel. I can't say it breaks new ground in the 'Serial Killer' suspense novel, but it's competent enough to recommend it to fans of that genre.