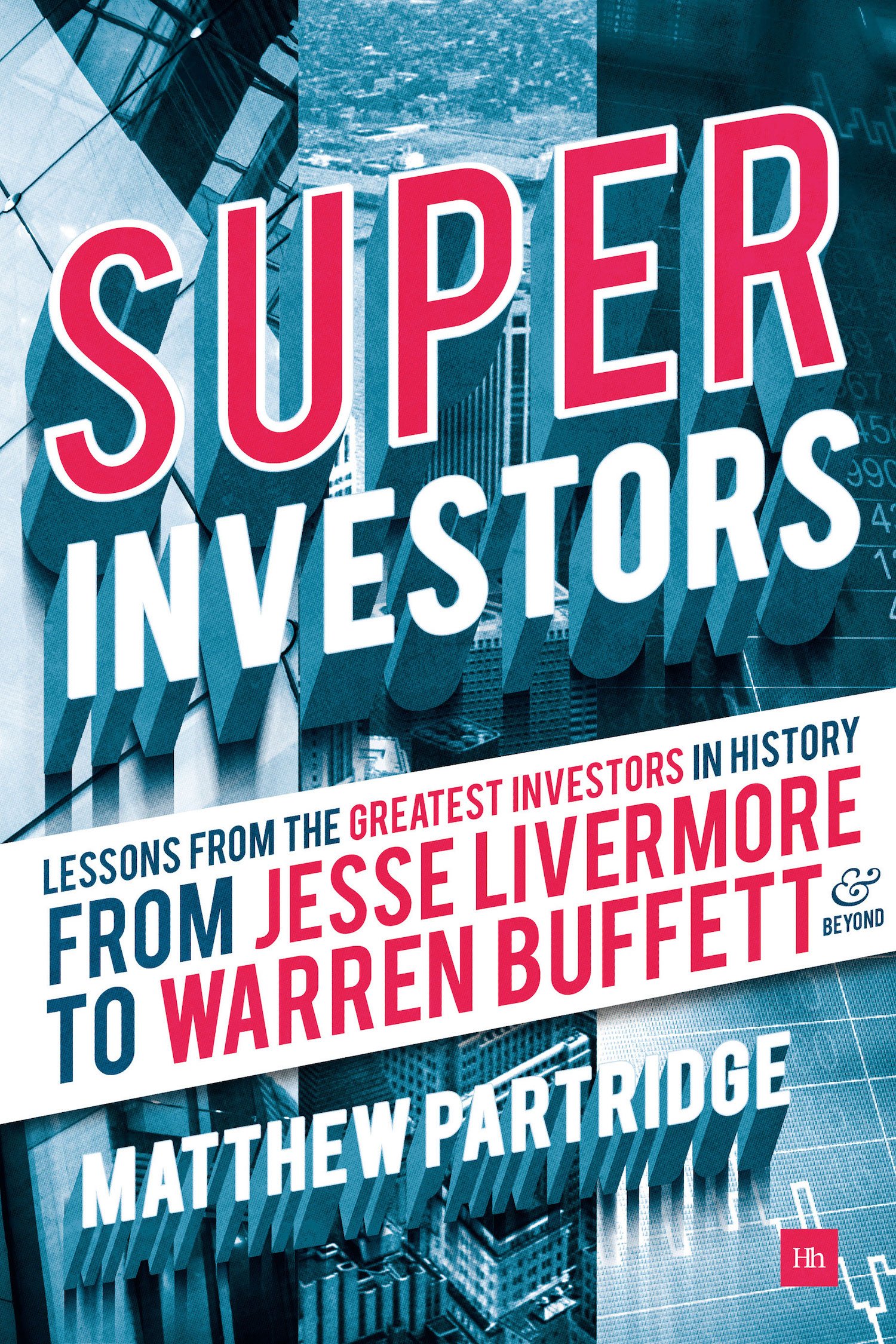 Superinvestors: Lessons from the greatest investors in history - from Jesse Livermore to Warren Buffett and beyond

LESSONS FROM THE WORLD’S GREATEST INVESTORS

There has never been a better time to be an ordinary investor. With more opportunities, lower costs and a more level playing field than ever before, you really can go head to head with the professionals. But there remains one big difference between Wall Street and the individual investor: technique and experience.

Superinvestors provides both in a new way. It takes an indepth look at 20 of the best investors in the last 200 years and shows the reader how to adopt a similar approach. These investors have been picked for a variety of criteria, including their investing excellence, the different ways in which they made money and, above all, for what they can teach individual investors.

Ranging from David Ricardo, who made a fortune by correctly predicting the outcome of the Battle of Waterloo, to the patient, valueorientated approach of Warren Buffett, this book a treasure trove of success stories, cautionary tales, legendary stock picks and worldbeating strategies. It will fascinate and inspire investors of every level.

Matthew Partridge is an experienced financial journalist and trained historian. He has a doctorate in economic history from the London School of Economics and has taught at Goldsmiths, University of London. He writes for MoneyWeek magazine, Britain’s biggestselling financial weekly.
View on Amazon
This book is at the same time in a rewarding but ungrateful genre. Learning from the best is always worthwhile and getting to know the secrets of those who have been the most successful in equity markets never fails to interest a wide audience. Still, profiling a collection of famous investors and turning this into a book has been done numerous times before – it is hard to add much to what has been written previously. In Superinvestors Matthew Partridge, a UK financial journalist, historian and previous investment bank employee, presents his selection of 20 investors to study. Further, the author takes on the hard task of rating those profiled and name the “best” investor of all times.

The structure of the book is – as expected – fairly simple. After a brief introduction 20 “super investors” are portrayed and the book finishes off with the conclusions the author draws from the many individual fates and fortunes. For each investor the reader is served with a short personal and professional history, a discussion on the investor’s method, his performance and potential mistakes made. Then Partridge seeks to distill some learnings from the above and ends the section with a rating where the investor gets a score from 1 to 5 on performance, longevity, influence and ease of replication for the private investor. Many of the profiled names like George Soros, Warren Buffett, Benjamin Graham and Peter Lynch will be well known to many readers.

Although it’s always arguable who should be included in such an illustrious group I would have made some different choices. Even if it is quaint that Paul Samuelson privately acted at odds with what he preached as the high priest of efficient market theory I don’t think that his profile, nor the one on fellow economist David Ricardo (1772-1823), adds much to the discussion and the venture capital pioneers of George Doriot and Kleiner & Perkins feels a bit misplaced. Further, there is obviously much to learn from Jack Bogle but he is more successful as a businessman and advocate of an idea than a successful stock market investor. Who would I want to see instead? Jim Simons, James Chanos and Seth Klarman could in my view be fair alternatives. On the other hand the book benefits from the author’s deep knowledge of UK investors who are less documented in literature and Anthony Bolton’s track record in China will come as a surprise to many – as it did to me.

In my opinion the texts on UK investors Neil Woodford and Nick Train were the most interesting. Also, even though I had heard of Robert Wilson as an early short seller, I knew nothing of him. Overall Partridge, with some minor disagreements, in my view gives a short but fully accurate picture of the investors I had previous knowledge of. The author is clearly well read and even the cover is inspired by Ken Fisher’s 1984 book Super Stocks. My only objections are that I think George Soros’ concept of reflexivity is too vaguely described and given its huge influence on the hedge fund community and its closeness to the current concepts of complexity theory and adaptive markets it is a bit harsh to say that the theory has left little mark. Further, to describe what Ed Thorp did as “nothing new, but more systematic” is to diminish a person who long before academics Black and Myron Scholes came up with an option pricing model that allowed rational derivatives trading.

Even though the book is over 200 pages long it is an easy read and it is quite tempting to time after time read “just one more profile”. The conclusions at the end are sound but hardly novel. So who does Partridge rank as the best investor of all times? Those on the short list are Philip Fisher, Buffett, Bogle and Graham (skip Bogle and add Soros and Thorp and I would have agreed). The winner is Graham, much thanks to his huge influence on later day investors. A good choice.

It is never possible to do an investor justice over 6 to 8 pages. However, it is through books like this that many up and coming investors have gotten a glimpse of their role models for the first time.

There have been over a dozen books published over the years on the most successful traders, investors, and hedge fund managers. These include three books on traders written by Jack Schwager, and others authored by Ari Kiev, Fari Hamzei, Ronald Chan, Cathleen Rittereiser, Lawrence Kochar and Ian Floyd. Matthew Partridge, a British author, joins this group with a worthwhile glimpse into the investing approach of twenty noteworthy individuals. Although this book does not provide a comprehensive review of each investor/trader or their many successful trades, it does provide a well-written and enjoyable look into their careers and accomplishments.

As a voracious reader of investment books over the last 60 years, I was not surprised to be familiar with sixteen of the profiled individuals, however, I had not heard of two individuals from the UK and two others from the US. Among the individuals profiled are well-known names such as Warren Buffett, John Templeton, Jack Bogle, George Soros, Peter Lynch and Jesse Livermore.

This book features insight into the investing career of a varied group of professional investors. The author provides a brief 7- to 10-page profile of each person using the same format. That is, Partridge begins with background information on the individual, followed by a discussion of their investing approach, their best or worst trades, what can be learned from them, and finally an overall numerical score for that person. The rating is an overall number with 20 being the highest score focusing on four categories: performance, longevity, influence, and ease of replication of their strategy. Fortunately, the author rates each category separately, using one to five stars which provides useful to the reader. For example, a reader who is looking for performance could focus on those individuals who received a five star rating. Not surprising were the top 3 scorers: tie with 18 for Graham and Bogle, and 17 for Buffett.

At the book’s conclusion, Partridge provides a summary of the ten key lessons learned from these investors. He posits that Graham was the best investor of all-time. Readers may disagree with that choice, but this book is a worthwhile addition to the category. Also, readers who want to obtain more detailed information on any of the investors profiled in the book can use the Internet and other books to further their knowledge. Anyone considering investing in the stock market for the first time or even with years of investing experience will benefit from the insight provided by these super investors.