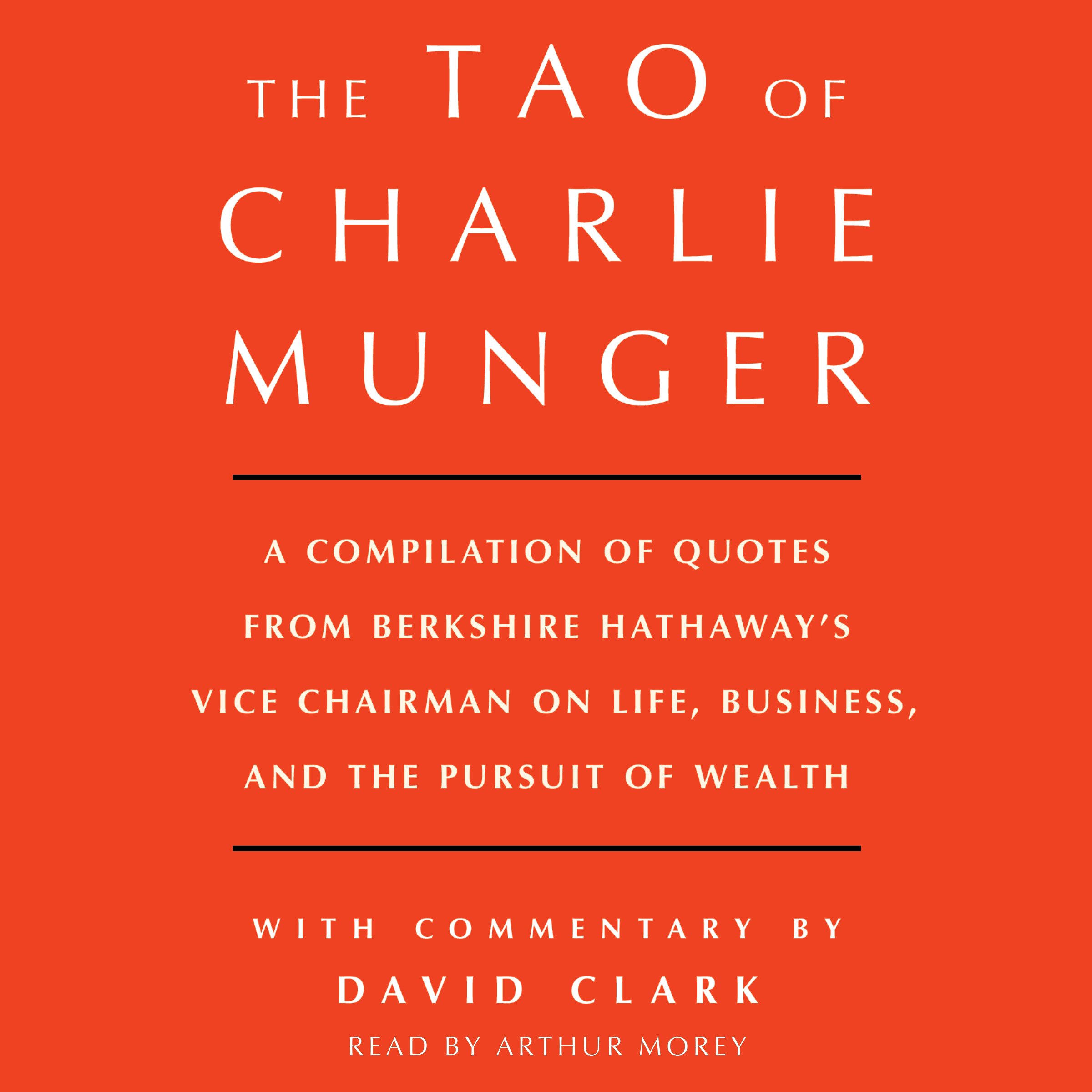 Tao of Charlie Munger: A Compilation of Quotes from Berkshire Hathaway's Vice Chairman on Life, Business, and the Pursuit of Wealth with Commentary by David Clark

Words of wisdom from Charlie Munger - Warren Buffett's longtime business partner and the visionary Vice Chairman of Berkshire Hathaway - collected and interpreted with an eye towards investing by David Clark, coauthor of the best-selling Buffettology series.

Born in Omaha, Nebraska in 1924 Charlie Munger studied mathematics at the University of Michigan, trained as a meteorologist at Cal Tech Pasadena while in the Army, and graduated magna cum laude from Harvard Law School without ever earning an undergraduate degree. Today, Munger is one of America's most successful investors, the Vice Chairman of Berkshire Hathaway, and Warren Buffett's business partner for almost 40 years. Buffett says "Berkshire has been built to Charlie's blueprint. My role has been that of general contractor." Munger is an intelligent, opinionated business man whose ideas can teach professional and amateur investors how to be successful in finance and life.

Like The Tao of Warren Buffett and The Tao of Te Ching, The Tao of Charlie Munger is a compendium of pithy quotes including, "Knowing what you don't know is more useful than being brilliant" and "In my whole life, I have known no wise people who didn't read all the time - none, zero." This collection, culled from interviews, speeches, and questions and answers at the Berkshire Hathaway and Wesco annual meetings, offers insights into Munger's amazing financial success and life philosophies. Described by Business Insider as "sharp in his wit and investing wisdom," Charlie Munger's investment tips, business philosophy, and rules for living are as unique as his life story; intelligent as he clearly is; and as successful as he has been.

View on Amazon
If you collect quotations from one of the broadest thinkers in business who for decades has delivered witty and wise sayings, you cannot really go wrong. The Tao translates as “the way” or “the path” and what we are served here is the way of Charlie Munger, vice Chairman of Berkshire Hathaway and long business partner to Warren Buffett. Munger’s many sayings have over time gained enough status to be christened as “Mungerisms.”

The reference to Taoism is equally apt when it comes to the format of the book. Just as Lao-tzu, the Taoist collection of saying and proverbs, this is a commented assortment of quotations where David Clark, co-writer of the many Buffettology books does the observing and deciphering of the wise musings of the old master. Buffett obviously has a wonderful way with words but I have always enjoyed Munger’s shorter, sharper and more cynical statements more and Clark has done us all a huge service collecting these quotes. It is a book possible to read in one, albeit long, sitting – but please don’t. Take the time to scribble down how Munger’s thoughts reflect on your investments, business and being. Does this make sense to you? If so, how are you living up to it? What can you change? What can you improve?

The selected quotations are grouped into four parts covering investing, banking and the economy, business and philosophizing on life at large. Sections one and three are delivered with authority and Ben Graham’s saying that investing is the most intelligent when it is most businesslike springs to mind. At the same time the investing of Munger and Berkshire Hathaway is hardly unknown material due to the vast coverage of Buffett’s investing success.

The danger with adding commentary is that it isn’t always better to say something in a lengthier format when it has already been delivered crisp and clear in a short pitchy way. There is a balance to be kept to not over-explain things. Clark is mostly on the right side of the tracks but he delivers rather similar explanations to many of the quotes and is forced to add quite a few “as we have said earlier”.

Further, just as it comes to later commentary of, say old Taoist texts, it is always possible to debate if the interpretation of the original scriptures from one specific scholar is optimal. Occasionally I would have chosen to make alternative reflections. I think the selection of quotes Clark has made is a good one. Perhaps it could have hade been tilted a tad more towards psychology given Munger’s wisdom in the area. There are few real gems missing apart from this favorite on investing “It’s not supposed to be easy. Anyone who finds it easy is stupid.” – a typical Mungerism in it’s lack of flattery.

The second part of the book is the least interesting - but every time one hears figures about the gross exposure of global derivatives one marvels. The best and most inspiring part is the fourth, on Life, Education and the Pursuit of Happiness. Below are some of our favorites. “Being rational is a moral imperative. You should never be stupider than you need to be”; “Spend each day trying to be a little wiser than you were when you woke up. Discharge your duties faithfully and well. Slug it out one inch at a time, day by day. At the end of the day – if you live long enough – most people get what they deserve” and especially close to our heart “In my whole life, I have known no wise people who didn’t read all the time – none, zero. You’d be amazed at how much Warren reads – and how much I read. My children laugh at me. They think I’m a book with a couple of legs sticking out.” Amen. If you ever find yourself hesitating over a decision, simply ask yourself “What would Charlie Munger do?”

The book is very insightful and written in an easy to digest way. I highly recommend it to anyone interested in the way Charlie Munger became so successful.

The incredible mind and brilliant analytical approach of Munger is clearly explained with examples. For those wishing to enhance their own thinking and analytical skills this is a gem.

Everyone just starting their career should read this book and immediately have a discussion or two with an elder family member to validate the information. It is not a quick guide to wealth but it is a sure one.

Great Book especially for Investors,plus many good life lessons. I thought it was so good I read it 3 times, and also bought acopy for my son.

i had high hopes as I've seen him speak. soo disappointed. oversimplified...vague...not too much depth. so many other books that can be more helpful than this one if you are looking for some insight into life's lessons. i'd pass for certain.

Quotes are expanded on by the author, which is what you would expect. Sadly the author never adds any value with his point of view. I'd even go as far as saying that he often succeeds in detracting value. I too often found myself thinking how obvious the explanations were, or how much I disagreed with what the authors added. After a few pages I ended up just reading the quotes, that's just not enough to cover the price tag.

Some readers may not like the 'torn edge' finish on the pages (or do I have an ex-review copy' but the binding is good and the content valuable.

The commentary on the quotes did not sit right with me a few times and I actually thought Charlie's quote was trying to say something else. The commentary was also quite simplistic. An average read.

If you are new to the world of money and investing or spend much time watching experts express their opinions on business channels then this is a must read. For old Charlie Munger hands like myself there are still a few undiscovered nuggets.
Charlie Munger spends much of his time in the country club card room. Even though he comes from a different continent and culture and race and social strata I can understand and fully appreciate the world he comes from.
I to used to accompany my grandmother as a little child on her daily routine in the cantonment club card room during the summer holidays. It was a world of good manners, politeness and afternoon tea served with tasty snacks and swear words and abusive language were never uttered. A world far removed from the dealing rooms and bucket shops of Wall Street with their "get rich quick" culture.

not that interesting as a book, it is just collecting some phases from Munger, a very good investor and bright mind, but this book it's just a collection, nothing else.

Good read for anyone interested in getting general wisdom about investing and more.5 stars because author has covered a lot in a concise book.Way better than the book 'Poor Charlie's Almanack'

Had a good time reading such a wonderful book.
The best thing about this book is it describes the core principles that everyone should have