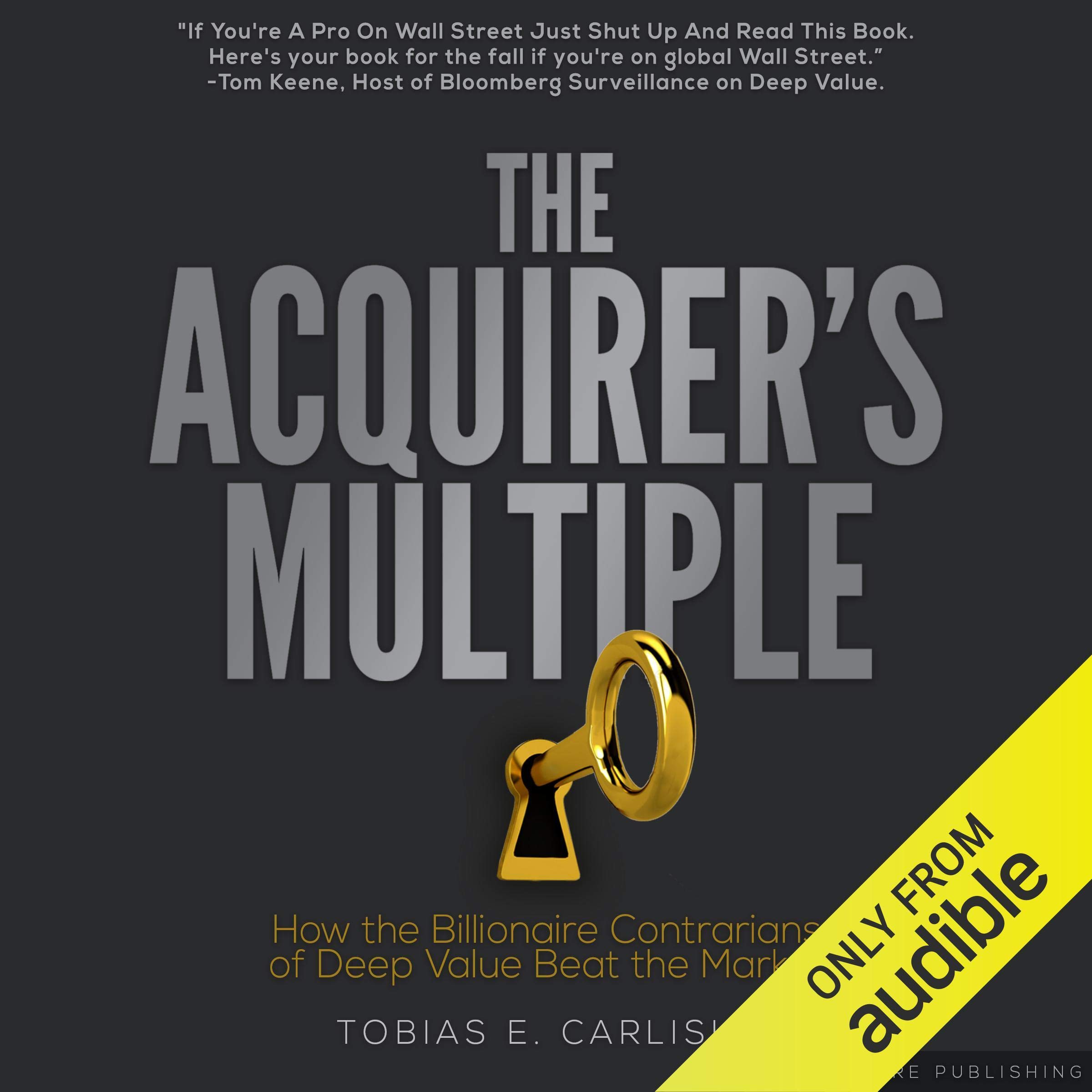 The Acquirer's Multiple: How the Billionaire Contrarians of Deep Value Beat the Market

The Acquirer’s Multiple: How the Billionaire Contrarians of Deep Value Beat the Market is an easy-to-follow account of deep value investing. The audiobook shows how investors Warren Buffett, Carl Icahn, David Einhorn, and Dan Loeb got started and how they do it. Author Tobias Carlisle combines engaging stories with research and data to show how you can do it too. Written by an active value investor, The Acquirer’s Multiple provides an insider's view on deep value investing.

The Acquirer’s Multiple: How the Billionaire Contrarians of Deep Value Beat the Market provides a simple summary of the way deep value investors find stocks that beat the market.

View on Amazon
relatively short book, but over simplified at times - you should “zig” when the crowd “zags” typical contrarian emphasis (you can’t beat the market if you buy the same things, you need to buy different things, but still be right). Good review of Buffett’s Dempster Diving days where he was doing cigar butt investing, buying graham style investments and squeezing/liquidating them. Then he talks about the magic formulae (see readings about Joel Greenblatt) beating the market. Then he talks about the aquirer’s multiple which beats the magic formulae - similar idea with magic formula, except special emphasis on low debt and high cash holdings of the company. He really emphasizes reversion to the mean in terms of stock price and leading businesses profits declining overtime due to competition. He has an antigrowth stance generally speaking - states that only warren buffett is able to find business with protective moats that protects its profits.

I appreciate content about activist investing - although this is very difficult for a low net worth individual investor to do (buying a significant percentage of a business in oder to influence management to unlock value and run a better business). I would give this book a B to B+ (I tend to have high standards now that I’ve read so many investment books - but I must admit, I probably don’t follow Carl Ichan as much as I should for coattail activist investing).

He argues that returns are better if you buy fair companies at wonderful prices vs wonderful companies at fair prices. Which I may or may not agree with - I think it depends - it's kind of like the argument of where is the best value? that can be found in growth stocks or "cheap stocks" with cheap stocks you're hoping that it's cheaper than it's liquidating value, assuming that you are able to take over and liquidate the company or hope someone else does the work for you and is successful. sometimes companies are cheap for good reason - i've had my fair share of those. I just can't sleep soundly and ignore news using the liquidating strategy. If i had all the time and little more money, i think activist investing would be good for really advanced people - people who actually manage money for a living.

Great ideas in this book. I was disappointed at first because it was expensive yet it is fairly short. However after plowing through it I realize it is short because there isn't any filler. I appreciate that.

My favorite book ever was Joel Greenblatt's Little Blue Book That Beats the Market. The Acquirers Multiple expands even further on Greenblatt's quantitative formula... and being a geeky Engineer both books really speak to my heart.

I am now convinced and I will dedicate a portion of my portfolio to Tobias' formula for investing. Thanks

He spends a lot of time talking about Warren and other people that bought companies. In particular, he mentions people whose family or friends gave them enough money to start their on firms. I recall one was given 600K. I'm going to assume most readers aren't going to be buying entire companies nor get 600K from their families.
I realize he used these stories to try to prove a point. However, it doesn't add anything to his equation or idea.
It doesn't take many pages to tell people-find something that has taken a beaten, is out of favored, here are a couple of equations to double check their value and buy those.
Also, notice on page 145 where he offers proof the Acquirer's Formula beats the market. In the 50 million example, the years of 2011-2015 and 2017 the market beat the Formula, funny. That's SIX of the those last seven years it didn't beat the market.
On a positive note, the part about Enterprise Value and Earnings was good. I think he should have taken out some of the stories of these rich people and supported his ideas in another manner.

Even for relatively unsophisticated investors starting out this book is a gem. It takes you through a modified value investing approach including the basics of the balance sheet right up to making sophisticated decisions about your own approach. It can be read quickly but is worth going back through it in some detail, then following the author on his own web site. When you realize how much voodoo investing is out there, you need this book to hack your way through the fog to a clear, rational, and disciplined approach.

I highly recommend this book. The most important takeaway is the principle of mean reversion and how failure to recognize it can lead investors to mistaking an apparently bargain-priced stock for one due for a period of under performance. The author correctly notes that very few companies have enough of a competitive advantage to sustain above average profit margins over time, and thus buying recent market "winners" typically leads to less than optimal results. A very useful resource for those who manage money or actively invest on their own behalf. Further, the portions about the early days of Warren Buffett, Carl Icahn, and Dan Loeb are interesting and informative and provide information not widely known.

If you have read Tobias Carlisles previous books, you will find nothing new here. What you will get, is a summary of his earlier books with more concrete advice regarding how to actually implement the strategy described in the book. This is also what the author aimed for, and achieved.

From the start of the book I got the feeling that the author had done a lot of "copy-and-paste" from his previous books as there are a lot of short paragraphs and a somewhat non existing storyline. That improves later in the book. There are also some typos and language errors that can change the meaning of a sentence, but from the content you can easily identify those and they don't cause too much trouble.

Regarding the content I'm really pleased, and it was an enjoyable read with "to-the-point" statements and advice. Recommended.

Started to use this for selecting shares for my SIPP. Bought two shares and one is up about 7% and the other has gained over 20% within a couple of months. A highly recommended approach that I've not seen mentioned anywhere else. Give it a go, it's better than the usual stuff.

As from a non financial background I have found this book very easy to read and understand. It has provided an insight into how the businesses are valued and how once can look for cheap bargains in the stockmarket.

I would definitely recommend this book to anyone who is interested in value investing.

Interesting theory around investment selection and value investing. Certainly going to follow some stocks on this basis to see how they perform. Theory seems sound and logical though.

I absolutely loved reading this book and, like all great finance books, envision it becoming one that I come back to and re-read year on year.

A friend and I have followed Toby's methodology, subscribed to his screener and now hope to look back on this book in the future and be glad that we were lucky enough to discover it.

As someone looking at value investing this book really helped me get started!

I loved reading The Acquirer’s Multiple - Concise, to the point & actionable! I feel an urgent need to now read Deep Value!

Utterly trivial. Save your Amazon vouchers.

For me personally as a "small investor", Mr. Carlisle's book is an absolute must-read in the financial area. Mr. Carlisle has succeeded to explain me the central concepts of Value Investing in a nutshell. In reality, it's just damn hard to invest in the opposite direction to the herd mentality ("Zig when the crowd zags"). To get through this psychologically, you need a very good understanding of key mechanisms such as Mean Revision and a strong and tested guideline or framework on how to proceed. In fact, this book contains the 'Golden Key' (as shown on the front page of the book) to eliminate difficulties in understanding the Value Investing principles in general and delivers a practicable formula to beat the common market indices in detail. A great job!

So much of chase for growth stocks and momentum investing in recent bull run (2017). And then this book says value beats everything. Markets beaten by growth stocks which are beaten by moat stocks but value beats them all. This one is must read.
Book on mean reversion

The aquirer's multiple turns out to be EV/EBIT... not the newest thing.
Then it shows that, according to a "simulation" done, it will beat any other formula.
And finally you find out that they sell screenings of the "magic" indicator in their web page. Not unexpensive, by the way...
In the meantime, a couple of vague ideas as "be a contrarían" or "buy undervalued", with some Buffett quotes here and there, and many graphics going high up.

The author describes his methodology for identifying undervalued and inexpensive companies and how these have performed well over longer periods. I skimmed through more than half since it got repetitive.

It's ok but very basic, goes over same material as his other book "Deep Value" but in much simpler terms. Probably a bit too simple, I found the other other book did a better job at simplifying the concepts without being overwhelming. This book is much shorter so that might be a plus. Ok but "Deep Value" is better.