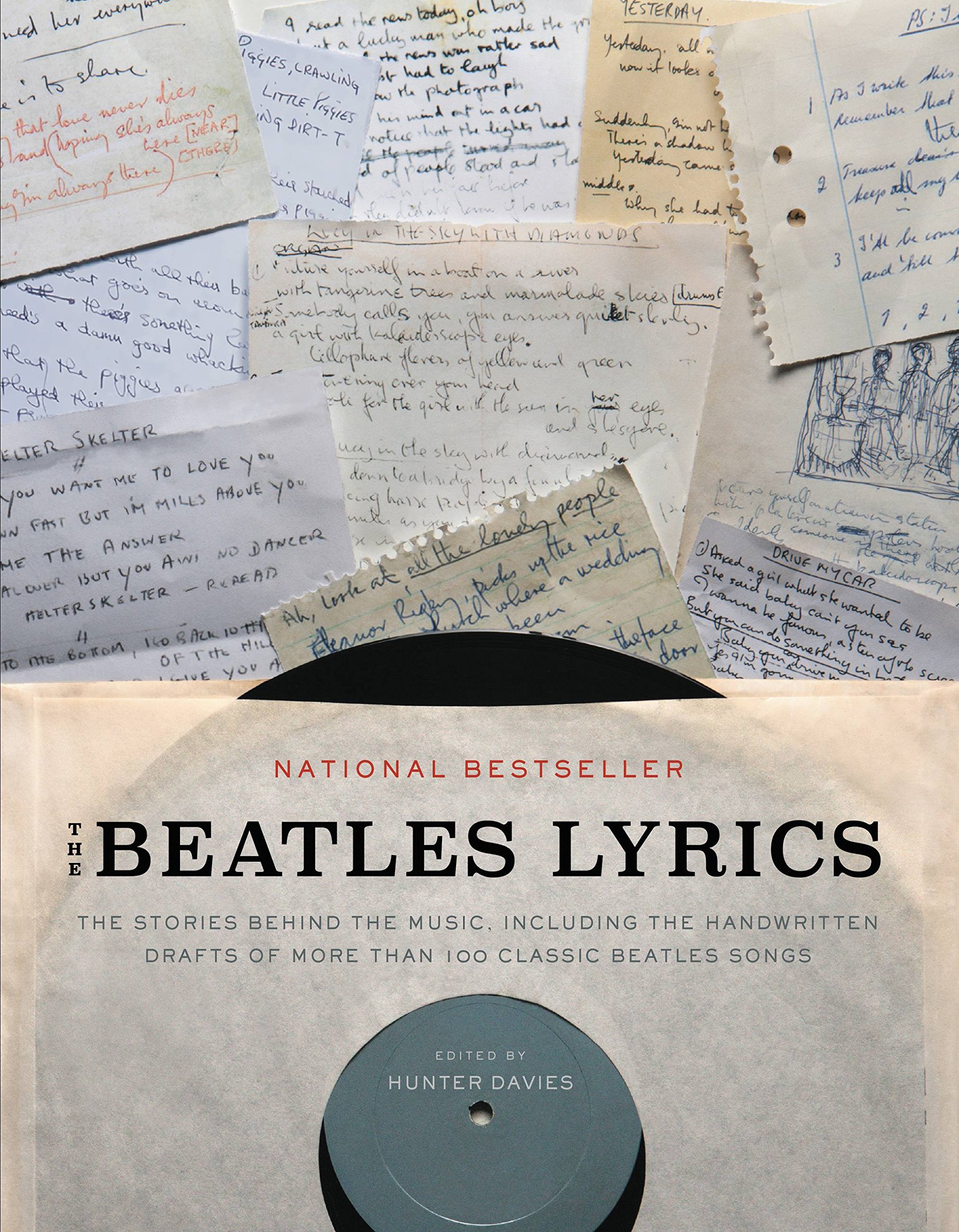 The Beatles Lyrics: The Stories Behind the Music, Including the Handwritten Drafts of More Than 100 Classic Beatles Songs

Many books have appeared over the years about the Beatles lyrics -- about the words of those songs which the whole world knows and sings, and will sing for ever, as long as we have the breath to hum the tunes. But no one has ever tried to track down and publish the original versions of the classic songs -- showing the words in the Beatles' own handwriting, how they first wrote them, how they scribbled them down on pieces of paper or backs of envelopes, with all the crossings out and changes.

By revealing and publishing these original manuscripts for the first time we gain a unique insight into the creative process of Lennon and McCartney, how they did it, what they were thinking, how they changed their minds, and then came up with the words we now all know.

Such a book has never been published, firstly because of copyright reasons, with ownership divided between Michael Jackson and Sony, and secondly because no one has been able to track them all down. The author of the only authorised biography of The Beatles, Hunter Davies, has sought out nearly one hundred Beatles lyrics. His expert introduction describes the creativity of the greatest ever rock band -- then he lists and illustrates each song, in chronological order, putting each song in context: what the Beatles were doing at the time, how and when they came to write and then record it, how the original version differs from the final one. The wonder is that almost every Beatles song has a great story behind it -- whether it is 'In My Life', 'For No One', 'Yesterday', 'Eleanor Rigby', or 'Yellow Submarine'.

View on Amazon
Not a book about how they developed songs! The printed lyrics are mostly just the final versions written (usually) in their handwriting for fans. I went to college and read books on how the famous poems developed over time, lines were crossed out, rewritten, polished, which teaches you how to write better. This is not that kind of book. Just an ordinary Beatles tome, there are others much much better!

I have read several Beatles books and read this one expecting to learn a bit of the story behind Beatles songs. The book exceeded my expectations as it turned out to be a chronologically-structured biography. I particularly appreciated the insight (via witness account) of how songs were written. You can clearly envision the Beatles creative process (if you could use the word “process”).

Of the scores of authors who have published books about the Beatles, Hunter Davies is the best. His 1968 "Authorized Biography"is by far the most accurate and accessible account of the years prior to The White Album. His access to the band, their manager (to whom the book is dedicated), their producer (Sir George Martin), and their friends and associates, results in (a) accuracy and (b) first-person immediacy. His writing is clear. His research is impeccable. Who better to tell the origin tales behind the songs?
One of the delights of this tome is that it can be opened to any page with certainty that what one finds there is both interesting and fun. It can be read front-to-back, or the reverse, or just starting from the middle, if what interests you primarily are the songs.
If, like me, you like to know context and background, the traditional approach -- begin at the beginning -- is probably best. But if (like me) you have loved the Beatles for 52 years, just pick up the book, let it fall open where it may, and enjoy!

There are hundreds of books about the Beatles, but this one is so different and shows actual notes from the band coming up with songs. A great gift for any Beatles fan- i promise it’s different from what they already have!

Excellent read for any Beatles fan. Mr. Davies collection of personal experiences, manuscripts, hand written lyrics, etc, all make this a very interesting read. Easily look up a song you are curious about, or read through like a book, and the author does a fantastic job of telling a fluid story of the Beatles history.

If you’re a Beatles fan, you’ll love this book! It contains stories about the songs, pictures of original notes as they were writing them, and talks about their lives as well. I can’t wait to share this with my twelve-year old granddaughter who loves the Beatles!

I purchased this for a music lover in my family. When receiving the item, I leafed through the book and wanted to keep it for myself! This book has every song in the Beatles catalog, but that is not the best part...it has the hand-written notes used to write the songs! Along with personal notes to each other. It makes you feel like you're reading something personal and very special. I would absolutely recommend this!!

This was an anniversary gift for my husband and he LOVES the book!! It is done so well by the writer. There were a few obscure songs that were left out and only a Beatles super fan like my husband would miss. As yo the shipping it was perfect, it arrived the day before I needed so I didn't have to hide it very long.

Hunter Davies is an authority on the Beatles. He's written numerous books, including an authorised biography and he spent a lot of time with them, both on tour and in recording studios. I recently read Philip Norman's excellent bio of Paul and this is an excellent companion read to that biography.

Davies has, over some 50 years, acquired a large number of original bits of ephemera. Scraps the f paper with jottings, squiggles and amendments, showing the development of many memorable songs. In the recording studios, he retrieved ( with permission) bits of ciggie packets, notepaper etc on which early working notes were made. He's also trawled the world for access to other known written records, so this is a truly comprehensive insight. Combined with his personal knowledge of the Beatles, it's an authoritative and informed account.

There are numerous pictures of the scribblings; some not so easy to read on a kindle, but clearer on a tablet. Some of the originals were faded before being reproduced. Davies goes through the Beatles recordings in order, placing each disc in context with some background info. The lyrics and how they sometimes changed make fascinating reading and this is a book I've really enjoyed. A must for any Beatles fan, but also a compelling slice of social and popular music history.

It's difficult to give a book about the Beatles anything less than three stars. But despite the inclusion of
'original' handwritten copies of various Beatles songs, this book ultimately disappoints. I would describe
it as 'Beatles Lite'; there's just isn't a whole lot of new information here for anyone who knows anything
about the Fab Four. Also, the handwritten lyrics are difficult to read on the paper they're printed on-
they should have been printed on glossy paper and bound together in the middle or ending of the book
( 'P.S. I Love You' -Appendix A, page 3').
If you simply MUST own everything written about The Beatles, buy Mr. Davies' book. Otherwise, just give it
a glance at your local bookseller-if you can find a local bookseller.

Would have given this 5 except for the annoying fact that some of the song lyrics weren't included (at least in the Kindle version), so I couldn't judge Davies's comments on them.

Otherwise an interesting read which revitalised my enthusiasm for the group that shaped my early teen years. Worth a read for anyone who lived through their music.

I thought I was buying a song book, to sing along to the music but that was my mistake. I found it interesting to see how the songs were written or in some cases, cobbled together. The author clearly knows and loves the Beatles and their music. But for me there was a bit too much analyzing, after all, it ain't art, it's rock and roll!!

A fantastic document of the creation of all Beatles songs! Pictures of all the hand written and ORIGINAL song texts on pieces of paper, hotel-stationary etc. etc. etc. on which the original text often was written. It gives all the stories behind all songs and this awesome book is completed by Hunter Davis with a very interesting and a professional written 'overall' story. So a real 'MUST HAVE' for all Beatles fans all over the world! Enjoy!

A must for Beatles fans of all ages. Having read the authors other work I couldn't believe I hadn't stumbled across this. Beautifully written and gives some great insights and background to songs you've heard so many times.

As a Beatles fan I thought at the price it was a no brainier. Not much in it that I hadn’t read somewhere in the past but a great dose of self indulgent nostalgia .

Bought this as a present for a Beatles fan - feedback is great. It’s a real all rounder, good to read cover to cover but then also good to dip in and out of when looking up lyrics. Lovely photos and stories on the background to a song - absolutely brilliant

New book on the background of Beatles' lyrics.
Sometimes interesting new info, sometimes info you have already read ten times.
All in all a good readable book.
I received it quit fast and in good shape - considering it is second hand.

Great value, only flaw was the inside dust jacket flap creased otherwise perfect

Not as good as Hunter Davies' biography of The Beatles imo - a lot of the content seems to be stuff other people have said in their books or fairly blatantly obvious observations.

Was a gift to someone who loves music, I think he really enjoyed it.

Great book for Beatles fans . I guarantee you will learn things you didn’t know from this enjoyable well written book

Nice in depth explanations of the thoughts and ideas behind each Beatles song.