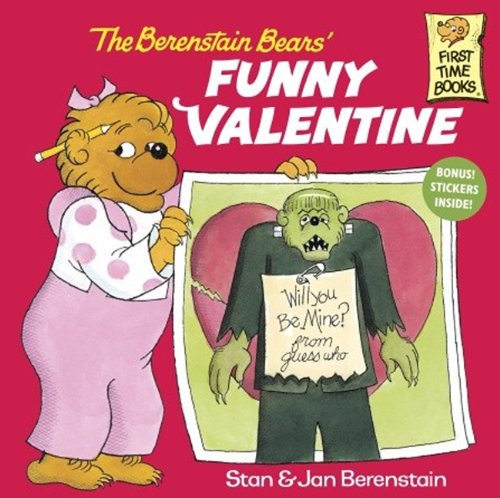 By: Stan Berenstain and Jan

FOR USE IN SCHOOLS AND LIBRARIES ONLY. Valentine's Day is just around the corner and Sister Bear has big plans to get the attention of Herbie Cubbison, the cutest cub in class, but when Sister receives an extra-special valentine from Billy Grizzwold, she may have to rethink her holiday plans.
View on Amazon
I used to love these books as a kid and figured I'd get my daughter this book as a valentine's day gift. Most other books I wanted were out of stock. First, I feel like "she's got another think coming" is a typo. Not a big deal either way. My issue is with the valentine cards she's making up that says "I need you like a hole in the head". I feel like that's wildly inappropriate wording for children. I normally don't get bent out of shape too easily, but this was definitely not a book I'd buy for my child or any other child again. I'm forever telling my child to be kind and use nice words. Meanwhile, sister bear is a bully basically the entire book. I agree with other negative reviews, bullying does not and should not mean "they're mean because they like you". Very disappointed in this book. I'd return it if it wasn't so cheap.

Several people have written negative reviews because they think this book portrays boys as being mean. Actually, it's Sister Bear who is the mean one. No boys do anything mean in this book. Sister Bear tells Billy that he better not have a worm or a dead mouse like he had other days before this book happened. He doesn't and all he wants to do is jump rope which he is not that great at doing.

The book has a standard Berenstain Bears happy ending.

I don’t read this to my daughter anymore after reading it once....There are things in this book that I wasn’t crazy about… It’s all about having a boyfriend and liking boys......and she’s only five.
There was also a part about a rhyme about needed it like needing a hole in the head....???
We are a big fan of the Berenstein bears but this book is going on the shelf for now.

the kids especially liked this one. two of them said "its so funny!"

I’ve been a huge fan of this series since I was very little and now my 4yo daughter is too! This was a great addition to our huge Berenstain Bear collection. Such a cute story

You just can’t go wrong with a Berenstain Book. It made a great Valentine gift. Beautiful illustrations. Holds the children’s attention.

Generally I love this series, but I dont love the moral of this one. The book follows the old "he's hurting you because he likes you" trope which isnt what I want to teach as okay. We kept it; but make a point to talk about what would have been better.

The stickers are a nice bonus but include some possibly offensive yet hilarious ones made by Sister. My 3 year old is now telling people she "needs them like a hole in her head".