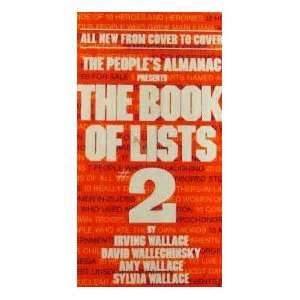 The Book of Lists 2

View on Amazon
David Wallechinsky has had 2 series that he has done a number of titles on: "The People's Almanac" and "The Book of Lists". He has done these with other members of his family (his father was novelist Irving Wallace). This was originally published in 1980 and has guest contributions from notables such as Presidents Reagan and Ford, Grace Kelly, George Foreman, Muddy Waters and many more. The lists range from historical to sports to entertainment to trivia.
Some of the lists are dated by now while others are still fresh. Wallechinsky has continued to write further Books of Lists since this one and some of these lists have been reprinted in more recent editions. It is a very quick read as if one list doesn't interest you (say 8 Unusual Dolphin Incidents), you just move on to the next one. There's bound to be things in here for most people's interests. 4.5 Stars.