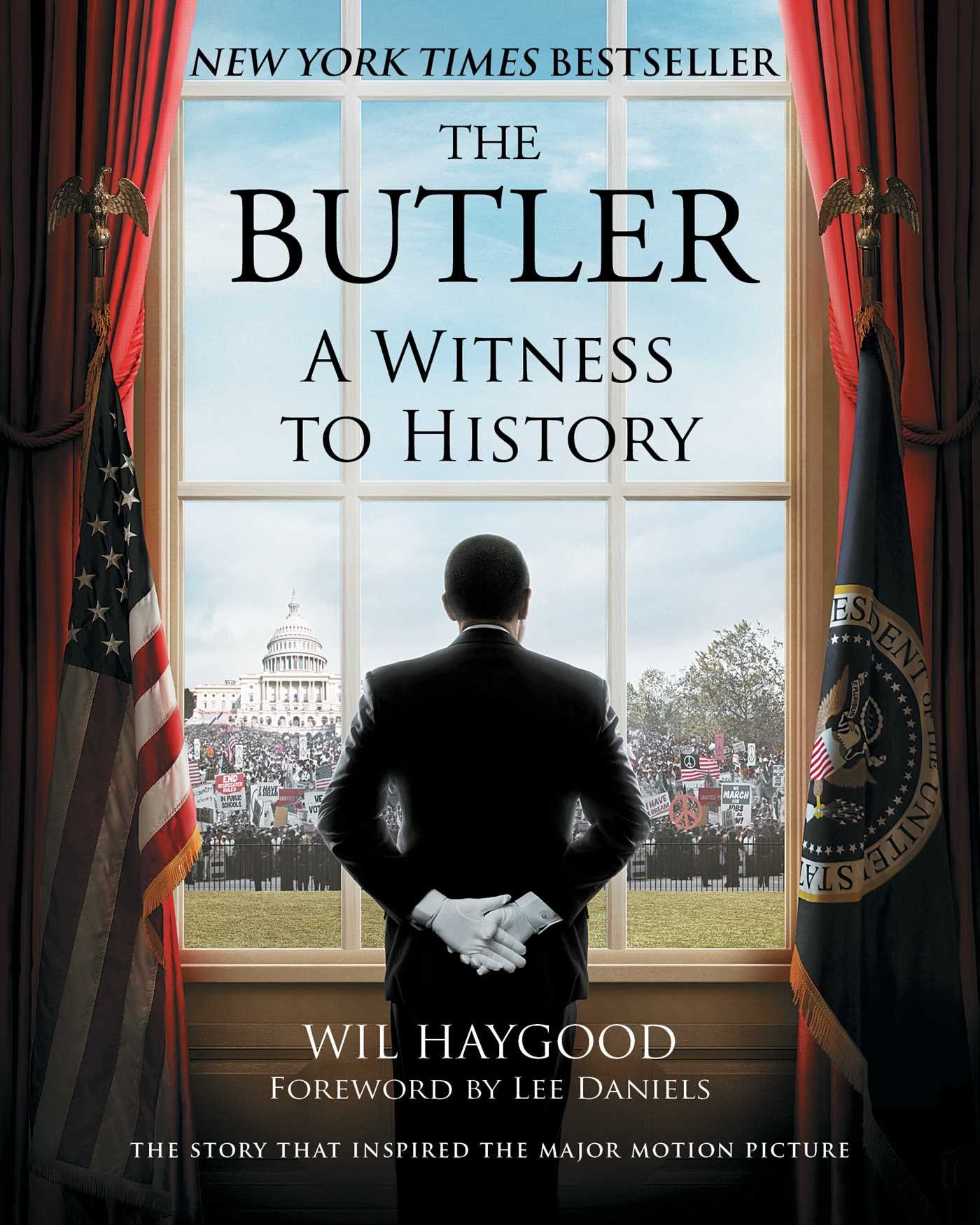 The Butler: A Witness to History

By: Wil Haygood and Lee Daniels

This mesmerizing companion book to the award-winning film The Butler traces the Civil Rights Movement and explores crucial moments of twentieth century American history through the eyes of Eugene Allen—a White House butler who served eight presidents over the course of thirty-four years.

During the presidencies of Harry Truman to Ronald Reagan, Eugene Allen was a butler in the most famous of residences: the White House. An African American who came of age during the era of Jim Crow, Allen served tea and supervised buffets while also witnessing some of the most momentous decisions made during the second half of the twentieth century, including Lyndon’s Johnson’s work during the Civil Rights Movement and Ronald Reagan getting tough on apartheid.

Timely, “poignant and powerful” (Kirkus Reviews) The Butler also explores Eugene Allen and his family’s background along with the history of African Americans in Hollywood and also features a foreword by the film’s director Lee Daniels.
View on Amazon
I was expecting some interesting facts and a great storyline... But what I got was information about the movie. Waste of money... Quite disappointed!

Whilst the original article on this man's history did inspire an uplifting film, and this book does provide a good insight into the financing and making of a movie, the story of the historic events as presented in this book is little more than a brief scan across one remarkable man's story and quick glimpses at some of the key moments in his life. This reader would like to have a view of the sweep of history that was a little richer than that presented here, and (had it been possible) a sampling of the central character's personal views on significant events and people. Sadly, a man who made history by quietly living his life and applying his talents, is remembered by a book that feels like no more than a teaser.

I can see three, no...four great ideas for non-fiction books in this one book. One could be about the reporter Wil Haygood's conception of his idea for the article that started all this and his quest to find Eugene Allen. The second could be Eugene Allen's story itself. The third could be about the history of African Americans in cinema (I'm sure books like this already exist, but let Mr. Haygood have a go at it...he's got some promising stuff in this book here.) And finally, the fourth book could b about the making of "The Butler" and all the film-making challenges that came with it. All of these are fascinating stories that I'd like to know more about. That being said, this is still a great book. But it's just too short. I have a hunch that this audio book is abridged, but regardless, I feel that Mr. Haygood has so much more material which could be put to good use...I mean, how much could they have cut out for this abridgement? One final thing I must comment on is this book's forward, written by Lee Daniels, the director of the film adaptation of Eugene Allen's life. Normally I do not like forwards. This is an exception. Mr. Daniels explains to the reading audience why he made the changes he did that caused Lee Daniels' The Butler to deviate so much from Eugene Allen's life. Knowing what his mindset was and the story he wanted to tell, I can respect his directing decisions in that film much more and I make an exception and appreciate this forward. But as for the book itself, it's an amazing story told by a great writer. Mr. Eugene Allen is an unsung figure in American history and I thank Mr. Wil Haygood for sharing his story with the world. This is a must-read. It's just too short. But nevertheless, enjoy.

Have not yet read the Lee Smith. The Butler is a scandalously brief book, very superficial, and with more emphasis on the writer than on Eugene Allen, the real butler. I had hoped for something of the substance of Ike Hoover's Forty-Two Years in the White House; the jobs were comparable, and Hoover could write well. Allen is not given a chance to say much, if anything. Very disappointing; the pictures are pretty good. I have scanned the Smith: She is a brilliant, sensitive writer of the South, focusing here on the Asheville, NC, hospital where Zelda Fitzgerald (and many others) received the primitive mental health care of the thirties/forties and burned in a hospital fire. I expect it will be a seminal Smith book, and her acknowledgments are particularly honest and brave. (So my stars there will no doubt be much greater than those I generously eked out for The Butler. See the movie, folks! The reviews of five presidents at the end are, I do admit, quite accurate and to the point.

A complete waste of money. Nothing more than a promo news release for the movie. This is the worst excuse for a book I've ever read. Read the movie reviews, you'll get more out if it for nothing.

I really enjoyed Wil Haygood's tale of the way he searched for, and found, Eugene Allen, a Black White House butler who served presidents from Truman through Reagan, and endured the racism of the White House servant system while observing, close up, the progress and success of the Civil Rights movement. Like the good reporter he is, prompted by the election of Barack Obama, Haygood doggedly pursued every lead until he found Allen, his wife, and son, then interviewed and befriended them, eventually bringing Allen to Obama's inauguration. Haygood's Washington Post article about Allen was the basis for the heavily fictionalized movie The Butler, and this book, while a very slightly expanded version of that article, is also a fairly shameless plug for the movie. Frankly, I went to the Post website to find the original article, but it is (surprise!) no longer available, clearly because of this "book." Is behind-the-scenes information about how the movie business works interesting? Well, yes and no. Yes, it's interesting enough, but come on, Haygood has already been paid, presumably quite well, for the rights to his original story, and, no, the account of how the movie came about isn't especially fascinating. Haygood's writing is always engaging, and that's especially true of the Allen story, but to charge book prices for this publication is, well, shameless.

Perhaps giving this book two stars is being a bit harsh. I was disappointed in it because it provides too little information on the subject matter. Because the man worked so long in the White House, I expected far more information about his work, his interactions with others, and perhaps other interesting information about his life outside of his job. Initially, I found an article about him in the WASHINGTON POST, which was also very disappointing. The headline read as though the author planned to introduce a man behind the scenes to readers. Instead, what the article provided an overview of several individuals, who have worked or visited the White House. In the end, we learn very little about the proposed subject. I found the same problem with this book. This was an opportunity to do a major study on an individual's experiences over decades. Nevertheless, I recommend the book because it at least introduces the subject matter to readers.

I saw the reviews of the film of the same name and after reading the comments on the book was under the impression this was the book about the same person but it is really only the journalist's account of meeting the "butler" and how the film being made. Very disappointed

Thought this would be a little boring, but, was a very pleasant read. Recommend it ,but think the film mught go a little further.

my wife loved it thank you

What a very interesting story. I would have loved to be able to meet Mr E Allen and his wife. A man with strong ethics and such grace and humility.

I bought the book because it was in a list of the 11 best political books of all time recommended by the staff at Politics & Prose Bookstore. As far as politics goes it is a zero. (Not much of anything meaningful either) Makes me wonder how it got on the list. Got 1 star because Amazon doesn't allow anything lower.

Read the other 1 star reviews on amazon.com.

This is a great book about the inspiration of the movie. While many historical books are written after the event this one makes you part of the event as if you were interviewing the butler himself & understanding time through his eyes. It will help the reader understand & appreciate the movie even more.

It was an ok read but I think I was expecting more than it was. The movie was much better and I rarely make that statement as I usually always like the books better than the movies