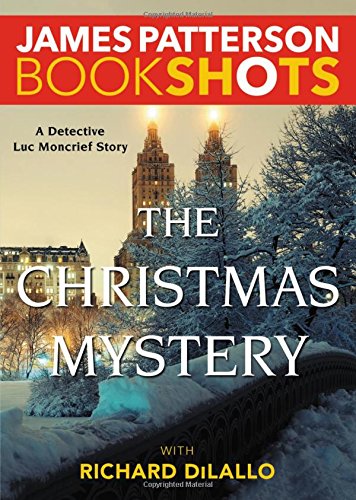 By: James Patterson and Richard DiLallo

Detective Luc Moncrief races through New York and Paris to track down a killer . . . and find out who is stealing the world's greatest art.
In the heart of the holiday season, priceless paintings have vanished from a Park Avenue murder scene. Now, dashing French detective Luc Moncrief must become a quick study in the art of the steal . . . before a cold-blooded killer paints the town red. Merry Christmas, Detective.
BookShots
Lightning-fast stories by James Patterson
View on Amazon
I almost never bother to write negative reviews. I usually figure that someone out there might really like what I don't. I'm not so sure with this one. I hoped it might be a fun, simple read for waiting in lines, etc. during the holiday season. It was simple... to the point of being someone's rough draft I think. And as a mystery... There was no mystery. The crime was "solved" in the first few pages and worked its way to a painfully dull close. There was no suspense. There wasn't even really any romance, although the author tried to hint at a one-sided one here and there. There was really only shopping. And lots and lots of name dropping of expensive brands and stores. And a really contrived excuse for having a someone on a police department salary doing so. Actually though, if you like fantasizing about shopping, you might enjoy parts of this, Personally, I'd look for something where someone actually tried to describe the merchandise or the atmosphere and not just list his "purchases." Still, that's the only plus I can think of. I wasted my time, I'm sorry to say.

Why James Patterson is involved, the stores are dumb, things that happen just happen fast and make little sense, character development is non existent and makes no sense. Why his partner accepts h\a huge ring......I have lost my taste for these book shots, Short read, dumb plot silly ending. I think James Patterson has more than enough money

Detective K. Burke and Detective Luc Moncrief were in New York and on the trail of murder, missing paintings and mystery. After the death of a high society woman in highly suspicious circumstances, K. Burke noticed the paintings that had been on the wall had gone. When it turned out that this wasn’t the first time it had happened, links began to appear.

As the investigation took them to Paris, the intrigue deepened… but what would they find as the city of love prepared for Christmas?

The Christmas Mystery wasn’t one of the best of the BookShots novellas by James Patterson that I’ve read. Insipid and with very little mystery, it also seemed like the author was trying to show Detective Luc Moncrief in the same light as Hercule Poirot. A weak imitation in my opinion.

This is the first boring book that I have read written by Mr. Patterson. I have no idea why it is called a mystery as the murder was quickly solved in a couple of pages in the beginning. No suspense. I thought maybe a female child wrote this book. It's all about a French detective who is rich. He takes his female partner, who has a crush on him, to Paris on a shopping spree. We read about his lavish purchases in designer stores. Then, his father dies and leaves him billions of dollars more. Throughout the book, he pines for his lost love, while his partner crushes on him.Then, after buying her a half million dollar friendship ring out of gratitude, they go back to NY to their jobs. End of cute story. I almost gave it 2 stars.

Let me start by stating that I'm a big fan of James Patterson. His books usually keep me glued to my kindle! This one didn't really match the others I've read. It was an enjoyable story. I finished wanting more of the main characters, Moncrief and K. Burke. The murder (there is always a murder in a Patterson mystery) was solved early with no "comeback" twist or "oops I didn't see that coming" ending. The relationship between the detectives is interesting and a little unexpected. This was my first "book shot," so maybe I prefer a longer book that has time to develop the story a bit better.

This is a good quick read but in my opinion it goes so fast that I am constantly going back to reread thinking that I missed something. Not to be a spoiler but the ending is so boring! Not what I expected from a James Patterson book.

The Christmas Mystery introduces us to Luc Moncrief, detective from France now working for the NYPD. He loves being a detective.

He is still broken hearted about losing his beloved wife, Dalia not long ago!

He loves working with his partner, Katherine Burke, only to the outside world they do not seem to get along very well!

They work together well, and when he asks Burke to go to Paris with him when his father dies, they become very good friends.

The book is exciting and well written as all of James Patterson's books are. I hope Loc Moncrief will be as famous Alex Cross!

No spoilers here...but wow! There's not much more I can say about this book but wow just wow!!
What a story .... what a Christmas holiday ... what a mystery!!
I read this within a few hours ... I couldn't put it down ...
Trust me you won't be let down!

James Patterson would be best advised to disassociate himself from this title. Tenuous links between the bookshot series and any genuine Patterson input but this one is a real stinker. From gossamer thin characterisation - unbelievable French detective Moncrief working in US - to faux romantic intrigue with his colleague. This is truly woeful and not worth anyone's Kindle or paperback money. Give this a wide berth .