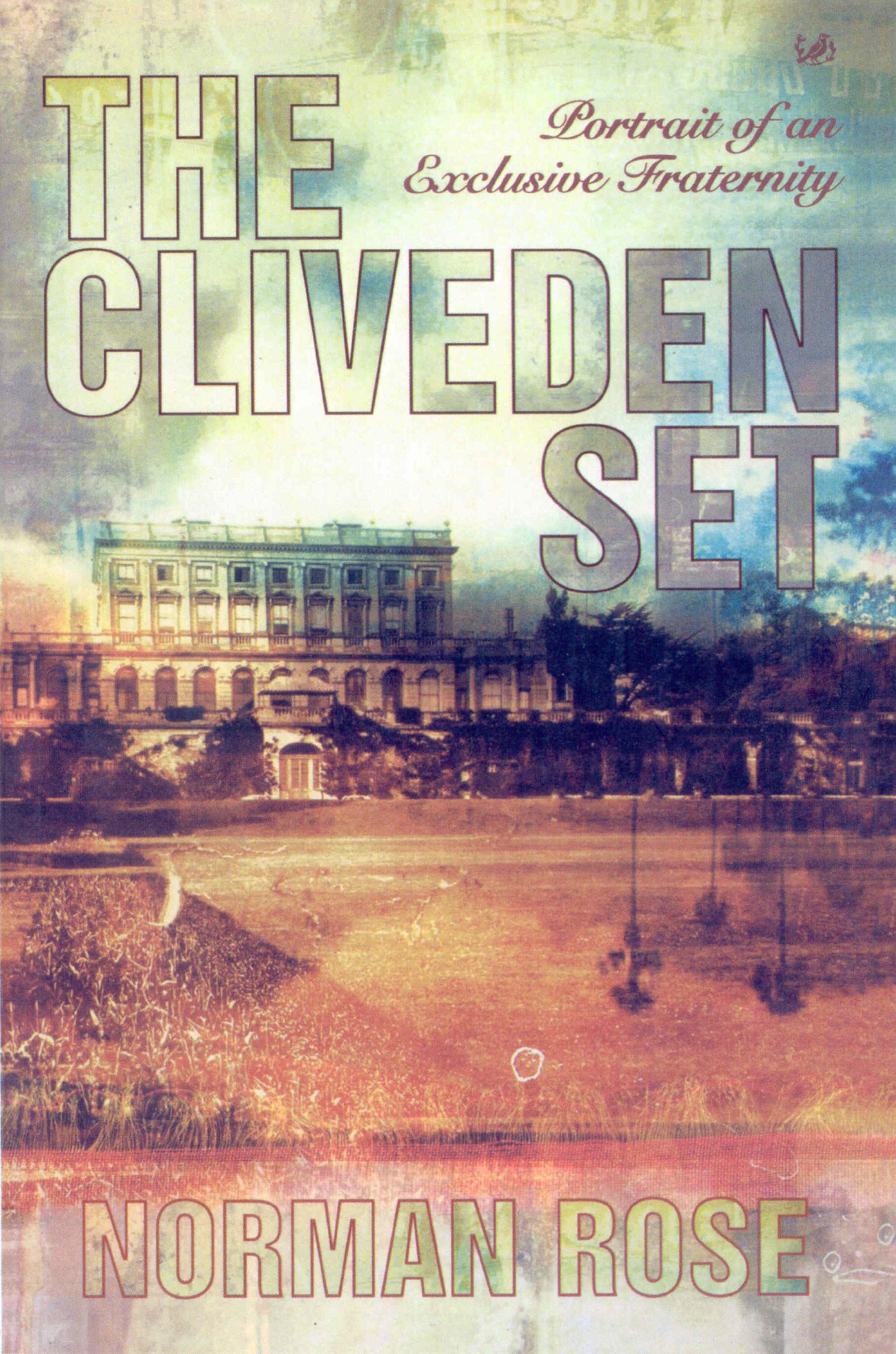 The Cliveden Set: Portrait of an Exclusive Fraternity

Lloyd George once spoke of 'a very powerful combination - in its way the most powerful in the country'. Its proceedings were invariably conducted at Cliveden, the country estate of the fabulously wealthy Nancy and Waldorf Astor. Collectively dubbed 'God's Truth Ltd', the group included leading politicians, academics, writers and newspaper editors. Its pedigree impeccable, its social standing beyond reproach, its persuasive powers permeated the clubs and institutions of London, the senior common rooms of Oxbridge colleges, the quality press and the great country houses of England. Suddenly, in the late 1930s, the 'Cliveden Set' was catapulted into uncalled-for notoriety. It had been identified as a cabal that sought to manipulate, even determine, British foreign policy in order to uphold its narrow class interests. It would use any means, however devious - even negotiate a humiliating, dishonourable settlement with Nazi Germany - to maintain its privileges, those of a decaying ruling class. But was the 'Cliveden Set' a traitorous cabal, challenging 'the constitutional structures of British democracy', or simply an unstructured think-tank of harmless do-gooders? Norman Rose discerningly probes this fascinating tale, brilliantly disentangling fact from fiction, and setting this privileged clique in the wider perspective of its times.
View on Amazon
I wanted more detail about Nancy Astor's activities. For example, when Lindbergh came to London after his flight across the ocean UPI headline ran "The King, Lady Astor, and Parliament host Lindbergh." This incident was not mentioned at all. I was disappointed.

In the popular mind the Cliveden Set (the phrase was first coined in 1937) is associated with a group of opinion shapers - politicians, newspaper magnates and commentators, academics and literary figures - who met informally at the Astor country-house at Cliveden and who were associated in the 1930s with Appeasement and even pro-Nazi or at least pro-German sympathies. But only the last third of the book deals with the group's attitude to Nazi Germany; much less well known is the story of the very close relationship between the members of its inner circle, all friends, which dates back to the years immediately after the Boer War.

Rose's book concentrates on the few individuals who made up this inner circle: Philip Kerr (later Lord Lothian); Geoffrey Dawson (later Editor of The Times), Robert Brand (later a great merchant banker), Lionel Curtis (later founder of what is now called the Royal Institute of International Affairs, or Chatham House). They were originally a group of young men from Oxford (mostly from New College) who had been selected by Lord Milner to help him to reconstruct South Africa after the Boer war.

On their return from South Africa, they were among the founders of The Round Table in 1911. Its prime concern was the strengthening of the British Empire, wanting to extend the model of the Federal Union of South Africa to the Empire as a whole. The Dominions would have none of that, and after the First World War were able to achieve their sovereign independence: the Empire was replaced by the Commonwealth. The group now made the continued unity of the Commonwealth their prime concern, supplementing it by a vision of close Anglo-American understanding.

One of their friends at New College had been Waldorf Astor, the immensely wealthy owner of Cliveden. He was married to the ebullient American Nancy Shaw. She was an indefatigable hostess, and her house parties at Cliveden brought together many famous and influential people from all walks of life and all countries. The four `friends' from the Round Table were regular guests at Cliveden.

Nancy was a woman of strong prejudices: detesting Catholics (she was herself a passionate Christian Scientist) and was chronically suspicious of Jews. In 1919 she was to become the first woman ever to sit in the House of Commons of which she was a colourful and combative member, concerning herself mainly with a range of social reforms.

In social and economic policy, Waldorf, too, was on the liberal side of the Conservatives and was very friendly with Lloyd George.

When Lloyd George became Prime Minister in 1916 and Milner entered the inner war cabinet, his supporters found themselves much nearer the centre of government.

Before the war, they had warned against the threat from Germany. But they eventually saw that the Paris Peace Conference was too harsh on Germany which was bound to seek revenge one day, and they blamed that situation on France. So began their sympathy for Germany, coupled with resentment of French policy, which was to have such fateful consequences in the 1930s.

Like many Englishmen at the time, they thought that the Versailles Treaty and later French obduracy were responsible for bringing Hitler to power, and that his position was not unreasonable. Always interested in protecting the Commonwealth, they were also nervous about Japanese ambitions in the Far East and saw good relations with Germany as a safeguard against a German-Japanese alliance. Only Brand, though agreeing that the Treaty had been a bad and fateful one, found the Hitler regime too vicious, too ambitious, and too untrustworthy to appease and advocated closer Anglo-French relations.

At one house-party at Cliveden in October 1937, those present (Brand excepted) went further and agreed with Lothian's line that an Anglo-German agreement had become essential, and that Britain should place no obstacles in the way of allowing Germany to recover German-speaking areas in Eastern Europe. Dawson supported this line in The Times , and there was sympathy for this line from Prime Minister Neville Chamberlain. On 17 November Halifax, the Lord President of the Council, in fact travelled to Germany for discussions with the Nazi leadership.

That day, an account of the Cliveden meeting was published in a news-sheet called The Week. Its editor, the then communist Claud Cockburn, had extensive contacts throughout Europe. His principle was to publish stories about secret diplomatic manoeuverings all over the world without worrying whether they could be substantiated. The story was pursued in later issues of The Week, which in December used the phrase `The Cliveden Set', and described the events there as a plot.

The `Cliveden Set' became a focus for the hatred of the opponents of appeasement. Nancy became a particular target: as a woman MP, an American by origin, and a turbulent contributor to debates, she had made many enemies in the House of Commons; and even now she continued, unabashed, to make antisemitic remarks.

All the subsequent events - Britain's acquiescence in the annexation of Austria and the Sudetenland, the replacement of Antony Eden as Foreign Secretary by Lord Halifax - seemed to be the working out of the plot said to have been devised at Cliveden - and indeed all the group except for Brand hailed the Munich Agreement and applauded Chamberlain's statemanship. They were also acutely aware (as was the government) that they could not rely on the Commonwealth to go to war over Czechoslovakia, and, as ever, such considerations weighed heavily with them.

When Hitler continued his aggression after Munich, Lothian at last saw how the policy of appeasement had failed, and now reversed his position. He had always championed close Anglo-American relations, and when the war broke out, Halifax had him appointed Ambassador to the United States, where he won many friends for Britain.

Astor had even called for an understanding with the Soviet Union to prevent further aggression by Hitler in Eastern Europe.

Only Dawson wanted to weaken Britain's commitment to Poland, and always felt that the right thing had been done at Munich. He remained editor of The Times until October 1941.