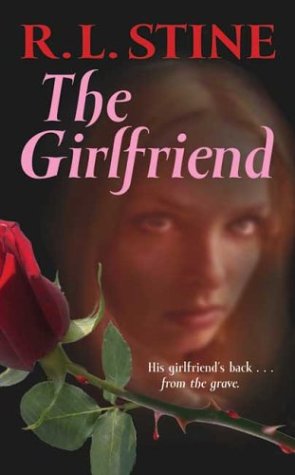 His girlfriend's back . . . from the grave.
View on Amazon
bought this for my niece for xmas she loved it

Book: The Girlfriend
Written By: R.L. Stine
Genre: YA Horror (but the spine of my copy says thriller)
Rating: 5/5 stars

Recommendation:
I would recommend buying this book instead of borrowing it.

Would you read another book by this author?:
Stine is a staple from my childhood, so of course!

Who might enjoy this book?:
Someone looking for a quick read during the spooky months. Fans of movies like Swimfan, You Get Me and The Roommate

Overview:
Fast paced and intriguing, I didn’t want to put it down. This is a story you’ve probably seen in movies a million times. Boy makes mistake of giving girl attention (or cheating with her), while he has a girlfriend. He tries to keep it secret but then- the girl goes crazy. But Stine makes me generally interested in what is happening. I can feel my heart beating faster wondering what Shannon is going to do do Scottie when she doesn’t give him the attention she wants.

The book starts off with Scottie and his girlfriend Lora at a party thrown by her parents to celebrate their acceptance to Princeton. Scottie is sad that Lora is going away to Paris for a week with her family and will miss his football game as well as the Homecoming dance. Lora jokingly tells him ”I think it would be really funny if you got a date to the dance.”

The irony strikes when Scottie meets Shannon after his football game. Being the friendly guy that he is, he offers her a lift home because she got a flat tire on her bike. He finds his mind wondering at how attractive he finds her, so he decides to take her out to dinner to spend more time with her.

As the story progresses and Scottie tries to cut ties with Shannon, she becomes very upset and starts to threaten him. Scared his girlfriend will find out, Scottie tries to handle the situation himself instead of going to the cops.

Without spoiling anything I am amazed with the description of panic that Scottie goes through near the end of the book. I felt fearful as if I was Scottie. Such amazing writing and descriptions for a YA novel.

Issues while reading:
- While my copy was produced in 2004, I am reminded that this book was written in the 90s when Stine describes things such as clothing. The only person I can picture in a velvet green dress is a toddler around Christmas time.
- Scotty is a pig who got himself into this mess.

Synopsis: Scotty Singleton has the perfect life. Scotty's girlfriend Lora DeMarco (whom he has known since the sixth grade), and Scotty are regarded as the perfect couple at Glenview High. He is the starting quarterback at his school, gets good grades, has received a preliminary acceptance to Princeton, and has a secure job at Mr. DeMarco's firm once he completes his education. The DeMarcos throw a party in Scotty and Lora's honor, but Scotty feels sad that because Lora and her parents are taking a trip to Paris for a week once the party gets over.

After Lora leaves for her trip, Scotty meets a girl named Shannon on the street and becomes attracted to her. He gives her a ride, takes her out for a movie the next day and later, they make out at her place. Scotty thinks there is no harm in kissing Shannon as Lora is not in town. As soon as Scotty shows a little affection towards Shannon, she starts becoming obsessed with him and starts calling him every day, asking him to come over. She calls him her baby, and starts appearing wherever he goes. Scotty gets frustrated and starts avoiding her.

However, Shannon makes sure to get Scotty's attention by violently killing his pet and threatens him by mentioning that her big strong brothers wouldn't like it if Scotty hurt her. She also threatens to expose their `affair' to Lora if she cannot have him. To make matters worse, Scotty sees someone following Shannon and suspects that he is one of her brothers looking out for her. Can Scotty get out of Shannon's hold without ruining his future with Lora?

Review: I must admit, I loved reading this book. Shannon gave me the chills. The ending is a little predictable, but it was so much fun to read how far Shannon would go to get Scotty, and the ways he tried to avoid her. Some parts which I found memorable in this book were when:

* Shannon breaks Scotty's fingers so that he cannot play anymore
* Shannon crashes the Autumn ball and runs towards Scotty, screaming his name
* Scotty carries Shannon to his surprise birthday party

Probably the only annoying thing which I found in the story was the repetitive use of the word `bogus'. It was ridiculous and rather unbelievable for a guy like Scotty (who got into Princeton) using only that one adjective for all his responses.

Other than that, the story is really suspenseful and kept me hooked. It fits well with the Point Horror Series.

I read a ton of Stine when I was young, and I'm collecting and rereading them now. Some, I can't believe how cheesey they are, and I'm embarrassed to admit I had read it.

This book, though, is great. He makes us feel like we really know Scotty, his pressure, the girlfriend since 6th grade, football, going to Princeton, coming from a broken home. Even though he has a date with a girl he didn't know whille Lora was away, it was no big deal and the girl couldn't let go.

Stine uses a lot of memorable descriptions here. I hadn't read the book in over 15 years, but I still remember Shannon tossing his hat, and that Lora used coconut shampoo. I have no idea why those images stuck with me, the point is they did, and this is a good story. Maybe not great literature, but fine to curl up with for a short read on a dark night.

This was the first RL Stine book that I read. And Stine is a good writer. I mean..the books that have been written by Stine are....emense. But personally I really do not like this author at all. But that's just MY opinion. But this book didn't give much of a bad expression. The topics Stine writes about are really fanatic and crazy but still the the story doesnt' get too involved in pink elephants, green aliens and the sword in the stone *rolls eyes* but I have to say it came close when this book ended because of course as many people have already mentioned it has a strange ending. It's an ending alright, and it's tolerable but I read this ages back when I was 11 or 12 and it wasn't at all scary and I remember getting banned from point horror books for my dad looked in this one and found the gruesome describtions. But you might want to read this because I certainly didn't stop reading point horror books after this one.