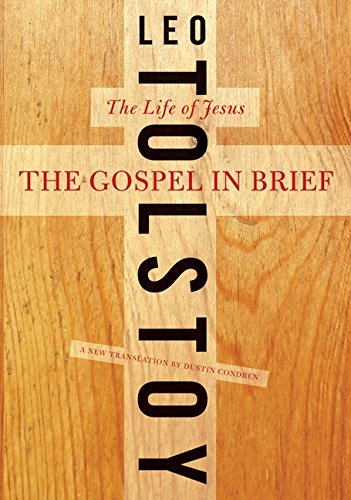 The Gospel in Brief: The Life Of Jesus (Harper Perennial Modern Thought)

By: Leo Tolstoy and Dustin Condren

The most celebrated novelist of all time retells "the greatest story ever told," integrating the four Gospels into a single twelve-chapter narrative of the life of Jesus. Based on his study of early Christian texts, Leo Tolstoy's remarkable The Gospel in Brief&#151;virtually unknown to English readers until this landmark new translation by Dustin Condren&#151;makes accessible the powerful, mystical truth of Jesus's spiritual teaching, stripped of artificial church doctrine. "If you are not acquainted with The Gospel in Brief," wrote the philosopher Ludwig Wittgenstein, whose life was profoundly influenced by it, "then you cannot imagine what an effect it can have upon a person."
View on Amazon
This is a fascinating book. Tolstoy has taken the Greek texts of the synoptic gospels and formulated his own gospel. It is written in twelve chapters followed by the first epistle of John the evangelist. Each chapter begins with Tolstoy's summation of the chapter (in italics) followed by the actual narrative. Each chapter has an epigraph from the Lord's prayer, suggesting that the sum of Jesus' teachings can be encapsulated in that prayer.

The focus is wholly on Jesus' teachings. His resurrection, for example, is not discussed. Nor is the virgin birth, Mary's immaculate conception or her assumption. The teaching is the centerpiece; it is the story; Jesus is, in effect, His message and His role is that of a teacher.

The summary comes at the end of John's epistle. This is the message:

"Whoever believes that this spirit is the son of the eternal spirit and is the same as that spirit has eternal life. And for whoever believes this, there is no obstacle in life, and all that he desires, according to the will of the father, will all come to pass for him.

And therefore, whoever believes that he is a son of God does not live in falsehood but is purified from evil. Because he knows that the earthbound world is a delusion and knows that within himself, within man, there resides the intelligence capable of comprehending all that truly exists.

The core of the message is love—love for God and love for our fellow man. The world of the flesh is nothing; the world of the spirit is everything. Hence, there is a great premium placed on divesting oneself of the things of this world and focusing completely on the world of the spirit. The story of the rich man and Lazarus, e.g., is central to Jesus' vision, as understood by Tolstoy. So too is the aphorism about the camel passing through the eye of the needle (= the difficulty of the rich entering heaven).

This is an austere message and one that might have been particularly meaningful for someone whose first name was "Count". I think it is particularly telling that Wittgenstein was influenced profoundly by Tolstoy's book. He did in fact give up his family fortune to focus on the world of the spirit.

This is specifically a review of the February 2011 version of the book translated by Dustin Condren. There was one reviewer that said the Isabel Hapgood didn't do a great job with the translation. In the Foreword of the 2011 edition, Condren notes that Hapgood's translation was based on a version of the book compiled and edited by one of Tolstoy's students, Vladimir Chertkov. He also pointed out that Chertkov had made many editorial changes and had omitted the conclusion in Tolstoy's original work. Condren, however, only referred to the original texts written by Tolstoy when writing this translation.

Now, let's talk about the book. Nobody in their right mind can read this book and say that it is heresy. If anyone says that it is wrong, then he/she has some growing up to do. If you are a devout Christian, prepare for your beliefs to be challenged. If you are an Atheist, you might want to reconsider your vehement rejection of anything religious because the main message of the book is simple: love everyone.

Tolstoy does not discuss the immaculate conception or how it happened, and he doesn't talk about the resurrection. All he talks about is the life of Jesus from the time of his birth, to his crucifixion, and speaks of what he taught, rather what what contemporary religious figures would have you believe is the true meaning of Christianity.

This is a quote from the book:

"All external worship is not only false and harmful when it facilitates evil deeds, but it is harmful because the person that fulfills external ordinances considers himself correct and frees himself from the need to perform any acts of love."

If you can't relate to that or don't know anyone who does that, then you either live under a rock, or you do not have the mental capacity to process information. We are living in a terrible place where greed and power are the predominant themes, rather than love and peace. The way religions have been interpreted is one of the leading causes of this terrible state of affairs we find ourselves in because it perpetuates the delusion that there is an "us" and a "them," creating war, conflict, and unremitting suffering. Whatever you believe, you have to read this book because it is apparent that Jesus' original message, which has since been defiled, is one of purity and love, rather than one of worshiping a God in the sky to get into heaven or escape from hell. It is all about the way you act, and not about going to church, or saying your prayers. If you pray everyday, but you curse a man with all your heart when you are backing up out of your driveway and he hits your car with his, then your prayers have been rendered meaningless. If you are a priest who preaches obedience to God, but then you go and molest little boys, you might want to reconsider what you're doing for a living.

So read the book, and start acting with love everyday of your life rather than hope to get into heaven by saying grace at the dinner table.

This is the book where the philosopher Ludwig Wittgenstein found his. It was the only book available for purchase, it changed his life. Wittgenstein wrote "If you are not acquainted with The Gospel in Brief then you cannot imagine what an effect it can have upon a person. Written by Leo Tolstoy after he had become a best selling author but was profoundly depressed.

I bought this book for a course requirement. It was a very hard read! The translation by the current author is awesome, but Tolstoy's idea of having his own version of the Gospel story was a hard concept to swallow. I gave it a shot, and though Tolstoy made some good points, I didn't enjoy his personal version of the gospels. I felt like he was just making up stuff as he went along.

Tolstoy manages to diminish the Gospel to increase it ! truly amazing result that should have every Christian thinking about their faith and the institution of organized religion. basically read and believe for yourself.

The Gospel in Brief was written roughly around 1890 by Count Leo Tolstoy. Tolstoy, more known for his books War and peace and Anna Karenina, wrote The Gospel in Brief after an intense period of depression, with thoughts of death and suicide constantly being conjured up in his mind. According to the foreword, he was, from there, said to have hearkened back to the Christian teachings of his childhood in which he had found comfort, and began his attempts at understanding the real message behind the Gospels.

In my ongoing attempts at trying to unravel the mystery of Jesus Christ myself, a challenge made more difficult through the man-made traditions and half-truths of the Church, I stumbled upon the works of Tolstoy, a man it seems, that was after my own heart. I purchased The Gospel in Brief along with The Kingdom of God is Within You and headed off to Turkey during the summer of 2012. There is something to be said for sitting with a traditional paperback book under the shade of palm trees, all the while hearing the Adhan (Islamic call to prayer) in the distance.

Tolstoy's Christ figure in The Gospel in Brief championed the idea of turning the other cheek and giving away one's possessions for the greater good, with Tolstoy taking great precision in reviving the Christ figure that "churchianity" had locked away for so long.
The four Gospels of Matthew, Mark, Luke and John, known for recounting most of the same events shared in the other gospels, are combined together in Tolstoy's book creating one continuous story. Some stories, especially those found in the Gospel of John that are not found in the others, are of course included here too, but Tolstoy's main purpose for combining all the Gospels together, was to give both himself and the reader a reasonably clear picture of what transpired. Extracting little details from one Gospel that may not have been included in another, and then piecing them into one fully detailed event brings us, finally, a more full narrative story. To be honest, it was always an idea that I hoped someone may eventually run with, and it is quite possible that many books have attempted this long before now, but to my knowledge Tolstoy, if not the only author to attempt this idea, is most certainly the grandfather of such an idea.

One humorous thing the Christian anarchist Tolstoy injected into his book is that rather than call the Pharisees by their name, he instead called them "The Orthodox", as it appears he felt that the Orthodox Church in his day was acting in the same way as the Pharisees in Christ's day.

Another thing I should point out about The Gospel in Brief is that Tolstoy is not a believer in miracles and believes that these things were added to the Gospels (and the Old Testament) to make it into a kind of "superstitious" dogma. So for example, there is no virgin birth, turning water to wine and so on. Most of it is explained away rationally. While I do respect Tolstoy's view on this, I personally, having undertaking extensive research over the past few years into alleged human abilities, cannot entirely agree on his outlook. In saying that, I am also of the impression that it is not at all necessary to believe in the miracles of Christ to understand the overall point of his teachings, since his teachings are based on giving your excess wealth to the poor and loving your enemies, thus creating peace and understanding for all (sadly perhaps a miracle in itself).

For example, if the apparently unbelievable feats performed by Christ were enough to stop someone from being inspired both by his exemplary life and his teachings of seeking peace for all men, then the miracles themselves have become a hindrance, something which Tolstoy was quite adamant about.

Each chapter begins with Tolstoy's commentary on why he has Jesus say a particular thing or react in a certain way, giving us a more full-bodied understanding of, possibly, how we were originally meant to read the original Gospels. All in all an enjoyable read.

Some of the reviews have mentioned typos. I have not noticed too terribly many, at least not enough to distract me from reading it with ease

Riddled with typos but other than that it's fine. It's a nice succinct book to help to make the gospel more relatable.

The introduction to the history of the writing of this translation of the Gospels is good, but Tolstoy has been very selective. He appears to not want to experience the supernatural side of Scripture. Just wants selective moral teachings, which is only part of the story.