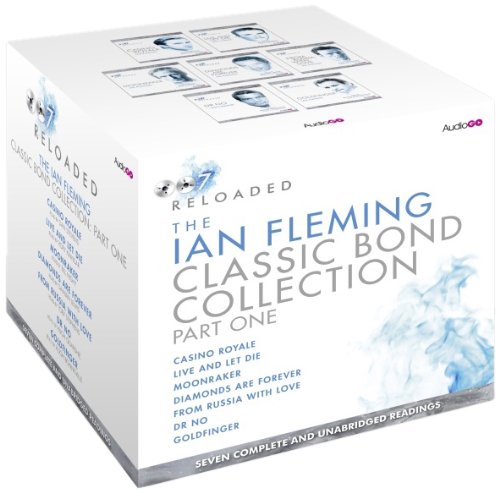 The Ian Fleming Classic Bond Collection - Part One packages the complete and unabridged audiobooks of the first seven James Bond novels in a sturdy cardboard slipcase. Details are as follows. Casino Royale read by Dan Stevens, running time 5 hours. Live And Let Die read by Rory Kinnear, running time 6 hours 50 mins. Moonraker read by Bill Nighy, running time 7 hours 25 mins. Diamonds Are Forever read by Damian Lewis, running time 6 hours 45 mins. From Russia With Love read by Toby Stephens, running time 8 hours 50 mins. Dr No read by Hugh Quarshie, running time 7 hours 55 mins. Goldfinger read by Hugh Bonneville, running time 8 hours 45 mins. In addition, each audiobook contains an interview with the reader.
View on Amazon
At last! Ian Fleming's unabridged James Bond on audiobook. Actors well chosen, and since each is different, it adds more interest. Seems that at least 13 of the books are accounted for in this format. Productions are well-done and the price for this set was more than reasonable. I wonder if the other 7 books will be coming out in a Part Two set?

The Ian Fleming Classic Bond Collection - Part One packages the complete and unabridged audiobooks of the first seven James Bond novels in a sturdy cardboard slipcase. Details are as follows.

In addition, each audiobook contains an interview with the reader.

This collection contains many of the strongest James Bond novels, with only Diamonds are Forever being somewhat of a disappointment. Diamonds never really engages, as Bond's enemies - a group of American gangsters - are less than impressive, and Bond spends too much of the story on the periphery.

Diamonds apart, it's quality all the way. Casino Royale introduced 007 to the world, and it's a taut tale of gambling and torture. Moonraker is unique in the Fleming canon as Bond remains on British soil for the whole story, tangling with the mad Hugo Drax and his rocket, the Moonraker. From Russia With Love finds Bond targeted by the Russians, and despite Bond not appearing until the story is well underway, it's one of the strongest in the series.

Live And Let Die, Dr No and Goldfinger are all strong stories as well, so there's plenty to enjoy here.

007 Reloaded boasts quality actors reading each book. As there's no music or sound effects, these readings will succeed or fail on the quality of the stories and reader. Thankfully, the choice of readers is pretty much perfect in each case, and their skillful readings mean that you soon get drawn into the story.

There's no booklet in the boxset, which is a little bit of a shame. It would have been nice to have some background information on the stories.

That apart, this a wonderful collection of the early James Bond novels, at a very decent price.

I spend about a lot of time in the car every day, as I result I listen to many audiobooks.
This set of Bond books is now going to have to go into the selected set of audiobooks that I have to ration myself on so I don't listen to them too often. That includes hobbit/lord of the rings and the hitch hikers guide to the galaxy radio series. Other good value series include the CS Lewis books, the Stephen Fry Harry Potters and the Illiad and Odyssey, but they don't have the same drug like quality as my faves, which this set now has to go into.
I want to get all the other bond books, but the title of this set teasingly calls itself Part One, so I'm hoping that they release Part Two soon, they have many of the other books available to buy individually, but alas no Part Two as yet.
There are many good audiobooks out there, such as Three Men in a Boat and Zen and the Art of Motorcycle Maintenance, but they only last me a day each. These Bond books are a substantial chunk of top quality entertainment at a price you can't beat, so it's a no brainer.
While some of my faves are there for content rather than presentation, these Bond readings are all absolutely top notch, well dramatised and acted by well known actors.

These audio books reveal Ian Flemings iconic hero as the author created him rather than the version portrayed in film. This original Bond is a civil servant, reading memos in his office and eating in the firm's canteen. But when he is given an assignment, Bond's powerful individuality emerges and the action begins. We follow the action in familiar set pieces, where the readings reveal Bond's thinking, his planning, hopes, fears and mistakes.
Although each audio book has a different reader, it is easy to adjust to another voice. The quality is high, with familiar voices including Bill Nighy, Rory Kinnear, Hugh Bonneville and Damien Lewis.
This audio series will be enjoyed by both fans and listeners who would like to enjoy the original James Bond.

Spys, Double agents and their paymasters, plus Master-Criminals and their Henchmen - beware Bond is on the case.
The plots are some what dated but serve an insight to to the hopes and fears of the UK and the world in the 1950's.
If you are a Bond movie buff, have fun spotting which parts of the plots from the novels have been lifted into the different movie scripts.
The voice cast of current popular stars, plus some past Bond movie actors is a master-stroke.

Looking forward to the Part 2 box-set.