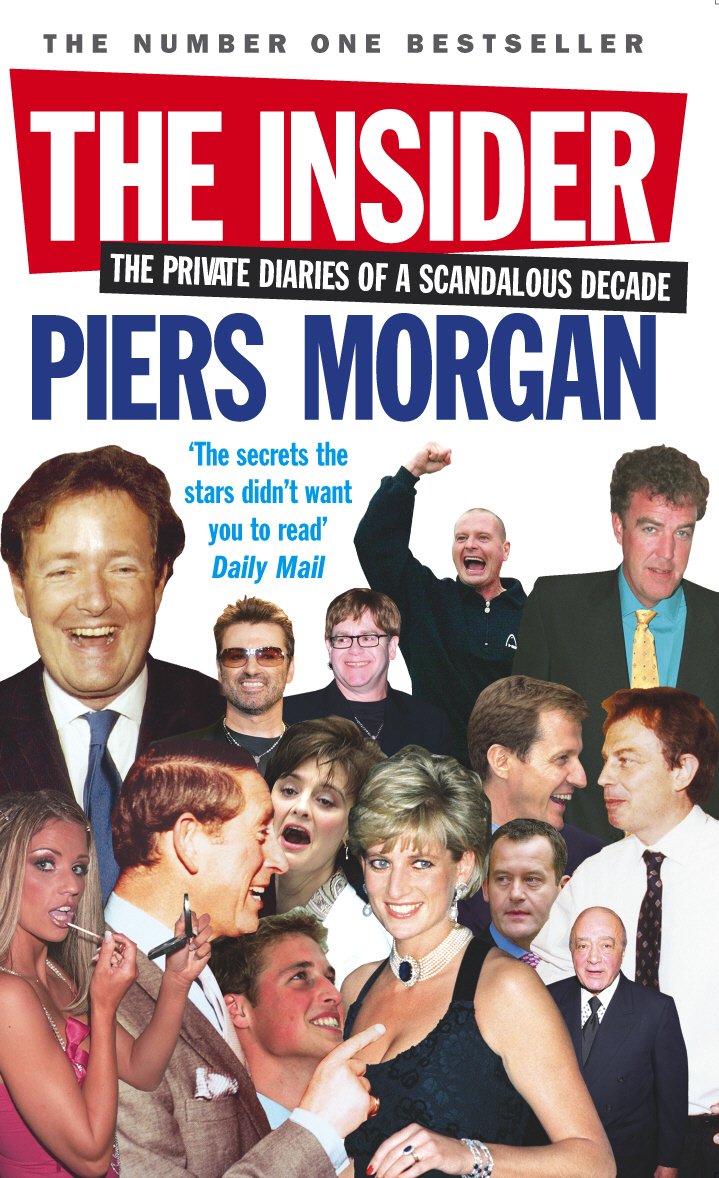 The Insider: The Private Diaries of a Scandalous Decade

The Insider dominated the media on publication in March 2005 and instantly became a No.1 bestseller. Not only did it fill thousands of column inches with its revelations about prominent political and showbiz figures, it was critically acclaimed across the broadsheets for its unique and fascinating insight into the worlds of celebrity, royalty, politics and the media.

Piers Morgan was made editor of the News of the World, the UK's biggest-selling Sunday newspaper at the record-breaking age of 28. The decade that followed was one of the most tumultuous in modern times. In a world of indiscreet dinners, private meetings and gossipy lunches, Piers Morgan found himself in the thick of it. His diaries from this remarkable period reveal astonishing and hilarious encounters with an endless list of celebrities and politicians alike: Diana, William, Charles and Camilla; Tony Blair, Cherie, Gordon Brown; Paul McCartney, George Michael and Elton John; Jeremy Clarkson, Paula Yates and Gazza to name just a few.

Entertaining, engaging and compulsive, The Insider was the most talked-about book of 2005, blowing apart every notion we have of politics, media and celebrity.

View on Amazon
This book wasn't what I expected it to be. I was slightly disappointed with it when I opened it and saw the diary style, small writing, I thought this is going to be really boring.
How wrong I was, I took it on vacation and started reading it and it was very good, I found myself reading it at every opportunity.
I am not a fan of Piers morgan but his Diary on life as a major Newspaper editor was excellent. It opened yours eyes on how Newspapers get their stories and headlines.
It was a book well done.
One little bit of advice though it is based mainly around British politics and celebrities

Because the author is Piers Morgan, I expected something more serious and substantial. I realized later that I had not paid enough attention to the subtitle, "The Private Diaries of a Scandalous Decade". So it read more like a tabloid. But if one likes that type, it's a good book.

Even though this book is almost outdated I couldn't put it down.
Great behind the scenes expose of British high society spin, media manipulation and the unashamed skulduggery employed in the competitive world of the British tabloid press.
Brilliant!

The Insider is an addictive read, providing compelling insight into newspaper editing and the role tabloids play in politics and public relations. Intriguing enough just to revisit ten years of scoops and scandals, it is most interesting to see how liberally supposed news stories get 'splashed' recklessly over tabloid covers without serious substantiation or attempt at impartiality. It also gives character to the hitherto invisible journalists behind these vitriolic, hectoring papers - often foul-mouthed, hard-drinking egomaniacs it seems - and exposing the hypocrites and sycophants in the world of celebrity. The question you have to ask yourself while reading this is whether Piers Morgan is to be trusted. The world he appears to inhabit is the same slightly dubious reality that the tabloids reflect, and Morgan is a shameless name-dropper who enjoys boasting of his relationships with Diana and Tony Blair. He seems fit to burst with smug satisfaction at doing over his rivals and is quick to point out how clever he is. He likes to think that he was, as editor of a major tabloid, one of the most powerful people in public life and politics, depicting the government as pandering to his whims. I think he overstates the case, and is perhaps a little naive, but this is no less enjoyable a read for that.

I read this years ago and was struck by the honesty. Fascinating read that first opened my eyes to how the media is just giving the public what they'll pay for. Whilst Morgan is no saint, his self awareness and unique take on the most high profile events of the time meant this book, to me, was well worth the read.

Piers Morgan comes over as an arrogant young man with an ego bigger than Ben Nevis. But that's undoubtedly one of the qualities you need to survive in the UK's tabloid wars. A compelling book, with some amazing inside stories of Britain's royals and politicians. How much Morgan actually wrote down in his diaries and how much came out of his fertile mind remains something of a mystery, In his days as editor of the Daily Mirror he never shirked from running spoof stories.

Amazing story-telling! Should be a movie or a tv series. You can't make this stuff up!

Not being a lover of our ever increasing fascination with celebrity and the pile of trashy mags being foisted at us these days eg Heat etc, I picked this up with some trepidation. As a reader of biographies I thought I'd give it a go. What can I say? I couldn't stop laughing. Have always thought of Mr Morgan as a smug git but actually found his writing both humorous and hilarious. His memoirs displayed so many of his contacts as publicity hungry (and greedy) desperados who were literally quite happy do anything for a bit air time. No doubt he had to curb a lot of what he could have written but he certainly didn't fawn over anyone in an embarassing fashion and if they got his goat he said it. Some of the book is about his relationship with politicians (Tony Blair, Alastair Campbell )which at times I found to be tedious but the rest very amusing. His descriptions of people are cringingly funny. He talks about his meetings with everyone from the Late Princess of Wales to Madonna, the part on the expolits at Marco Pierre White's 40th birthday party being probably my favourite.

I have since read Do You Know Who I Am? and enjoyed that as well.

Enjoyed this book very much , like his outlook on life and people, I enjoy his humour , he tells it like he sees it and that's good, it made me
Laugh a lot , he has a lot of the devil in him , but in a rather nice way , he does admit when he is wrong ( eventually )

This book is captivating - a real riveting read. Morgan's writing style is very witty with just the right amount of intrigue, gossip and self-deprecation to make him likeable. It's a great insight into what really goes on inside those hallowed walls of journalism. Piers name drops like crazy but it's great because we all want to know who he's met and he's very frank (saying what we probably all want to say but never do).

I found this book to be a very enjoyable chronicle of the daily life of Piers, although some of it seems a bit far fetched. However,just for fun, count up how many times he admitted to being drunk. That man can sure put it away !
The secret of a good book is how you cannot put it down. I couldn't.

I wonder if he'd have written this differently given what we now know about phone hack and the devastation it's had on so many innocent people's lives? That aside (and it is hard to put it aside) it is an entertaining read. I recommend!

Such interesting stories. Recommend if you want an enjoyable and entertaining read - doesn't matter if you're not a fan of the author.

Bought as a presentr for my sis - in - law who has raved about it. She is in journalism therefore the subject was perfect for her.

Bought for my 'good lady' she just loves the book. Written with much humour and wit in an easy to read manner.