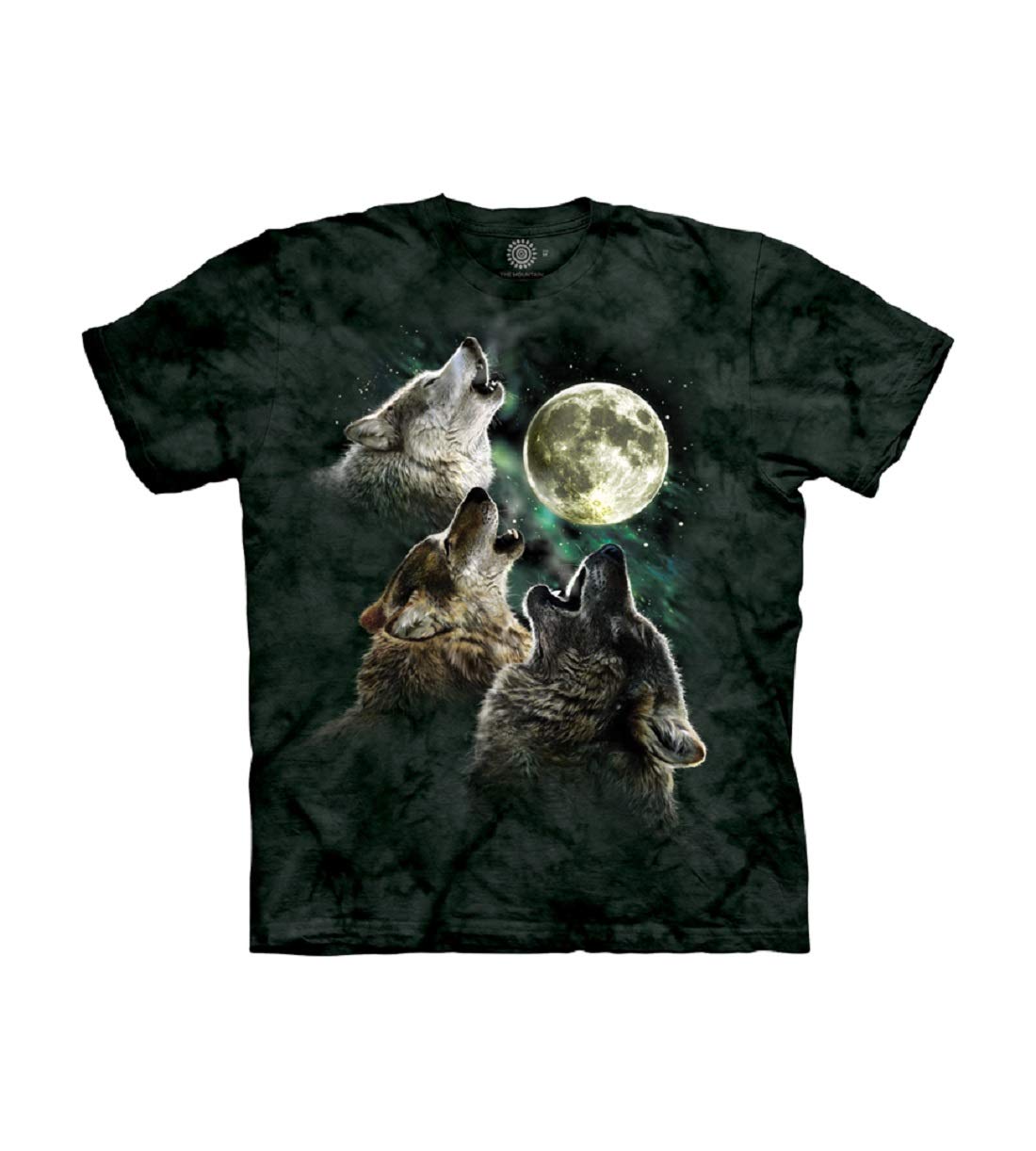 View on Amazon
I bought this product as a gift for my beautiful wife. We have three sons and she loves the military green color. I thought this gift would be perfect with its three wild wolves representing the three small pups we have at home while the rest represents me as her moon and stars.
Upon arrival, I decided to reveal this wonderful gift to her early, as I could not contain the thoughtfulness that went in to this Valentine's Day present. Her reaction was different than I anticipated.

I thought for sure she'd be excited. When I pulled that shirt out of its plastic sleeve there was a look of awestruck wonder that had appeared on my wife's face. For a moment, I thought that she may have mistaken this shirt for tickets to Disneyworld or a few scratch-offs as her expression of joy was one I had not seen since the last time I surprised her with an Oreo Blizzard. With the fury of the she-wolf that had dwelt long in slumber deep down in her bones, she attacked me and stole the shirt from my grasps. Before I could open my eyes she had adorned said shirt and had me pinned to the floor. She leaned in close and began sniffing my head and neck. I could feel her honing in on my jugular and it was at this time I first feared for my life.

Suddenly in one swift motion, she took me straight from the floor and threw me over her shoulder. I felt like an innocent kettlebell being manhandled during an afternoon WOD. The last thing I remember is the weightlessness I felt as I soared through the air. I landed so hard on our bed that I blacked out. I can’t say what happened next. This may be due to the head trauma I sustained or perhaps it is my subconscious doing all it can to protect my now fragile psyche; blocking the experience from my recollection.

I woke up two days later. I am not sure where she is now. Our pillows and cushions have been ripped to pieces in the living room and cotton covers the floors like a winter wonderland. All the shoes in the house have been torn up and it appears someone used the business end of a toilet brush as a chew toy. Our home is eerily quiet. The silence is periodically broken by moans that I can only assume are coming from an injured cat in the distance. There are claw marks on the back door as it swings wide open, allowing the cold February air to fill our home. I am scared to leave. I've now locked myself in the bathroom and am writing this review for the safety and concern I have for other husbands.

Take my advice. For Valentine’s Day, get her a gift card.

Currently running the country side with a pack of wolves after having put on this shirt. Will review later

My boyfriend who's already very hot bought it and wore it and he now looks even hotter, I can't resist him. This shirt has powers!

Received this shirt just in time for my job interview. After seeing my awesome attire, the interviewing manager offered me his job. Of course I accepted. I asked what he was going to do now? He said he would like to post for the position that I had came in to interview for. I told him that he was not qualified, but I did wish him well in his future endeavors.

I purchased this shirt recently after reading some amazing reviews about this shirt summoning magical powers. Those reviews weren't kidding around!
I wore my three wolf shirt for the first time on August 21st, 2017 and the most amazing thing occurred.

My day started out better than most. People were greeting me with smiles and esteem. I thought the magic of the shirt had done its job, until around mid-day the shirt one-upped it self. It must have summoned the power of the moon and all its glory to upstage the sun. The sky became dark like a sunset. The moon covered the sun completely as my shirt was met with glory of the power it possesses.

I took it off soon after because I was afraid it's power was too great.

Once I apply the magical wolves fabric to my chest, my mullet grew like Odin's beard, my rusted T-top Firebird turned sweet candy apple red and my White Snake tape started playing its body moving melodies once again. God life is good!

I bought this shirt as part of my Halloween costume. My best hopes were that it delivered the promise of turning me into a wolf. If not I figured I'd still have a bitchin' shirt to wear to the Halloween party. Instead I was transformed into a disappointed Golden Retriever. On the bright side I got a bunch of belly rubs from attractive women.

Thanks to the mystical power of the Three Wolf Moon, every atom of my body has been suffused with raw masculinity.

No wolves have yet caught COVID-19, so I threw away my facemask, tamiflu and hand sanitiser and bought the magnificent 2XL 3 Wolf Moon T Shirt (pictured).
I wear it permanently as a shield and am still well.
As an aside, it now smells like three animals that eat raw meat, consume their own and others' faeces and never bathe or brush their teeth which helps with social distancing.

Must dash - there's a mountain to climb, and a moon to howl at.

By the power of greyskull. I've never felt happier and now blend in to the background when on a jolly to Skegvegas or a shopping trip to Coalville. I'm now just like one of the locals. Hi-6 me duck.

It's very long. Obviously parts of me have grown to match. A little strange to be physically taller now, but obviously it goes with the superpowers.

This shirt will equip you with special powers. And good powers at that! Stunning shirt that will change your life for the better.