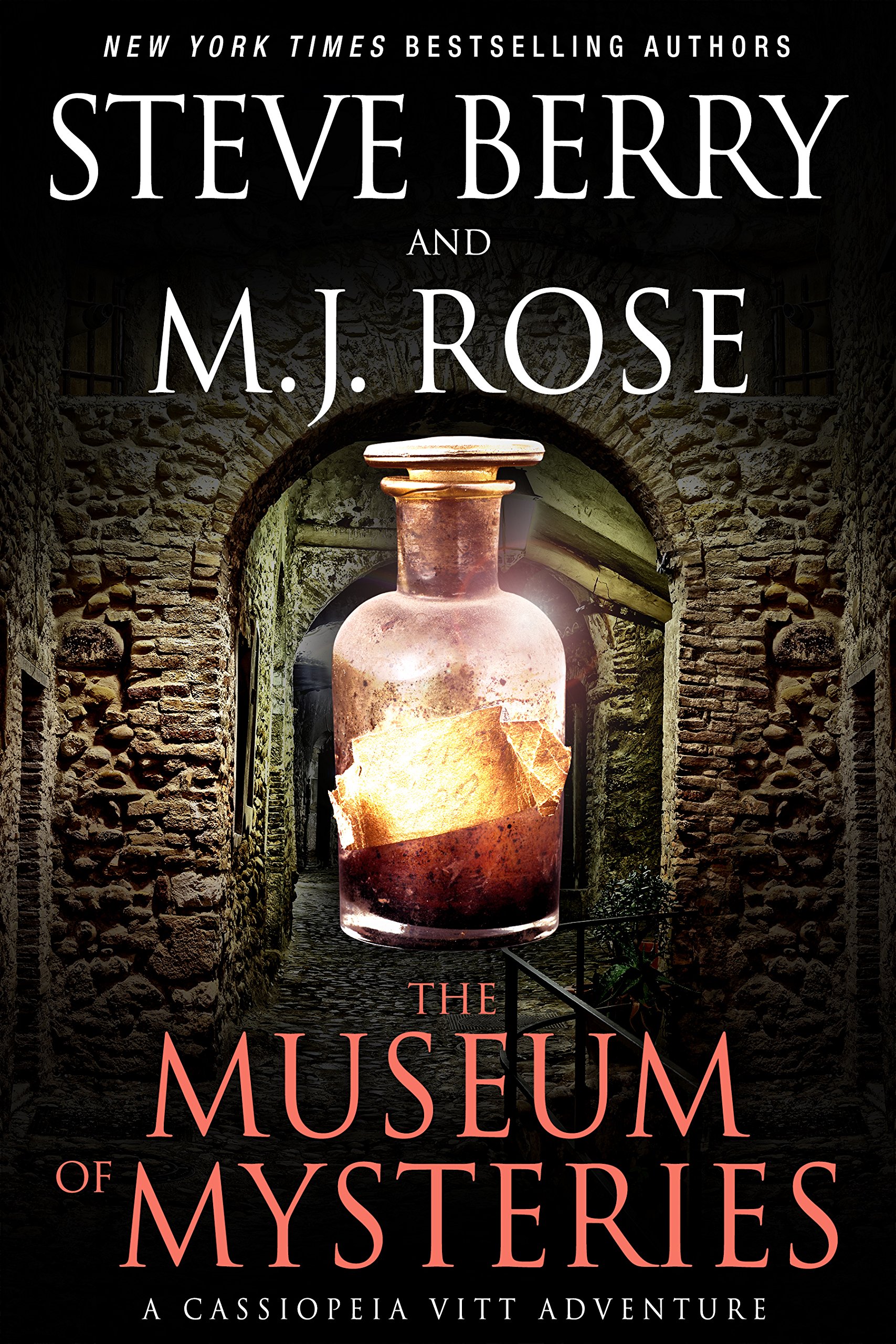 The Museum of Mysteries: A Cassiopeia Vitt Novella

By: Steve Berry and M.J. Rose

In the French mountain village of Eze, Cassiopeia visits an old friend who owns and operates the fabled Museum of Mysteries, a secretive place of the odd and arcane. When a robbery occurs at the museum, Cassiopeia gives chase to the thief and is plunged into a firestorm.

Through a mix of modern day intrigue and ancient alchemy, Cassiopeia is propelled back and forth through time, the inexplicable journeys leading her into a hotly contested French presidential election. Both candidates harbor secrets they would prefer to keep quiet, but an ancient potion could make that impossible. With intrigue that begins in southern France and ends in a chase across the streets of Paris, this magical, fast-paced, hold-your-breath thriller is all you’ve come to expect from M.J. Rose and Steve Berry.
View on Amazon
Usually a novel or story by Steve Berry is impeccably researched, the Museum of Mysteries definitely has not been. For example, a candidate for the French Presidency, one week before the election, has no security around their principal residence when the candidate is in the house. Not only that but there is a conveniently opened window on the ground floor for Ms. Vitt to climb into. Plus, the evening before a major speech is to be given there are no assistants or aides in the house just the major protagonist. The French police and security service would never permit such a thing to happen.

Then there is the statement regarding a botanical-based potion; "These concoctions are pure organic. Nature's own. They leave no chemical residue. No signature. Nothing to find in the blood or tissue." The potions include Datura which most definitely leaves a chemical signature. Where is the research and at least a modest degree of common sense?

Another lame story line is that when Ms. Vitt inhales one of the potions she discovers her past life as a luminary in the court of King Arthur. Why can't, just one time, someone's past life be as a grower of potatoes or a herder of sheep. Piling on the ridiculous premise, the main protagonist, when inhaling the same potion, joins in the same past life as Ms. Vitt. Not ten years later, or ten years before but exactly the same time. Baloney.

I am only 63% through the short story and have given up reading it with such trite absurdities in the writing. This story is not befitting the level of competency readers have come to expect from Steve Berry with or without a co-author. Don't waste your money on this story.

I read both M.J. Rose and Steve Berry and was interested to see they had worked together on this story. Is it worth the time to read? Yes it's worth the read. I though the story could have been fleshed out a little better, but then again it isn't a full novel. I've read all MJ Rose The Reincarnationist series plus other books by her and most of the Cotton Malone books by Steve Berry. So I sort of knew many of the characters without a reintroduction. Still I kept looking for something to happen, not sure what, but I kept waiting. Yes I would like to see more books with both these authors working on them, perhaps get the rough edges worked off. I guess I'm being unfair as another few hundred words could have rounded this story out very well.

I have read and enjoyed everything Steve Berry has written up until this point, including the various short stories. This latest release, however, bears no resemblance to any of his previous work. Without his name on the cover I would dare anyone to link this story to Mr. Berry's otherwise worderful storytelling. Yes, Cassiopeia Vitt is present and accounted for and there are two or three Cotton Malone name drops but I have a very hard time Steve Berry actually directly contributed to this published work. Having no previous knowledge of M.J. Rose I can only speculate that she is the true author and Mr. Berry's only involvement was allowing the use of his original character. This short story is such a complete departure from anything he has released previously that I found it impossible to believe that he crafted the words I have just finished reading.

Perhaps he wrote the present day sections and M.J. Rose wrote the flashback sections but even those aforementioned Vitt sequences feel "off" to me when compared to other Steve Berry works. Perhaps he is struggling with the transition to first person perspective. This doesn't, however, appear to be the case with his 2018 novel The Bishop's Pawn so I wouldn't put much stock in that theory.

I read Steve Berry to enjoy dramatic thrillers interlaced with historical intrigue. This story, is anything but. A ridiculous and far-fetched plot regarding Cassiopeai Vitt being the reincarnation of Morgan le Fay (yes, THE Morgan le Fay from Arthurian legend) is uninspiring and plays out like a cheap romance novel where M.J. Rose (I assume) spends a lot of time describing her sexual conquests in said past life. To make things even more ridiculous, the two primary male characters of this past life (brothers fighting each other for her castle, ect) just so happen to be brothers fighting over a ancient box of chemicals in modern day France that Cassiopeia Vitt encounters. Shame on you Mr. Berry for allowing this story to see the light of day as it will be a stain on what has been an otherwise consistent career where I have known exactly what I am going to get each time I pick up one of your books. Sadly, it might also cost you readers in the future as I have seen several comments which say as much. I will continue to read your books (looking forward to the Malta Exchange) for now and hope that this is a not a sign of things to come in hopes of appealing to a wider (female) audience.

Having read all Steve Berry's books and novellas, I am utterly suspicious as to this trivial and teeny, weeny opus' legitimacy. Steve, you must have sniffed one of Morgan La Fay's potions before you decided to collaborate with M.J. and publish this sordid concoction. I happened to lend credence to the concept of the immortality of the Soul and its myriad projections into the everlasting Present (which includes Humans' linear-based past and future) but this book's premise is absolute nonsense.
Your prior legacy will not deter me from purchasing your future works, however NOT those with Miss Rose as co-author.

I had looked forward to a Cassiopeia Vitt story but was hugely disappointed with this drivel. It’s a very strange story with half the plot as dream sequences induced from a chemical vial/perfume. There is little action which we would expect from a Cotton Malone/ Vitt adventure and hence overall I found this very poor.

I knew it was short novel but felt it ended too abruptly. Only bought it as I am a fan of Steve Berry books Ok read but wouldn't encourage me to get another by the author in conjunction with Steve Berry. Prefer the ones he writes alone. More exciting.

OK but not really what one expects or looks forward to read from the Mallone/Vitt world. A little bit disappointing

As usual Steve Berry's historical background is fascinating. Although the story has it's moments some of it is somewhat implausible.

Bought as a gift.

Since I'm a fan of Steve Berry, I had great expectations for this story. Although the plot was compelling, I wish there were more puzzles/riddles for Cassiopeia to solve. I found the sexual content in this novella distracting. Perhaps a full-scale novel would flesh out the characters and provide a more detailed adventure for our heroine.

I'm a big Steve Berry fan but this was a major disappointment. Vitt is a strong character and this story with its bodice ripping scenes and fantastical plot does her a great disservice. I finally had to stop reading as I was actually embarrassed for her-a fictional character. This novella simply doesn't mesh with the world Berry has created for his core characters.

Good plot, and some interesting perspectives, however for the price this book is only a mini novel at 100 pages. Could of easily been expanded considering the plot line. The ending appeared to be just thrown together just to finish the book.

These kind of books take advantage of readers of the excellent original publications of series with these characters.

I read a lot,but this book is very different from all the others I have read in my life.

wow another one I couldnt put down. The story hooked right from the first chapter. It really felt like I was part of the novel and I found it intriguing and fascinating as it centred around one of the areas I am interested in being past lives.

I have not been able to read this book yet. But this is my favorite author so I'm sure it's a great read.