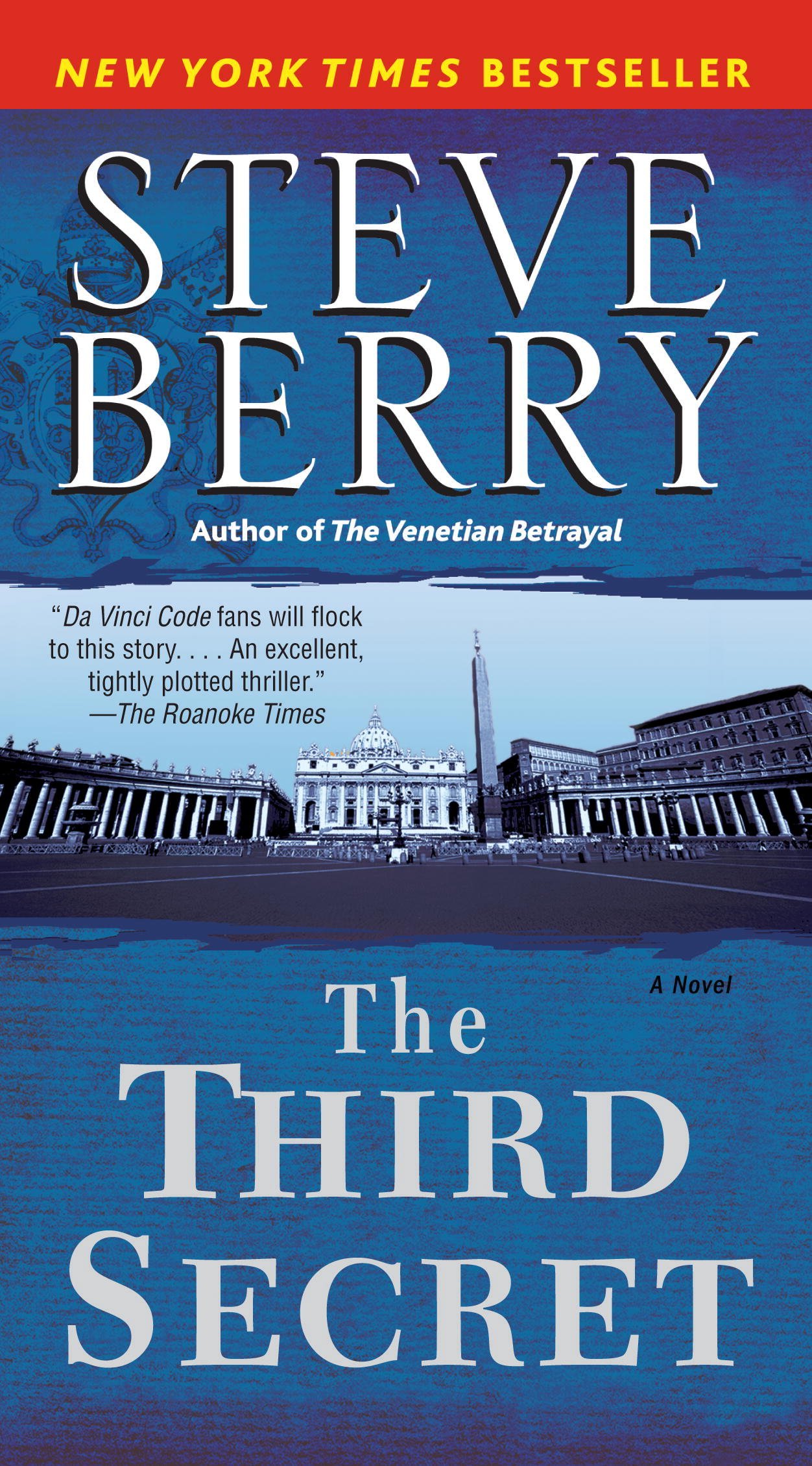 The Third Secret: A Novel of Suspense

BONUS: This edition contains an excerpt from Steve Berry’s The Columbus Affair.

Explosive in both its pace and its revelations, The Third Secret is a remarkable international thriller. Bestselling author Steve Berry tackles some of the most controversial ideas of our time in a breakneck journey through the history of the Church and the future of religion.

Fatima, Portugal, 1917: The Virgin Mary appears to three peasant children, sharing with them three secrets, two of which are soon revealed to the world. The third secret is sealed away in the Vatican, read only by popes, and not disclosed until the year 2000. When revealed, its quizzical tone and anticlimactic nature leave many faithful wondering if the Church has truly unveiled all of the Virgin Mary’s words–or if a message far more important has been left in the shadows.

Vatican City, present day: Papal secretary Father Colin Michener is concerned for the Pope. Night after restless night, Pope Clement XV enters the Vatican’s Riserva, the special archive open only to popes, where the Church’s most clandestine and controversial documents are stored. Though unsure of the details, Michener knows that the Pope’ s distress stems from the revelations of Fatima.

Equally concerned, but not out of any sense of compassion, is Alberto Cardinal Valendrea, the Vatican’s Secretary of State,. Valendrea desperately covets the papacy, having narrowly lost out to Clement at the last conclave. Now the Pope’s interest in Fatima threatens to uncover a shocking ancient truth that Valendrea has kept to himself for many years.

When Pope Clement sends Michener to the Romanian highlands, then to a Bosnian holy site, in search of a priest–possibly one of the last people on Earth who knows Mary’s true message– a perilous set of events unfolds. Michener finds himself embroiled in murder, suspicion, suicide, deceit, and his forbidden passion for a beloved woman. In a desperate search for answers, he travels to Pope Clement’s birthplace in Germany, where he learns that the third secret of Fatima may dictate the very fate of the Church–a fate now lying in Michener’s own hands.
View on Amazon
This book is about the last Marian apparitions and the governance of the Roman Church.
The catholic clergy has never taken a clear stand as far as supernatural appearances by the Virgin Marye are concerned. This uncertainty gives room to create a marvellous novel based on some historical facts enriched with the creativity, precision and skilfulness of Steve Barry.

Barry is very good at creating a storyline in which the good ones (the German Pope, his Irish secretary and a African cardinal) want to help the Church restoring the truth and the bad ones (the secretary of state and other Italian cardinals) want to help the church restoring the original faith . In this struggle, knowing the secret behind Fatima is crucial and who will succeed will be in the position to forge the future of the Church.

What I did like the most in this book? First, I could not put it done. The book comprises of a series of events that are quite unpredictable. This author does not annoy the reader with lengthy and tedious descriptions of places and feelings: the focus is always on the unfolding of the events
Second, it was able to stimulate my interest in history and specifically in the history of Church.
Barry is a declared history-lover and and his passion is able to affect the reader.

The thrilling plot and the historical base are probably two features of all Barry’s books, but I regard this even better than the one I read before, “The Romanov Prophecy”, which was already 5 stars

At end of the book Berry states accurately which facts are historically true and which are his own creations. This is methodologically very correct and shows great respect towards the importance of History.

I began reading the book expecting some exciting twists and turns before arriving at a blockbuster ending. The twists and turns were there, though some really defied credibility.The main characters held my interest, though the villains (Valendrea and Ambrosi) were too unredeemably evil and unsubtle to be believable. As the tension mounted, what I looked forward to was learning what revelations had been hidden for so many years. And then... I found out. What a colossal disappointment! If I were a Roman Catholic, I might have been insulted by the heretical nature of the contents. As a mainstream Protestant, I was insulted by the sheer stupidity -- and the author's laziness in not coming up with something better. Such a let down! I finished the book, hoping that there still might be something worth reading. Sorry I wasted my time. Two points for okay storytelling. Three points lacking for the unbelievable popes, ridiculous plot points, and a message that Mary never would have wasted her time on.

Love the factual history that Steve Berry puts in all his books. Although the plot conclusion makes an impressive reasonable resolution for a fiction story, it surprised me that it would go that direction. This author is a master of weaving a fiction story into the accurate and DETAILED facts of history. I find myself stopping and going to google to learn more about the fascinating places, items and events he is describing. Although in a couple of his books, I distinctly disagree with the fictional way he concluded his subject matter, I accept that that is his writers privilege. Even at that the pieces of his story fit so smoothly and agreeably that it makes an excellent read. Also what an exciting way to learn about so much.

There just aren’t words to express how I feel. This book has forced me, as a Catholic. To really think about things. And what better praise for any writing then that it made you think? I do have a couple of issues to take up with the author about my faith, but all in all he handled the story masterfully. This one will have my brain working overtime. Excellent read.

This was a good read until chapter 65 when the author revealed his true reason for writing the book. It was a revealing look straight into a laundry list of left-wing political causal topics...all in a couple of pages! As that point in the book approached, my imagination was running wild with what the real third secret would be so you can imagine my dissapointment when it wasnt really all that imaginative. I feel cheated and used...waste of your time and intellectual energy.

This was one of Berry's first novels. It is an extremely well researched suspense novel similar (but better) than his more recent books. Religious dogma is questioned and related to several philosophical and moral issues. Character development is outstanding as is the introspection involving personal relationships. We won't give away the plot except to say that rarely have we encountered a novel that we couldn't put aside. We burned the midnight oil on this one!

I think I’ll stick to the Cotton Malone books. This was interesting, but terribly entertaining. I would recommended passing on this unless you’re really into the ins and outs of the Catholic Church.

Of all of the Steve Berry novels, this one happens to be the slowest one he's written. It's also, in my opinion, the worst book he's written.
While Berry is always detail orientated, here he just gets bogged down in details. Further, he never really seems to get to the point. The "climax" of the book is really more of a stifled yawn.

I have a firm policy about reading a book all the way through... however this time, I almost didn't make it. Too few details, too many threats, too many political "intrigues" without the excitement to back them up & not enough of Berry's famous nail biting, adventure with death right on the hero & heroines tale.

Avoid this one... it's just not that good.

Decent book but I guess I was expecting something special around the plot involving as big a thing as the 'The Third Secret' of Fathima. In this, I felt it did not deliver. I have read a lot of his other books and he is a very good author.

This is one of the best Berry books. Held me totally gripped. I'm not religious, but I found the story, the characters and the background extremely fascinating. I have read about Fatima before, but not the other visions, this was absolutely believable and would make an excellent film.

I love these books. The research is impeccable, the storyline gripping and the characters feel like real people - although happily I have never met any of the 'baddies' so am only guessing. Once I start one of Steve Berry's books, I cannot wait to turn the pages and find out what happens. It is always sad to finish one as that means I have to wait for another to be written.

Having read three Steve Berry books before this one I was left rather confused? A lot going on switching backwards and forwards from chapter to chapter left me staggering to keep track of the plot. maybe too much referencing and historical data which detracted from the plot itself??

This was a great book and a great story line that left me Googling on the book material. A lot of very interesting views out there and a lot of possibilities and "why" questions that have not been fully answered by the RC church. I loved this whole experience!

Steve B has the knack of narrating well, and whilst there is a similarity to the storyline, there is still the urgency, the page turning will, which I haven't found recently amongst other authors - a good read.

A GOOD READ WITH AN INTRIGUING PLOT, BUILT ON REAL FACT, THEN INTO FICTION. A GOOD STORY

Not what I expected, but that's my fault.

Enjoyable story, sadly believable that the Vatican is weak & available to corruption, wish the church's doctrine was more liberal.

I really enjoyed this. For a "Dan Brown-ish" thriller the writing is above par, with a lot of enjoyable twists and turns. The story involves secret texts that some in the Vatican do not want revealed...

Not a bad holiday read.

All Steve Berry's books keep you gripped with murder and intrigue. Love them all! I would recommend for anyone to read

Really enjoyed this book. By far the best I've read so far.looking forward to reading more of Steve Berry, recommend it.

I enjoyed this book,I was fascinated by the stories regarding Marian visions and surprised how common they are. I think hidden within the Vatican archives ,there are the answers to many secrets, which hopefully 1 day will be made public.

One of the most entertaining reads in a long time. I would love to see it on the big screen sometime soon