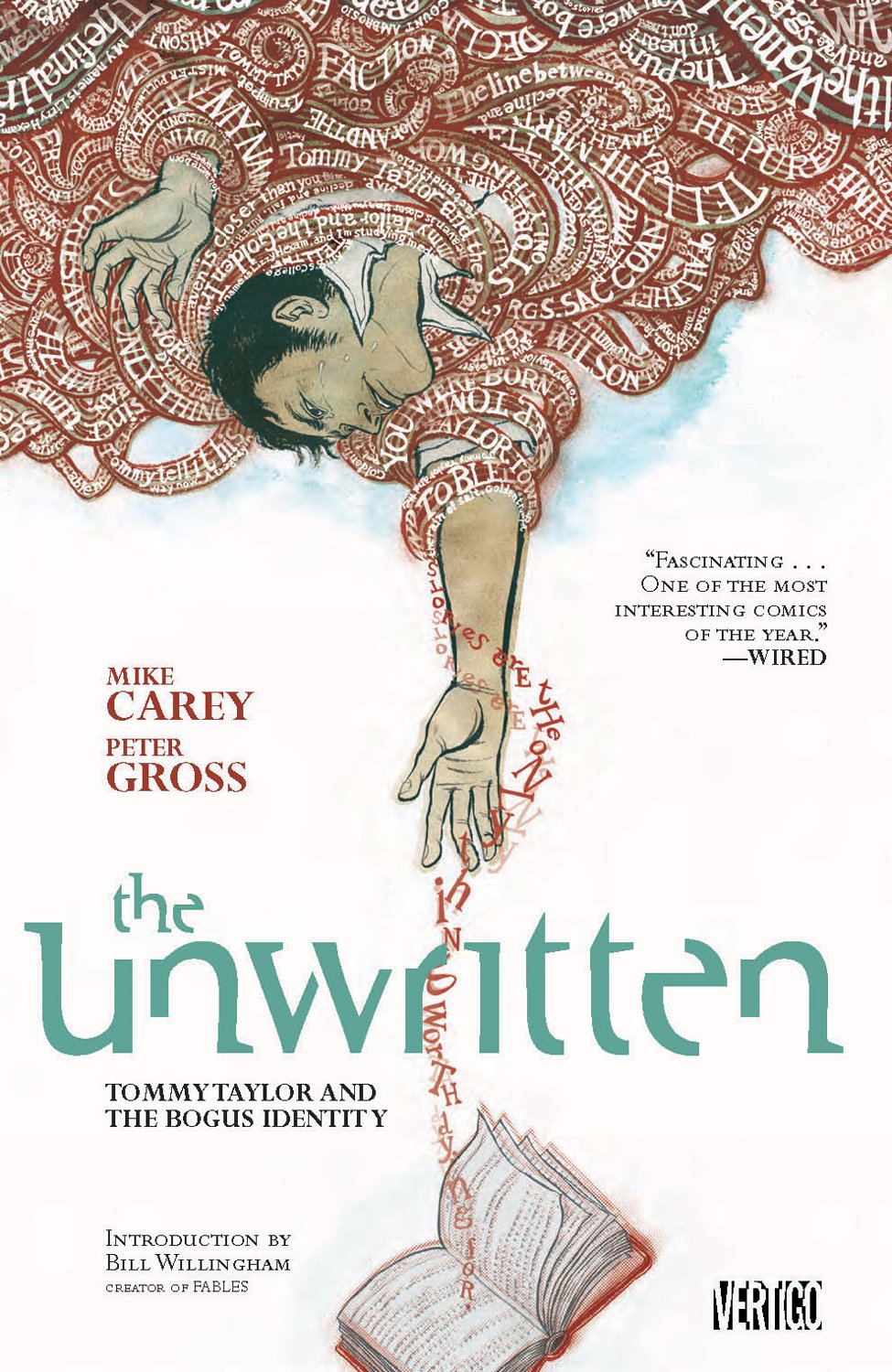 The Unwritten Vol. 1: Tommy Taylor and the Bogus Identity

Posted by 23horc4o | Published 6 months ago

By: Mike Carey and Peter Gross

"A wish-I'd-thought-of-it premise, beautifully executed. Highly recommended for anyone who thinks that fantasy can do more than just help you escape the real world." --Brian K. Vaughan, Y: THE LAST MAN

"Fascinating ... one of the brainiest and most interesting comics of the year." --WIRED

Tom Taylor's life was screwed from the get go. His father created the Tommy Taylor fantasy series, boy-wizard novels with popularity on par with Harry Potter. The problem is Dad modeled the fictional epic so closely on Tom's real life that fans are constantly comparing him to his fictional counterpart, turning him into the lamest variety of Z-level celebrity. In the final novel, it's even implied that the fictional Tommy will cross over into the real world, giving delusional fans more excuses to harass Tom. When an enormous scandal reveals that Tom might really be a boy-wizard made flesh, Tom comes into contact with a very mysterious, very deadly group that's secretly kept tabs on him all his life. Now, to protect his own life and discover the truth behind his origins, Tom will travel the world, eventually finding himself at locations all featured on a very special map--one kept by the deadly group that charts places throughout world history where fictions have impacted and tangibly shaped reality, those stories ranging from famous literary works to folktales to pop culture. And in the process of figuring out what it all means, Tom will find himself having to figure out a huge conspiracy mystery that spans the entirety of the history of fiction. Collects issues #1-5 in this NEW YORK TIMES bestselling Vertigo series by Mike Carey (LUCIFER, X-MEN LEGACY and ULTIMATE FANTASTIC FOUR) and Peter Gross (LUCIFER).
View on Amazon
I bought this for two reasons; I have read and enjoyed Mike Carey's Felix Castor series and some of the Hellblazer series so I hoped the writing would be good. I was also seduced by the cover - which is always a bit of a mistake because covers are usually done by different artists.

I liked the premise. Tom Taylor's life is coming apart. He's struggling with his self esteem, trailing a series of failed career attempts as he rides the gravy train of his involuntary alternative identity, the boy wizard in his father's mega selling world famous book series. Things start to unravel when a journalist publicly challenges his identity and his fans turn against him. The story is disjointed, flicking between Tom Taylor's present 'real' life, flash backs, forays into his father's 'Tommy Taylor' series and lots of borrowing from familiar classic fiction. As this is the first few issues of a long series, it is to be expected that it is a highly unfinished story.

On the whole, it reminded me of Neil Gaiman's Sandman series, borrowing heavily from other peoples' work, repackaged into a new narrative. I confess I'm not entirely sure how I feel about that; I can't decide whether it's new and clever, or just lazy meta-plagiarism that conveniently fills the pages. For example, "How the Whale Got His Throat" by Kipling is reproduced in it's entirety.

I'm also a bit ambivalent about the artwork. While perfectly competent, I found the style a little bit staid and I wasn't sold on the muted colouring. I'd love to have seen what someone more visceral, like Ben Templesmith would have made of it.

This book on the surface is a Harry Potter pastiche, though as you read further into it, there are also many paralells with the life of Christopher Robin Milne. Made in to a character in a popular childrens book series by his missing father, Tommy Taylor makes a living on the comic convention circuit. However, as the book progresses, it becomes clear that the stories written about Tommy may not be entirely ficticious. An entertaining and cleverly written book.

This first volume of Carey and Gross's work sets the scene for what could be a rival to 'Preacher', 'The Sandman' and 'Fables' (which it is closest in nature to).

Telling the story of Tommy Taylor - a man who has lived off of the royalties of his father's books - featuring Tommy himself as a wizard at school with two friends fighting a dark lord. Or so he believes. Within the first two issues, his life is turned upside down as revelations regarding his and his fathers past surface. His livelihood threatened, and after an accident that makes people believe he is the 'real' Tommy Taylor and general messiah, he goes in search of his past.

Urban fantasy and horror which, with each subsequent volume gets better and better, Carey's prose is as usual excellent and the artwork sets of the quirky nature of the tale.

Strongly recommended. I just hope that the publishers of the comic listen to the fans and keep it going unlike the also excellent 'Crossing Midnight'.

'The Unwritten' is a rare beast. Original, innovative and entertaining from start to finish. It is a work of art that left me dumbfounded almost from the word go.

Ostensibly, this is the tale of Tom Taylor, the son of a hugely successful author. Like Christopher Milne, Tom himself is the novels' central character. Tom is plagued by the fact his literary persona is a worldwide phenomenon. Worse still, Tom's father disappeared in mysterious circumstances, with the series left on one hell of a cliffhanger. When a young student questions Tom's birthright, his already complicated world, is turned upside-down

Yet, the contents of this book go far deeper than its intriguing premise. For 144 sumptuously illustrated pages, Carey and Gross deconstruct the nature of storytelling. They analyse the boundaries between fact, fiction, myth and legend, and tell their tale in blurred edges around them. Reminiscent of both Alan Moore's

This is one of the most ambitious Vertigo series ever.
Mike Carey's and Peter Gross's meta-fictional opus has no smaller theme than showing how everything's a story, how stories are everything, how they're the only thing worth dying for. Nobody who's ever taken a fictional book, a scientific text, anything written or told, even a little bit seriously could really argue the point, could they? As comics and TV writer Brian K Vaughan put it, it's a wish-I'd-though-of-it premise that's simply brilliantly executed.
Tom Taylor is the real-life mode of his father Wilson's literary creation, boy-wizard Tommy Taylor. As clues seem to appear that he may be the fake son, events transpire that turn him from wretched con-man to messiah overnight. Resolving once and for all to get rid of the massive shadow cast over him by his literary counterpart, Tom Taylor sets upon the journey to find out what his father was up to, and what his real story is, facing ruthless enemies he never knew he had, armed solely with the literary geography knowledge imparted upon him by his father.
Much to his chagrin - and to the reader's delight, it must be said - he reluctantly finds out that there may be, let's say... more fiction to the truth than he'd ever wished for!
Ignoring the Harry Potter and The Who references here is not a problem, as the authors do a better job than Mrs Rowling with the first, and pay a humble, respectful homage to the second. In perfect Unwritten fashion, there may even be a nod to the fact that there's no way somebody would have seriously come up with Harry Potter if they had no propaganda plan behind it...
And that's how much the book gets you, because the level of conspiracy theory here is appallingly high, complex and clever. It is woven into the fabric of the story, thus of the book and of the world. See? There's really no getting rid of the premise once you sink your teeth into it.
Kudos to Mike Carey for coming up with this brilliant and for displaying an encyclopedic and caring knowledge of literature.
And since this story is told in comic book form, more power to the veteran artist - and occasionally writer, as well as pretty much a co-writer on the book - that he's teamed with here, the great Peter Gross. The extras in this volume show how aptly he adapted Mike Carey's prose in re-creating the book inside the book, that is the Tommy Taylor novels, in comic book form. You do have the impression of reading the book and reading a comic in which the book is just a story device at the same time, receiving maximum pleasure from both. No small feat at all! And aside from that, he simply is a very good, minimalist artist, who doesn't need to be flashy or showy to deliver solid, powerful storytelling and art.
These opening issues set a very high bar for the rest of the series and really put a lot at stake. Anyway, I'll be along for the ride and I'll be proud and delighted in being a part of this story. Will you?