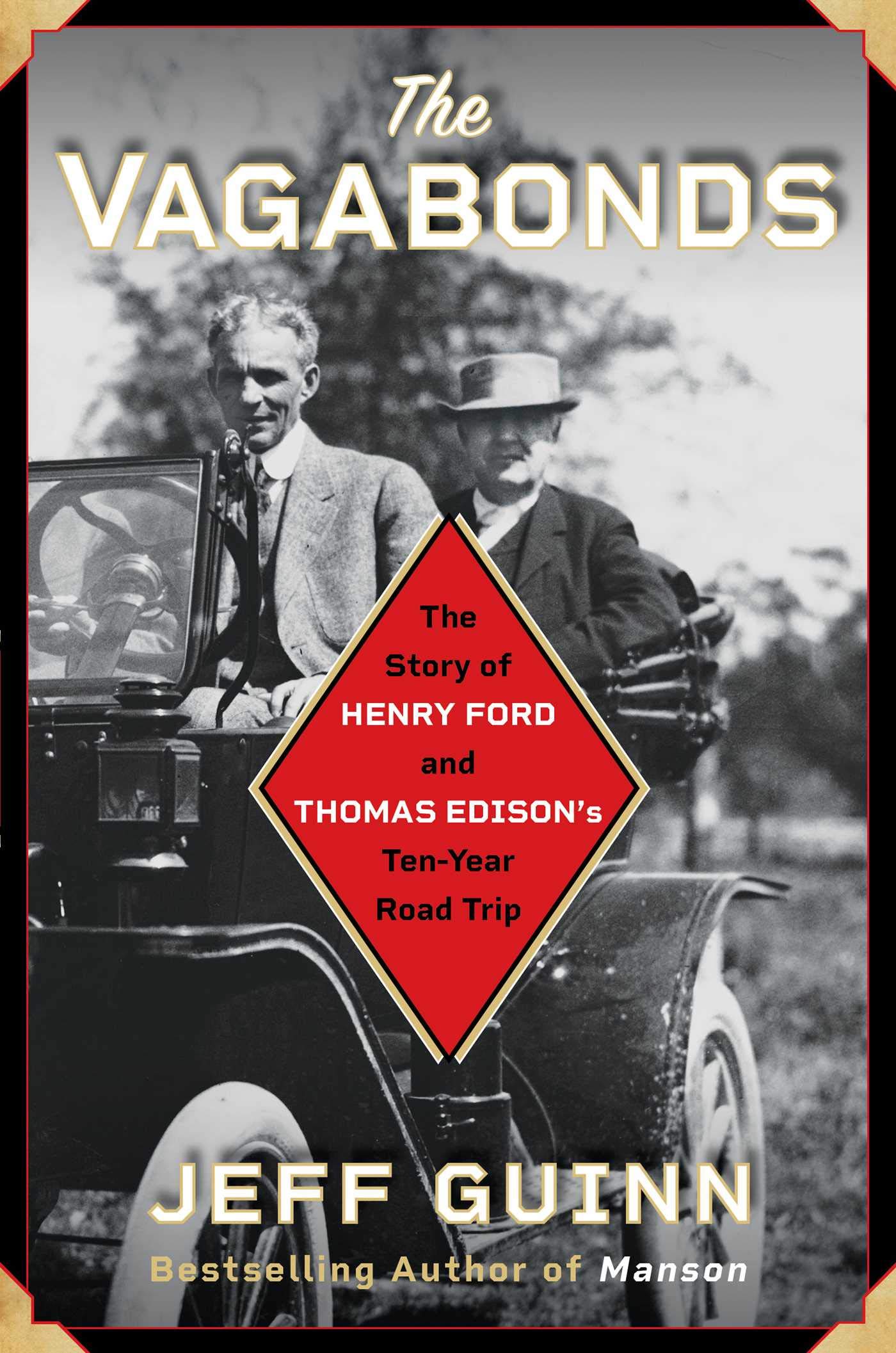 The Vagabonds: The Story of Henry Ford and Thomas Edison's Ten-Year Road Trip

The fascinating story of two American giants—Henry Ford and Thomas Edison—whose annual summer sojourns introduced the road trip to our culture and made the automobile an essential part of modern life, even as their own relationship altered dramatically.

In 1914 Henry Ford and naturalist John Burroughs visited Thomas Edison in Florida and toured the Everglades. The following year Ford, Edison, and tire maker Harvey Firestone joined together on a summer camping trip and decided to call themselves the Vagabonds. They would continue their summer road trips until 1925, when they announced that their fame made it too difficult for them to carry on.

Although the Vagabonds traveled with an entourage of chefs, butlers, and others, this elite fraternity also had a serious purpose: to examine the conditions of America’s roadways and improve the practicality of automobile travel. Cars were unreliable and the roads were even worse. But newspaper coverage of these trips was extensive, and as cars and roads improved, the summer trip by automobile soon became a desired element of American life.

In The Vagabonds Jeff Guinn shares the story of this pivotal moment in American history. But he also examines the important relationship between the older Edison and the younger Ford, who once worked for the famous inventor. The road trips made the automobile ubiquitous and magnified Ford’s reputation, even as Edison’s diminished. The automobile had come of age and it would transform the American landscape, the American economy, and the American way of life.

Guinn brings to life this seminal moment when a new industry created a watershed cultural shift and a famous businessman became a prominent political figure. The Vagabonds is a wonderful story of two American giants and the transformation of the country.
View on Amazon
I have long been a fan of the books of Jeff Guinn. The Texan has written excellent biographies of Charles Manson, Jim Jones of the Jonestown massacre, Bonnie and Clyde and participants n the Gun Fight at the OK Corral. His speciality is
Americana.
The Vagabonds deals with the close friendship of two giant geniuses of America. Henry Ford (1862-1947) was the quirky and opinionated creator of the Model T and the Ford Motor Company. Ford was anti-Semitic and lacked a college degree. What he did possess was a keen intelligence and business smarts Thomas Edison (1847-1931) was responsible for 1,093 U.S. Patents an all time record. He was a genius!. Henry Ford at one time worked for Edison and the Menlo Park inventor of such modern marvels as the phonograph and the incandescent light bulb was his hero. In 1914 Ford and Edison visited the Everglades close to the latter's Fort Meyer mansion,. Their wives were along for a miserable brief camping trip. Along with Harvey Firestone of the tire company they decided to go on one camping expedition every year With interlude time due to World War I (Ford visited Europe on his Peace Ship seeking to end the raging war) and health and business issue this practice continued until 1925. John Burroughs the crotchety naturalist accompanied the Vagabonds on several trips. Journeys were made from California to the Upper Peninsula of Michigan and upper New York State. The Vagabonds even lunched with Presidents Harding and Coolidge on two of their trips.
Along the way we learn about the development of America's love affair with the automobile and how highway travel developed from the production of the first Model T in 1908 to the explosion of modern American travel in the 1920s. Jeff Guinn writes in a folksy and fun style that make spending time in his company a delight! A fun and informative read for all! Highly recommended!

"The Vagabonds" makes for fun-filled reading. A traveller to Ft. Myers, Florida can visit the Ford-Edison houses and start to learn of the friendship between those two innovators. At the beginning of the automobile age, Henry Ford, Thomas Edison, and Harvey Firestone travelled together in auto convoys, visiting different places in the United States. In part, their camping trips were to publicize automobile travel....and sell Ford automobiles Firestone tires. As Ford and Edison were widely known in the United States, their trips were newsworthy and the caravans were followed by a hoard of newpaper reporters. Reading "The Vagabonds" is a wonderful way to learn about these highly successful movers of the American economy. A fun book to read.

What American DOESN'T know Thomas Edison? Even still, Henry Ford was the reason I picked this up (I'm a lifelong car nut). And Harvey Firestone was instrumental in a number of areas. Naturalist John Burroughs was the least known of them to me but he seemed to be one of the key features in those early trips. But what I didn't know was their long-standing connection to one another, their distinctive travels together or the many places where their influential visits are still demonstrating influence.
The book reads like a mini-biography on their individual lives and their mutual connections. The trips seem to serve as a meeting place and bully-pulpit for their enterprises and adventurous spirits. Their travels began as a means to meeting the last of those - adventurers who wanted to see places and experience life out of the ordinary. Their celebrity - after all, these were some of the most widely known and photographed men in the US when they were traveling together - was both a blessing and a bane. It meant it was hard to arrive anywhere incognito. And yet, as their trips continued, they each - in their own way - leveraged that for their own purposes, rightfully so. After all, if a media member is going to interrupt their vacation, the least they can do is help the Vagabond accomplish a larger goal.
Not every trip went according to plan. The early trip to the Florida Everglades for example was a disaster in every way. But for the most part, these trips served each of them as a respite and welcome repose from the push-pull of their working lives and - it seems - some of the happiest days they knew.
Overall, if you're a student of any of these men, this book is a worthy read. A fun, fast read, it's focus on the facts of the trips is a needed component but the impetus for me was understanding WHY they took these trips in the first place was the best component.

4 stars for this enjoyable and well researched book about the summer outings Thomas Edison and Henry Ford enjoyed a hundred odd years ago. There were plenty of witty asides to compliment the interesting historical look at the era. I’d highly recommend this book to anyone interested in US history and/or the nature of celebrity.

Btw, kudos to the printer for such a sturdy book. My copy got soaking wet a few weeks ago when a rogue wave drenched me on my beach chair. My iPhone got destroyed but not my book. After I let it sit and dry off for a while it was still, to my surprise, rather readable.

Well written story of the interactions among Ford, Edison, Firestone and others as they travel together in order to generate publicity and sell products--the "American Dream." We see how automobiles made a big difference in the life of the "common man." As a lover of auto travels (having visited 49 states and 7 provinces of Canada by auto), I can appreciate the lure of the road. We also see some not so admirable traits of the participants in these trips and get a good idea of the times in which they lived.

I had no idea how close these men were and how much they changed America beyond what we traditionally know about them. This book got into their personalities which was a new aspect that I’ve never read about

A good read but a little long and drawn out. I learned a lot. This was fascinating. I’m sure my great grandparents read of the trio’s journeys with envy. This book will make you want to take a road trip in style.

Fascinating book. I ordered it because my Grandfather met Ford and Edison on one of their tours in 1919.