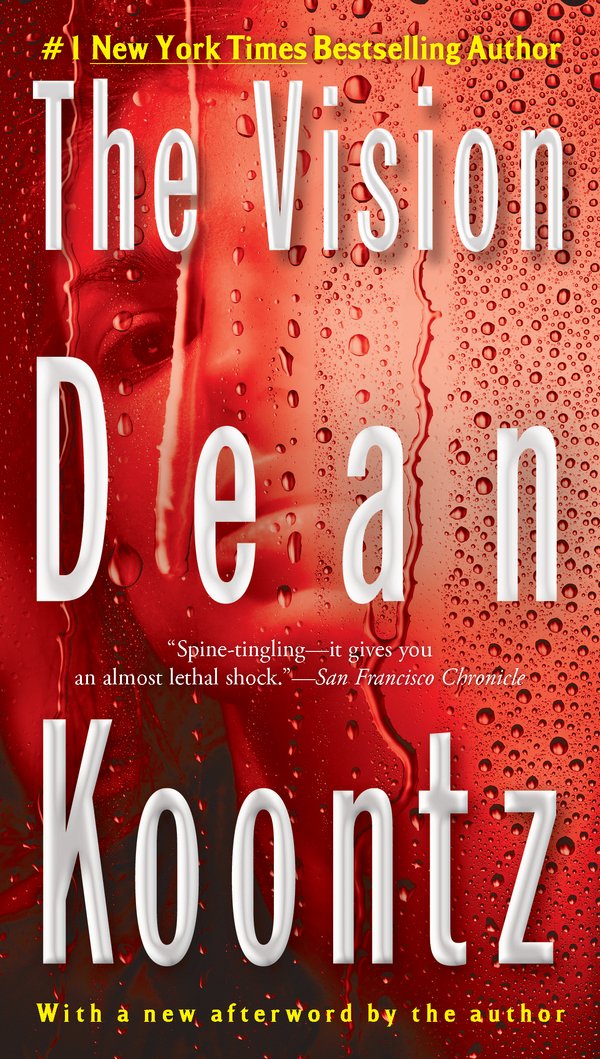 In this terrifying novel, #1 New York Times bestselling author Dean Koontz reveals the darkness in a woman's mind—and the killer lurking there...

Mary Bergen aids the police in solving crimes, those that have happened and those that are about to. Now this gifted clairvoyant is using her psychic gift to help track a serial killer. But something terrible from Mary's past has been invading her dreams and she is haunted by the sound of leathery wings. The killer knows secrets even she has locked away. Knows about the torture she was administered at the hands of a psycho when she was a little girl. And he is coming for her next.
View on Amazon
I finished The Vision about two weeks ago. Work keeps me quite busy. Here I am now, giving you my review for a decent book. Stick around and see what I think.

The Ugly: There are two instances in the book, just two but enough to drown out the book, where Mr. Koontz made one paragraph a complete sentence. All he did was kept saying “and” over and over again. It was like a complete rookie mistake. I don’t think he could have made that as a conscious effort. It was two run-on sentences that lasted almost an entire page.

The Bad: Even though there is an epic twist in the book, it was one you could see coming from miles away. There were way too many red herrings in the book to count. You could see them the second you read them. The only reason I’m not putting this as “the ugly” is because of the nice twist.

The Good: The story is best part here except for the obviousness of who the killer is. I’m not trying to give too much away because of the surprise, but just know, out of the works he has written up to this point this is the best story. Hopefully the writing gets better.

Final Thoughts: I was going to give this a 4-star rating, but those two sentences that ran for most of a page took away from the book. They aren’t until towards the end of the book, but enough to hurt the book. I would say read it.

I don't know why the negative reviews knocked Dean Koontz's "usual formula". I have a suggestion...if you don't like it find another author! This one was full of surprises and plot turns that I did not see coming at all. Fast paced, great character development, and a great plot. His characters grow on you!

Synopsis:
Mary Bergen is a psychic that uses her abilities to help the police. With a serial killer on the loose, Mary begins having terrifying visions of murder victims who seem strangely familiar. She knows the answers lie buried in her past, rooted in the torture she endured at the tender age of 6. With her new husband, Max and her ever-faithful brother, Alan by her side, Mary must find answers fast before she ends up being the killer's next victim. Further complicating the situation, Alan and Max hate each other. Each is distrustful of the other and both are possessive of Mary's time and attention.

Review:
You can definitely tell this is one of Koontz' earlier works as it's a bit predictable, even bordering on trite at times. Even so, I thoroughly enjoyed the book. It's short for a Koontz novel and fast paced which makes for an easy read. I was pretty sure I knew "whodunit" within the first 100 pages but the "why" was much harder to figure out. Overall, I'd say there are enough twists and turns in this book to keep most readers satisfied.

I am a sucker for a murder mystery, but it has to be well written and this one is, as far as I am concerned...I don't want to give anything away, so I'll be careful what I say; this way, if you read it, you can go through what I did! I always try to guess who the culprit is, unless they outright tell me, so I was going crazy since I didn't know who it was! I work at home and had to fight the urge to ignore my job so that I could read and read...it prolonged the enjoyment over all, kind of like foreplay!!
I really liked the book, most definitely...love Dean Koontz!!

Hated the graphic sex n it. I just don’t need or appreciate that n a book. If the rest of the book hadn’t been so good I woulda 1 stared it. I’d rate this one R for the sex and a little filthy language.

This novel is not up to the standard of mature Koontz work. It was unnecessarily gross at one point and I was able to discern the identity of the villain way too early in the book. Wish I'd chosen something a bit later in his career to read. This is not representative of his work.

This was an odd story . I'm not quite sure how I felt about it . It does keep you guessing as to who is the " bad guy " though . After I finished it I realized that I wasn't fond of the players in the story . Then I read what Mr. Koontz had written at the back of the book . He had written this as a very young man . So you be the judge

As a general rule a writer's earlier works are never near the quality of those that come later. This book, compared to the magnificent "Innocence", is unfair to a novice writer. The insight and knowledge of the human condition mixed with the supernatural is a trademark of the later Dean Koontz volumes. "The Vision" was a fast read and I enjoyed it. I knew what I was getting when I ordered it and it was good enough. For pure pulp fiction excellence John D. McDonald cannot be beaten and this earlier work by Koontz is no where near that standard. In his later works came the greatness.

First of all, how fantastic to see so many of Koontz's early novels on Kindle for 99p - I I wish they would do that with more well know authors. It's so long since I read some of his early stuff that I've more or less forgotten it. I vaguely remember reading this when I was a teenager and I found it quite suspenseful and scarey then. Revisited I can see how clunky some of the plot elements are - in particular the heavy handed way he tries to force the reader's suspicions in the direction of one character and I also found the climax a bit rushed and disappointing. Having said that it's a million miles better than many of his recent books which are not remotely scarey and filled with pointless descriptive paragraphs and lots of stuff about dogs- (though even back in 77 when he wrote this, there is a forerunner of things to come when hespends a couple of paragraph describing shelves full of glass dogs :)

Overall it's not bad at all for 99p and I will probably download 'Phantoms' next. I remember that as being pretty good.

In a surprise departure from many of his novels, Mr Koontz did not suddenly switch to his villain's viewpoint halfway into the story. We only find out who the killer was in the last couple of chapters of the book. Well, I figured it out in the first few chapters, despite all the red herrings, but perhaps because I was expecting a twist. A double bluff would have been good.

Perhaps my main problem was with the annoying heroine. Stop whinging and get on with it!

This was a really good read and difficult to put down. A brilliant twist in the plot close to the end. Having a great interest in psychic phenomena I found it well written and very interesting. Another great Dean Koontz book. He has become my favourite author and I a slowly working my way through all his books. Well worth reading.