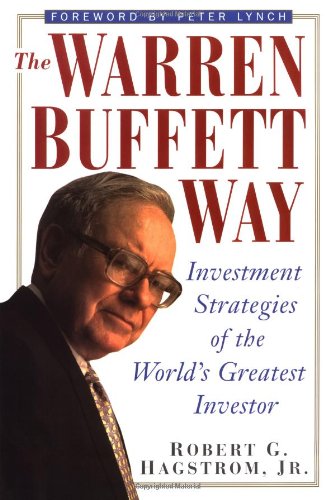 "Simply the most important new stock book of the 1990s, to date. Buy it and read it." -Kenneth L. Fisher Forbes

The runaway bestseller-updated with new material included for the first time!

"The Warren Buffett Way outlines his career and presents examples of how his investment techniques and methods evolved and the important individuals in that process. It also details the key investment decisions that produced his unmatched record of performance." -from the Foreword by Peter S. Lynch Bestselling author, One Up on Wall Street and Beating the Street

". . . an extraordinarily useful account of the methods of an investor held by many to be the world's greatest." -The Wall Street Journal

"Robert Hagstrom presents an in-depth examination of Warren Buffett's strategies, and the 'how and why' behind his selection of each of the major securities that have contributed to his remarkable record of success. His 'homespun' wisdom and philosophy are also part of this comprehensive, interesting, and readable book." -John C. Bogle Chairman, The Vanguard Group

"It's first rate. Buffett gets a lot of attention for what he preaches, but nobody has described what he practices better than Hagstrom. Here is the lowdown on every major stock he ever bought and why he bought it. Fascinating. You could even try this at home." -John Rothchild Financial columnist Time magazine
View on Amazon
"The Warren Buffett Way" is an exploration of Warren Buffett's investment philosophy and process of picking stocks. By combing through Buffett's trades and his annual letters to Berkshire Hathaway shareholders, author Robert Hagstrom explains Buffett's process to the reader. The book focuses on Buffett's relatively concentrated portfolio at the time, as well as the wholly owned subsidiaries of Berkshire Hathaway, such as See's Candies, Nebraska Furniture Mart and GEICO Insurance. Each holding is analyzed, from fundamental operations of the business to the price and multiple Buffett paid.

Throughout the analyses of each holding, Hagstrom extrapolates common themes that reoccur in Buffett's stock-picking; namely, investing in businesses with strong competitive advantages in their industries, as evidenced by high returns on equity and generous free cash flow. Of course, Buffett's performance is not due simply to investing in great companies, but investing when multiples are lower than average, which the author takes care to point out. Hagstrom also intersperses Buffett's own words, gleaned from the annual letters and other published sources, to demonstrate the rationale involved in his investments. Buffett is not dogmatic,however, and Hagstrom notes that many investments, such as in General Dynamics and Freddie Mac, were not made with a long term holding in mind, but rather presented themselves as unique opportunities given the circumstances of their purchases.

More than twenty years later, Warren Buffett has grown in fortune and in public-visibility. Among investors, the tenets described in "The Warren Buffett Way" are so well known, it may be forgotten that they were first comprehensively covered in Mr. Hagstrom's book. Indeed, the mountain of literature on the Buffett-style of "value" investing can trace its origin to this very book. The Appendices are a wealth of information as well. For the reader who desires a concise exposition of Buffett's investment process written during the heyday of his common stock-picking, this book should be at the top of the list.

There really isn't much content in the book. I suspect the author had other interests, such as his management of a mutual fund that claims to be inspired by Buffet.
First it goes into a little historical background on Buffet and his companies. Then one reasonably good chapter that summarizes his investment strategies. The final chapter repeats this all over again; a waste of print and paper.
In the middle there are several chapters that describe his company's permenant holdings, long term holdings, and other holdings. These sections are extremly tedious and boring, and add very little value to the reader.
Birkshire is very honest and strait shooting in its annual reports. Many readers would be better off reading to a copy of that, before picking up this book. And the annual report is free.

This was a solid video on the Buffett way. I have read, listed or watch everything on Mr. Buffett's investing philosophy. I have also read the books of his influencers as well. I thought that the Warren Buffett Way was a step by step guide. It was not but that did not diminish the knowledge that can be taken from the video. I recommend it.

A good book for learning "The Warren Buffett Way". I have picked up a few things that I can use in my own investing but one thing the book makes clear is that Mr. Buffett's experience and connections make it highly improbable that an average Joe can duplicate his feats. Never-the-less there are a few lessons that I learned such as(1) invest in the company not the market;(2) it is better to own a few well performing stocks than several average performing stocks; (3) look very carefully at who manages the company and make sure he places the shareholders in a high priority;(4) it's all right to go against the grain if your experience instincts and knowledge lead you that way, ,i.e. don't be a lemming.

This is the first edition of the Book which was based on 80's and 90's action of Mr. Buffett. I plan on also reading the 2nd and 3rd editions to understand his investments through the 21st century.

This item has very few pages without annotation or underlining in multiple colours. Had this been disclosed in the description i would not have bought it.

Gives the basics and more, I like how this packaged didn't have the book cover bent