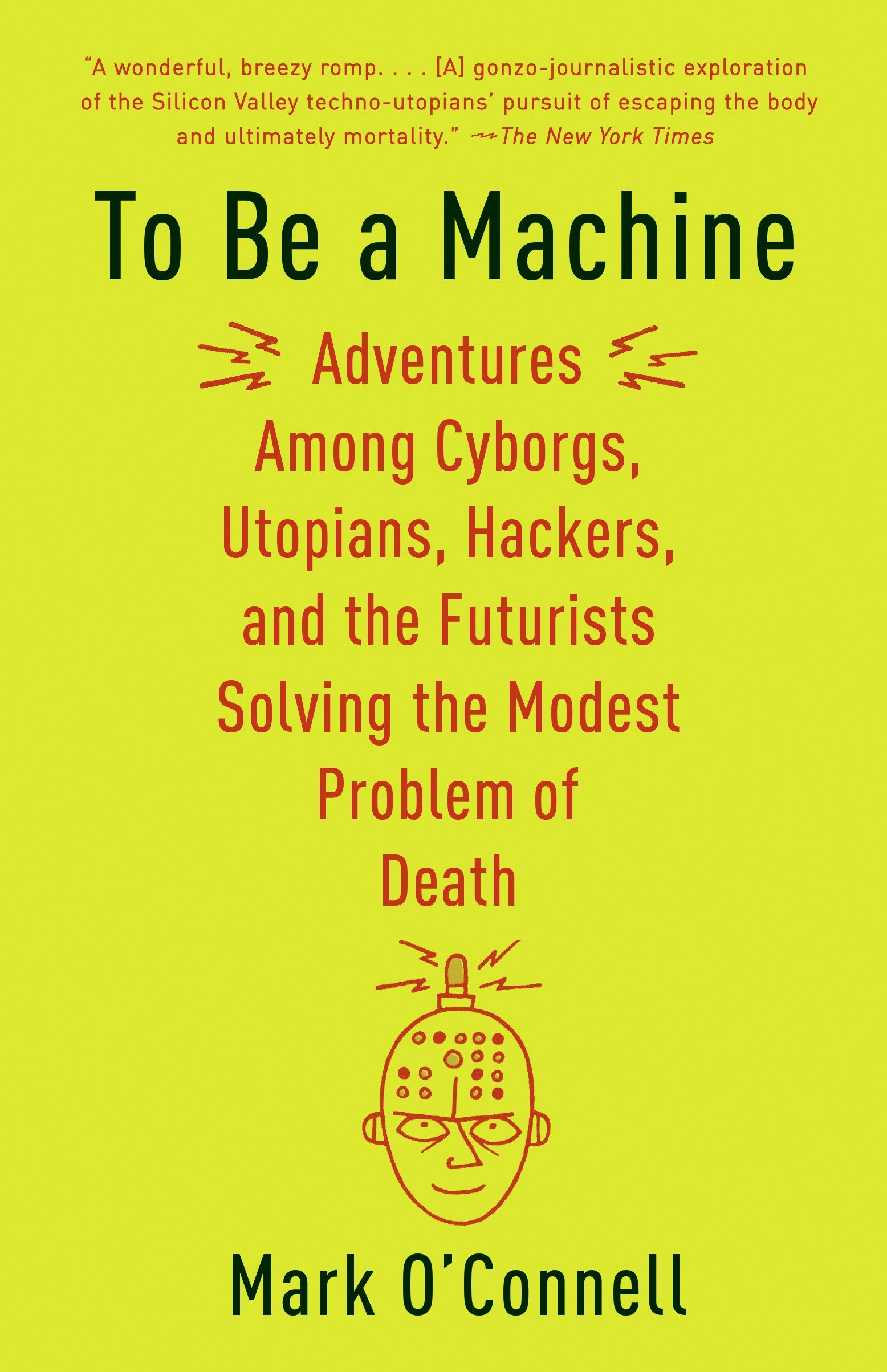 To Be a Machine: Adventures Among Cyborgs, Utopians, Hackers, and the Futurists Solving the Modest Problem of Death

Transhumanism is a movement pushing the limits of our bodies—our capabilities, intelligence, and lifespans—in the hopes that, through technology, we can become something better than ourselves. It has found support among Silicon Valley billionaires and some of the world’s biggest businesses.

In To Be a Machine, journalist Mark O'Connell explores the staggering possibilities and moral quandaries that present themselves when you of think of your body as a device. He visits the world's foremost cryonics facility to witness how some have chosen to forestall death.  He discovers an underground collective of biohackers, implanting electronics under their skin to enhance their senses. He meets a team of scientists urgently investigating how to protect mankind from artificial superintelligence.

Where is our obsession with technology leading us? What does the rise of AI mean not just for our offices and homes, but for our humanity? Could the technologies we create to help us eventually bring us to harm?  Addressing these questions, O'Connell presents a profound, provocative, often laugh-out-loud-funny look at an influential movement. In investigating what it means to be a machine, he offers a surprising meditation on what it means to be human.
View on Amazon
This was a very interesting read. There are almost certainly more complete technical summaries of the various efforts at extending human life. They are probably stale two months after publishing. This book really highlighted and explored the human side of these issues in a very personal way. That gives it a good deal more shelf life.

The idea for this book is a good one. There is a lot that can be said for how current and future technologies may develop towards the singularity.

The basic idea for this book is therefore sound, but unfortunately the content seems somewhat superficial. The author is good at introducing some of the key people involved in these activities, but he fails to really engage with the technologies beyond very cursory explanations. This is the main disappointment I have with the book.

For instance, when talking about the efforts towards human regeneration following cyropreservation he highlights how a review in MIT Technology Review dismissed such claims as nonsense. Thankfully I'm a subscriber to that magazine so could check this discussion myself, but the author doesn't explain at all what such issues are and how they could be overcome or what conceivable activities could be pursued to address them. In other places of the book there is a similar lack of a sufficient explanation of the kinds of technology at play, for instance with regard to efforts towards brain computer interaction.

The first half or so of the book is dealing with quite mainstream advocates of the cause - that is, people based in universities and research centers, or who have amassed significant amounts of money and are supporting work in the area. It is useful to pick out some of the names he mentions as a basis for further research and to read their papers. The second half of the book introduces some of the hobbyists, which for me is a bit disturbing in what they are trying to do. I am not interested in religion so skipped that part.

Overall, it's a book that addresses an interesting topic but it does in a way that for me is a bit disappointing.

Extremely well written - a delight to read. The author is not an advocate but an observer and he does a thorough and fair review of the subject, transhumanism. This book is a great introduction and/or update of the field.

This was a well-written examination of Transhumanism as presented by its proponents and considered by Mr. O'Connell (no relation to me, as far as I know). It was a funny, but occasionally somber ride and it clarified a lot of my own concerns about the movement.

Really interesting and well-written exploration of transhumanism. Perfect for lay people and readers looking to understand more about the field.

This was a fascinating read recommended by an NPR book review, read through it twice & passed on for another to enjoy :)

A great read. Tender and terrifying at the same time.

Witty, terrifying,and funny - O'Connell discusses the ultimate goal of man: to triumph over death itself. This is an important introductory book to Transhumanism - one everyone should read.

Really entertaining look at the emerging world of biohacking. O'Connell's personal voice reminded me a lot of Jon Ronson's - spending time with his subjects and allowing them to explain themselves - with some summary and humourous 'thoughts of the author' peppering the process all along the way. You feel like you're on the journey with him and question a lot about your own views on the science of immortality and how much we should tinker with what makes us humans. Some of it's weird, some of it's bonkers, some of inspiring and some is plain sinister. Shame the book doesn't broach more about cultural issues as Yuval Harrari's Homo Deus does - but this is essential reading.

I raced through this, found it thought-provoking, O’Connell’s distinctive voice makes this an entertaining and at times incredibly funny read. I picked it up after reading Cargill's SF novel 'Sea of Rust' which, despite flaws, raised a number of questions about what it means to be human and the potential relationship between human and machine/AI. These questions permeate O’Connell’s work. He’s a journalist with a background in literature, rather than science or technology, so charts his terrain from an outsider’s perspective. Here he journeys through various manifestations of the transhumanism movement, which is based ‘on the conviction that we can and should use technology to control the future evolution of our species.’ As O’Connell points out it’s a peculiarly nostalgic movement. It sidesteps the reality of environmental disaster in progress and produces visions of the future that seem to hark back to science fiction fantasy worlds of the past (like O’Connell it should be fairly obvious I’m not a transhumanist sympathizer). He moves from the entrepreneurs of Silicon Valley working on models of ‘radical life extension’ to the cryogenics movement waiting to freeze their severed heads ready for upload to the AI robots to come to those predicting the singularity and doom to come. Fascinating, enjoyable and informative, great book.

This is a potentially fascinating and important subject. But after a strong introduction this book becomes a rambling travelog with too much unnecessary background scene setting and too little incisive commentary and analysis.

The book started off well but then lost a lot of its energy and became repetitive. Needed a stronger editor and some better content

With each chapter introducing us not only to different expressions of transhumanist exploration, but also the larger than death characters that exemplify them, Mark O’Connell’s writing will inform, entertain and challenge the scientist, philosopher and voyeur in you.

A fascinating survey of some of the more extreme theorists of the future of mankind, told with wry wit but with occasional disturbing messages on the value, or lack of it, that some of of silicon valley's thinkers have for humanity.

A super read, but I have always been interested in this subject and this read lived up to all my expectations.

Bought as a gift and it was greatly appreciated. Appeared to be very quality

A fascinating insight into a group of society, that have radically different views of life and death, compared to mainstream society.

Brilliant, scary and a must read

Very engrossing, witty and clever exploration of the near to mid term future. Well worth a read.

A very personal and human perspective on a topic which is usually described in very futurist and technological way. Excellently written.