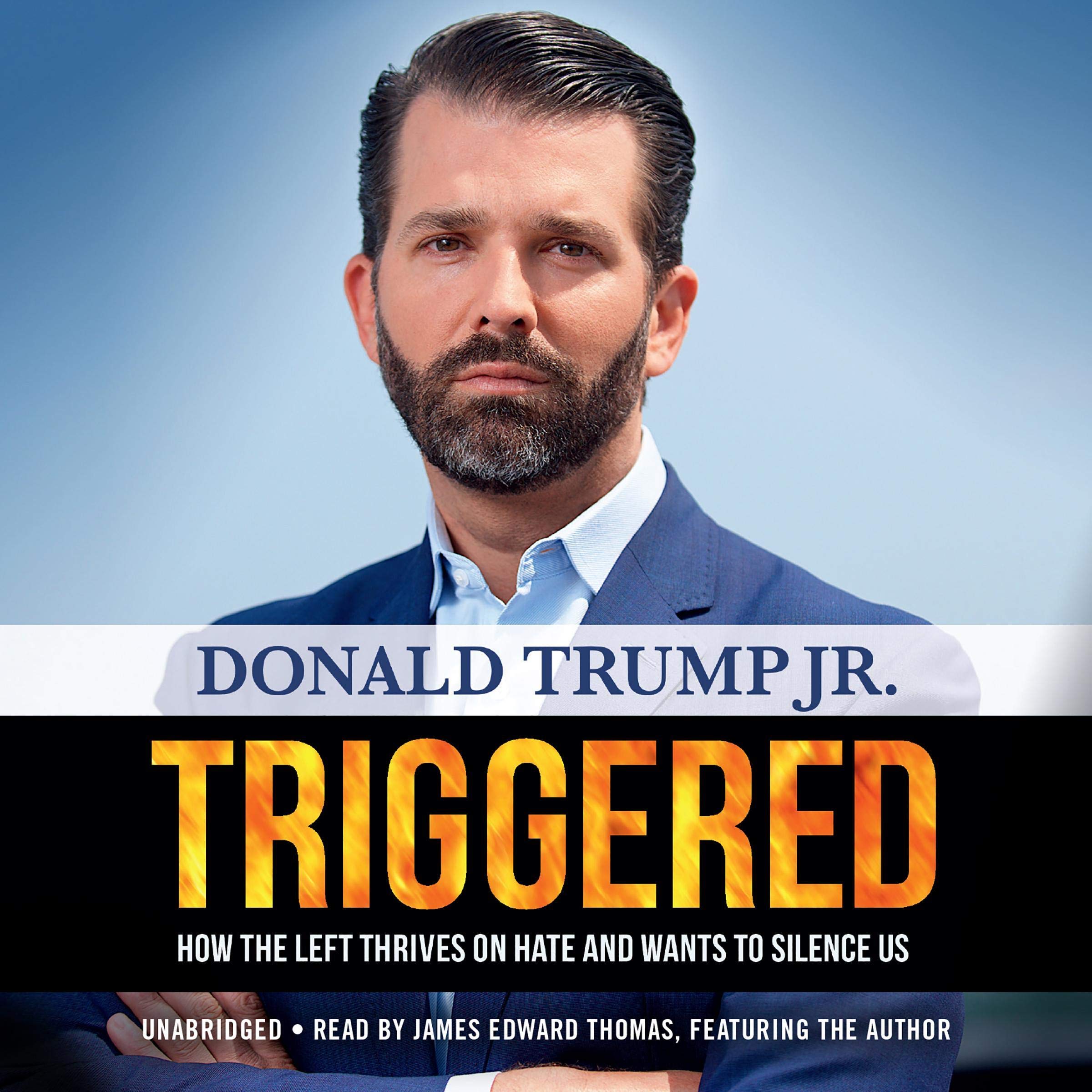 Triggered: How the Left Thrives on Hate and Wants to Silence Us

In Triggered, Donald Trump, Jr., will expose all the tricks that the left uses to smear conservatives and push them out of the public square, from online "shadow banning" to fake accusations of "hate speech." No topic is spared from political correctness. This is the book that the leftist elites don't want you to listen to!

Trump, Jr., writes about the importance of fighting back and standing up for what you believe in. From his childhood summers in Communist Czechoslovakia that began his political thought process, to working on construction sites with his father, to the major achievements of President Trump's administration, Donald Trump, Jr., spares no details and delivers a book that focuses on success and perseverance, and proves offense is the best defense.

View on Amazon
Whether you agree politically with the content of this book or not, it is impossible to look past the fact that it is very poorly written. It reads more like a rushed draft than a finished work, and it would have benefited from the input of an editor at any time during its production. I will give it two stars instead of one as it does appear to be an honest attempt at writing by the author, but the author needs to understand in future attempts that even a mediocre book needs more effort and consideration than simply putting a lot of words in order.

Something I think about often is that just because I personally agree with something doesn't mean that I need to endorse or accept bad arguments in support of it. It is possible to strongly believe in right wing politics - even to actively detest left wing politics - and recognize that there is little value to this book. Its main arguments are superficial at their deepest, the content is not very well developed, and the sum of its parts is a hastily produced autobiography much more than it is a respectable analysis of the current political climate. By the time a reader gets to the end of this book, they will have much more of an idea of who the author believes he is - and how the author feels about his father - than they will have any sort of new insight on its purported subjects.

Should the author write any more books, my suggestion would be to put more effort into their production and the depth of their content. This book as it stands attempts to rely on witty insults and attempts at humor to bridge the content together, but that content has no depth, provides no new or fresh insight, and is not presented in an organized manner. If readers want superficial content used as a vehicle to move cheap insults, they can get content of that quality for free just by reading the comments on any news article posted to Facebook. There is no real value gained by paying money to get that same caliber content out of this book.

This book did not really bother me for all of the delusions until I came to this section written by a man descended from a long line of draft dodgers and cowards: "I rarely get emotional, if ever, yet, as we drove past the rows of white grave markers, in the gravity of the moment, I had a deep sense of the importance of the presidency and a love of our country.” This was about Arlington.

“In that moment, I also thought of all the attacks we’d already suffered as a family, and about all the sacrifices we’d have to make to help my father succeed — voluntarily giving up a huge chunk of our business and all international deals to avoid the appearance that we were ‘profiting off the office,’” Jr wrote.

This is not about truth or lies. It has crossed to mental illness.

THIS IS THE GREATEST BOOK EVER WRITTEN, ALSO THE LONGEST, BY THE BEST SON IN THE WORLD, AND BY THE BEST I MEAN HE IS THE SMARTEST, EASILY THE SMARTEST SON THERE HAS EVER BEEN, AND THE BEST LOOKING AND THE BEST WRITER, WE HIRED THE BEST WRITER, I MEAN HE IS THE SMARTEST GOOD LOOKING BEST WRITER, WELL, YOU KNOW, EXCEPT FOR HIS FATHER, OBVIOUSLY HIS FATHER IS SMARTER, AND HAS REALLY BIG HANDS, AND WE'VE BEEN GROOMING HIM BECAUSE OF COURSE THE DYNASTY MUST GO ON BECAUSE THERE WOULDN'T BE MUCH POINT IN HAVING A DYNASTY, OR A NAME REALLY, IF IT DIDN'T GO ON, BUT GROOMING NOT IN THE WAY YOU WOULD THINK – HAVE YOU SEEN THAT BEARD OF HIS, WE MAKE SURE THAT STAYS REALLY CLOSELY CROPPED, IT'S ELEGANT ISN'T IT? THAT BEARD? ANYWAY, WHERE WAS I? OH RIGHT BUY THIS BOOK IT'S THE BEST.

Such an amazing book, very insightful and so true.

enjoying the humorous writing style of DJT Jr. He holds nothing back, sharing stories from his earliest years that include a summer long visit to Czechoslovakia with his hard working grandparents, working heavy equipment in the Trump construction company, and being cut absolutely no slack while he learned the business.

All of this prepared him for and gave credence to his recounting of the time on the campaign trail, election night and the fiasco that has ensued for the last 3 years. You will find this info and more in “Triggered”. Trump Jr. provides some code crackers for buzz words that permeate the media today. As a more senior member of the electorate, I really appreciated that! Additionally, there’s a chapter on the social media that’s just enlightening; so glad I don’t partake!

Is this book a fine piece of literature? Nope. It wasn’t meant to be. It’s a heartfelt accounting of events from a son who loves his father. It’s the truth, as he experienced it and much of what is said in this volume has been reported across many channels and pages, e and otherwise. There are some decent pictures, if that interests you, but mostly there is an accounting of events, (albeit with an edge that might upset some), from a son who has temporarily given up his own path
to support his father, who just happens to be POTUS📚

I was worried about the future because after trump I see no hope. But his son is impressing me more more each day. And this book is awesome. Information from behind the scenes that never knew.

Great book and well written. The Left and the corrupt mainstream media enablers can tamper with truth, manipulate truth, and pervert the truth, but truth can never be destroyed. When truth fights back it reigns supreme and has the power to awaken those caught in the web of lies and manipulation. This book has that power and is a gift to society, to history, and will serve posterity. The Left's dilemma is the principle of diminishing returns because once one is awake, they can never be put back to sleep, and the more extreme the Left becomes as a result, the more awake people become. I for one am happy to be, right now, on the right side of history and on the right side of truth.

As a Canadian deplorable I Love this book! Very refreshing after all the fake news that is out there, definitely recommend it to any one who's wanting to know the truth!

Don Jr. has written a book about things that are actually happening....not fake news! Really well written. Highly recommend buying this book if you're looking for facts.

Pleasure to read - hard to put down.
Sadly, no mention of the dark forces behind the useful idiots (i.e. behind the left).

Why 5 *****? Real life well written.
Important info on the Evil Left.
Clearly shows that DJT serves America and Americans....not his ego or 👛 purse.

Great book. I just got right into it and couldn’t put it down. Very personal and he tells it like it is.

My 82 year old mother stole my copy immediately and plowed through this book in 4 days. She didnt know much about america and who the Trumps are. She is impressed and now we can laugh at triggered "liberals" together.

Very informative and interesting read. This obviously comes from a very bias writer but he has a lot to offer. You will love the read and will get a lot of inside insights out of it!

Great book that goes into detail about how the propaganda news stations have constantly delivered news without fact checking, and all the other lies that have been told about President Trump.

Based on the review count I think it shows just how much Canadians love and wish we had a trump....

The book took what seemed forever to arrive and it still came a few days after expected arrival date (I ordered the book in late Dec 2019 and received it Jan 21, 2020)

The book is well written, easy read, with a descent sized font for reading (not too big not too small). I would recommend this book to someone that is more into politics than rom-coms.