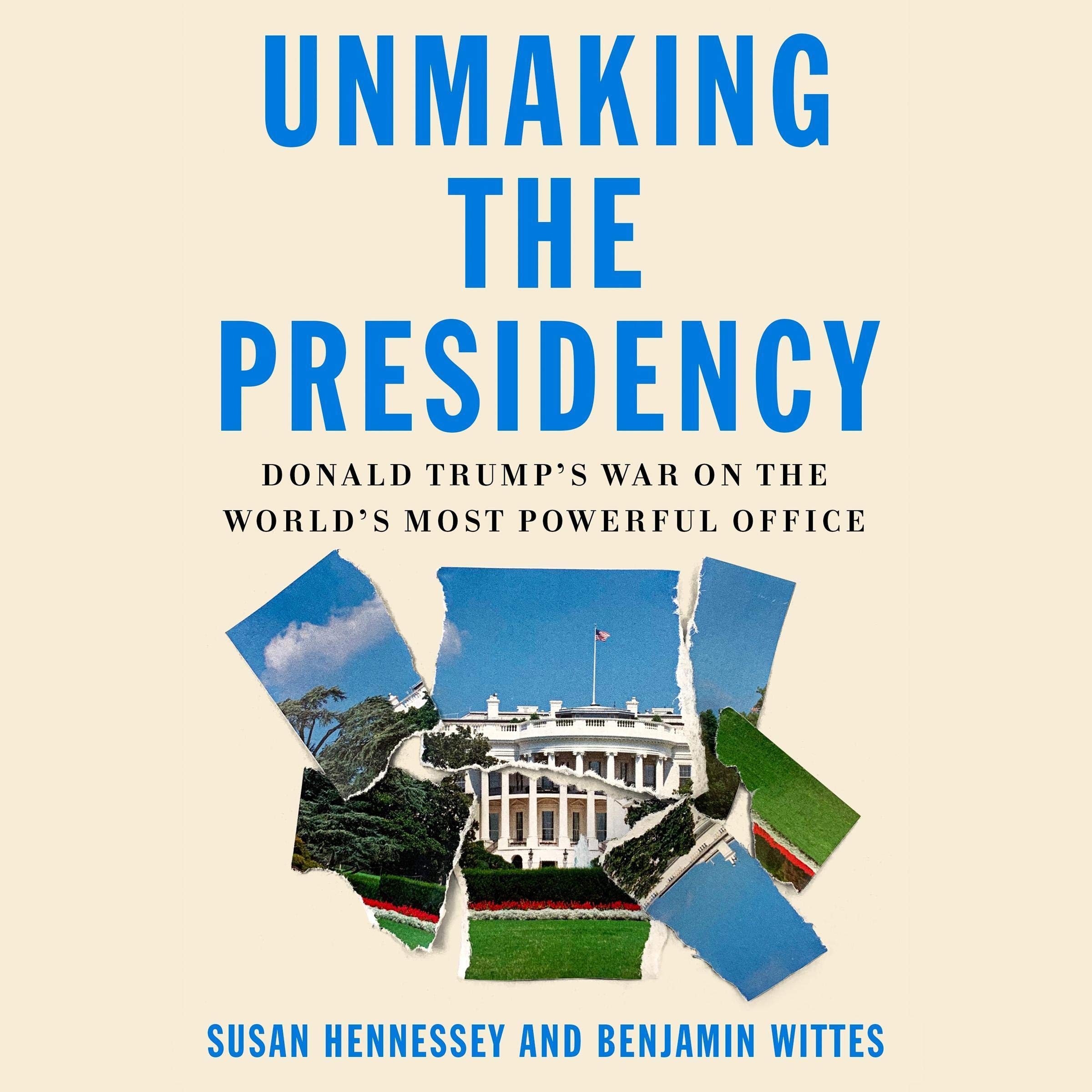 Unmaking the Presidency: Donald Trump's War on the World's Most Powerful Office

This program is read by the authors.

The definitive account of how Donald Trump has wielded the powers of the American presidency.

The extraordinary authority of the US presidency has no parallel in the democratic world. Today, that authority resides in the hands of one man, Donald J. Trump. But rarely if ever has the nature of a president clashed more profoundly with the nature of the office. Unmaking the Presidency tells the story of the confrontation between a person and the institution he almost wholly embodies.

From the moment of his inauguration, Trump has challenged our deepest expectations of the presidency. But what are those expectations, where did they come from, and how great is the damage? As editors of the "invaluable" (The New York Times) Lawfare website, Susan Hennessey and Benjamin Wittes have attracted a large audience to their hard-hitting and highly informed commentary on the controversies surrounding the Trump administration. In this audiobook, they situate Trump-era scandals and outrages in the deeper context of the presidency itself. How should we understand the oath of office when it is taken by a man who may not know what it means to preserve, protect, and defend something other than himself? What aspects of Trump are radically different from past presidents and what aspects have historical antecedents? When has he simply built on his predecessors’ misdeeds, and when has he invented categories of misrule entirely his own?

By setting Trump in the light of history, Hennessey and Wittes provide a crucial and durable account of a presidency like no other.

View on Amazon
I loved the book and found Ms. Hennessey and Mr. Wittes' insights on both Trump and the history of the Presidency to be fascinating. I had no idea that many of the norms that Trump has intentionally obliterated were neither statutory nor constitutional, but simply accepted practice. That is surely something Congress should fix if and when this country returns to normalcy and stability. One of the reviews commented that the book was full of "smears and insinuations." I think that could not be farther from the truth. The book is chock full of facts, citations, and history, and the only thing that I found to be a smear was that review obviously written by a Trump apologist who probably didn't read the book. In any event, if you want real insight and perspective on what Trump is doing in a historical perspective, this is a great read.

There are merits to books like "A Very Stable Genius," "Fear" and the like - they tell us what President Trump is really saying and doing behind closed doors. But they mainly amplify what we already know, so they can come across a bit - for lack of a better word - gossipy.

"Unmaking the Presidency," in contrast, is exactly the kind of Trump book we need. The authors don't just roll their eyes and facepalm at everything Trump has said and done. Instead, they put him in historical context and examine how he is changing the very nature of the U.S. presidency itself.

And despite the concerns of those who might judge a book by its cover, and dismiss this as a liberal anti-Trump screed, it's actually remarkably balanced in its approach. If you accept some basic truths about Trump - that he is far from the most ethical, eloquent, intellectual or truthful president we've ever had (which only the most ardent and delusional Trump supporters would dispute) - the book largely lets you reach your own conclusions about whether Trump's approach is for the worse or the better. He is violating the norms and customs of the office left and right, but then that's precisely what his supporters voted him into office to do.

There are times the narrative becomes a bit abstract and professorial, but stick with it. It's also distracting when, in an apparent nod to gender neutrality, the authors alternately refer to a generic president as "he" and then "she," sometimes switching back and forth within the same paragraph. It's awkward and unwieldy and distracts from whatever point they're trying to make - can't we cross that bridge when we come to it, and refer to the president as "he" until a future female president makes that pronoun change necessary?

But that's a relatively small quibble about what is an important and thought-provoking book. This is not titillating, headline-grabbing, fly-on-the-wall gossip about the things Trump has said and done as president. Instead, it will make you think about whether Trump represents a turning point for the presidency, or an aberration whose approach will be course-corrected by his eventual successor. No matter what your political affiliation and your opinions about Trump, you should read this book with an open mind if you care about politics, the presidency, the past and the future of our country itself.

What struck me as the strength of this book is that the authors aimed to accurately assess what Donald Trump is really doing rather than what his worst critics and his greatest fans want to believe he is doing. The authors are not axe grinders. They carefully and accurately assess the President in action and dissect the intent, effectiveness, and the frequent deception and persistent attention to personal gain rather than informed, competent governing, or even a pretense of concern with honoring his oath of office by executing his duties honestly. They do their work excellently and manage the complex material ably and with grace, informing readers so they will more competently appraise the President's actions and inaction for themselves. My Special Forces instructors emphasized that attention to detail could save your life. It also can get you closer to truth, and this book works to that end.

Hennessy and Wittes are not only insanely smart, analytic, and thoughtful but also thorough and well-researched. Excellent insight into Trump’s presidency and the broader historical context it finds itself within. Highly recommended

Like the Fifth Risk, it evaluates Trump on the position he holds and not simply on his character flaws. The bullying the narcissism and his loose relationship with the truth are all secondary to how his presidency is affecting that institution.

Clear, simple, informative and beautifully written. You will come away from reading this book with a greater understanding of how and why the Republic works the way it does. The conventions which are being eroded may be a permanent and radical change or the push back starting with Biden might be returning the stretched elastic of the body politic to its normal position.

A position that needed testing that needs reappraisal that needs radical change but not from Trump who is simply entrenching privilege ignoring the law and giving pardons to his apparatchiks who have rightly been imprisoned for unlawful acts.