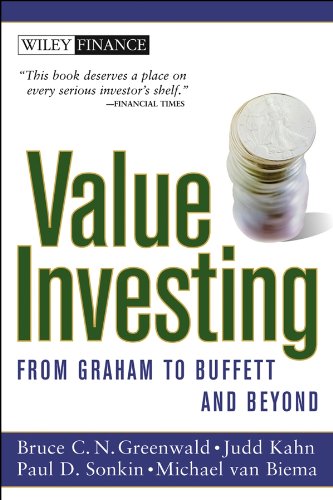 Value Investing: From Graham to Buffett and Beyond (Wiley Finance Book 82)

From the "guru to Wall Street's gurus" comes the fundamental techniques of value investing and their applications
Bruce Greenwald is one of the leading authorities on value investing. Some of the savviest people on Wall Street have taken his Columbia Business School executive education course on the subject. Now this dynamic and popular teacher, with some colleagues, reveals the fundamental principles of value investing, the one investment technique that has proven itself consistently over time. After covering general techniques of value investing, the book proceeds to illustrate their applications through profiles of Warren Buffett, Michael Price, Mario Gabellio, and other successful value investors. A number of case studies highlight the techniques in practice.
Bruce C. N. Greenwald (New York, NY) is the Robert Heilbrunn Professor of Finance and Asset Management at Columbia University. Judd Kahn, PhD (New York, NY), is a member of Morningside Value Investors. Paul D. Sonkin (New York, NY) is the investment manager of the Hummingbird Value Fund. Michael van Biema (New York, NY) is an Assistant Professor at the Graduate School of Business, Columbia University.
View on Amazon
The book is divided in two parts. The first part is dedicated to explaining the valuation approach the authors follow, which is based on the classic Graham-Dodd tradition but adapted to the current times. This part alone is worth the price of the book. There are not many books that cover this topic in such detail. Note also that the authors do not believe in the DCF approach and therefore take a very conservative approach to valuation.

In times when most Value Investing books seem to be obsessed with coming up with the optimal ratios to screen thousand of stocks, I think it is valuable to find a book that does not take shortcuts. There’s a huge difference between buying a stock at a discount from its intrinsic value and building a portfolio based on a statistically optimized ranking of stocks.

The second part of the book is a bonus track where they present the story and approach of the most successful Value investors -Buffett included.

This is one of those books that after reading I put it on the shelf with some of the classics such as Graham's The Intelligent Invester and Klarman's Margin of Safety. Each essay is lucid and clear. Whether your new to value investing or just need to remind yourself once in a while what it's all about, you should own this book.

Its pretty rare to find a book that actually has something to say about value investing that is an improvement over the original book from Ben Graham, The Intelligent Investor (1934 edition). Value Investing delivers a good overview of the value investing approach and then also delivers hands on practical advice about some recent innovations in equity analysis for value investors.

Using the approach popularized by Ben Graham this book describes the theoretical approach and then walks through two detailed examples of how to apply the notion of enterprise value to WD-40 and Intel. With detailed analysis of financials from both companies the book demonstrates how to understand financial structures that help predict and quantify a company's competitive advantage.

I still want to apply everything I've read here to a dozen companies and see how well the analysis works in the real world, but the theoretical framework appears to offer a very easy way to determine who really has a franchise and then place a fair value on that advantage and establish a fair price for the stock.

Excellent book that takes the realities of the market today and applies the value investing techniques of old. Professor Greenwald shows through illustrative examples that fundamental analysis still rule the day. As a former student of his, I found many of the same concepts he espoused in class to be in this book. However, he goes another level deeper in his analysis of different companies that I still found many take-aways. Also, the review of the vastly different value investing styles out there was extremely helpful in my own investing beliefs and provided me with additional resources to learn more about value investing.

A must-read for investors of any stripe, growth or value. This book, written by a couple of the most popular professors at Columbia Business School, explains the innovations in the field of value investing as practiced by some of the most successful investors in the field. (fair disclosure: I took Prof. Greenwald's courses in 2007) This book successfully bridges the gap between the traditional Graham & Dodd style of value investing to what works today. Although it's a paperback, it's written with the density of a textbook. The writing style is not light, and the actual meat of the book takes some time to wade through. If you don't have some experience in accounting or corporate finance, then Joel Greenblatt's The Little Book That Beats the Market is good to read first.

First, before reading this book I had the mistaken impression that value investing was all about investing in the ugliest, least interesting company you could find just because it had a low P/E ratio. I was completely wrong! (Maybe I have attended too many stock pitch sessions and heard too many poultry stocks and encyclopedia companies get pitched.) Modern value investing, according the authors: "When B. Graham went scouring financial statements looking for his net-nets, it did not concern him that he may have known little about the industry in which he found his targets. All he was concerned with were asset values and a margin of safety by that measure. A contemporary value investor had better be able to identify and understand the sources of a company's franchise and the nature of its competitive advantages. Otherwise he or she is just another punter, taking a flier rather than making an investment." What a breath of fresh air to read this passage.

Second, this book lays out a structured way to value a company by first looking at reproduction costs of assets, then earnings power, and finally the value of profitable growth. I, like the authors, find traditional DCF valuations to be plagued by false precision. The authors' more practical method starts by adjusting the balance GAAP balance sheet to calculate the cost of the assets for a potential business entrant. Next, the company is valued based on the earnings generates consistently, assuming no growth. A key insight is the value of the franchise: the difference between asset value and Earnings Power Value is the value created by a company that has significant competitive advantage. Last, the value of profitable growth is considered.

As a self-admitted recovering growth stock addict, I learned from this book that value investors are skeptical about growth for two reasons. One reason is that it is so hard to predict, but more important, many times growth is not worth much. Unless the return on capital (ROC) of the company is higher than the cost of capital, growth does not create value. (I am a slow learner; Greenblatt's example in The Little Book That Beats the Market of opening an additional gum store is even clearer to me.) The growth matrix and formulas in the book were a revelation to me. The surprising thing is how little multiple expansion a stock deserves based on growth. Unless a company truly has a franchise, expanding into other areas and "diversifying" the business often destroys value. And growth for growth's sake will not make a stock go up.

This book brings value investing into the modern stock market. Modern value investors still use traditional valuation principles in a structured way, but they also consider the value of growth and the attractiveness of the business. What a relief, I not restricted to buying typewriter and pay phone stocks! The authors quote Warren Buffett: It's far better to buy a wonderful company at a fair price than a fair company at a wonderful price.

In my opinion this book is by far the best thing that has been written about Value Investing since Graham's Security Analysis. Clearly and precisely (With real emblematic cases developed) stating the bases and different aspects taken by the best exponents of the school since its inception. Highly recommended

So, what's in the Appendix to chapter 3 that makes it so good ? Only the best explanation of 'The Present Value of Future Cash Flows' I have ever read. Come to think of it, the rest of the first half is worth studying as well.

There are one or two surprises in the 'Buffett and Beyond' section, enough to make you read it to the end anyway.

This book taught me a lot, well worth a read

A good read and a great for learning the ins and outs of value investing, particularly valuation

The foundation of the book is laid based on the concepts introduced by Benjamin Graham-who is commonly credited with establishing Security analysis as a firm discipline. The author tried to build on the works of Benjamin Graham and on that of his successors and incorporated the advances in value investing that have appeared over the last 40 years.

The book is divided into three parts. Part one is the introduction, part two is the crux of this book. Part 3 gives us bird’s eye view of investment strategies made by renowned value investors including Warren Buffett.

This book is an interesting read because it gives fresh perspective on how to analyse a company in a different manner compared to the traditional DCF approach. 4 stars.

Excellent book: I found it most helpful. It’s as good as Intelligent Investor, but even better, since Greenwald provides many valuation examples. Highly recommended!

The first part of the book is more technical with theoretical and empirical examples. How value is created over time, how capital plays a crucial role in the process and how competitive advantages enter the value equation. The second part is a collection of success stories which all share the main idea but largely differ in execution.

This is the best book on value investing that I have read so far and rate it on par with Graham's 'The Intelligent Investor'. Thank you Prof. Greenwald for explaining the concepts of 'reproduction cost of assets' and 'earnings power value' so clearly.

Good reference book, have read it now several times and keep it in my library for reference as I invest in companies

This book is a great consolidation of value investing theory and practice. For an overview of value investing it is the only book you need. If you like strategies discussed Bruce provides sufficient detail and this facilitates further research into those topics

There are a lot of books on this topic, but only few which are definitely worth reading (since many books are just copy pastes from the work of Graham). This one, however, is a book that stands out. In contrast with most books which explain valuation in terms of calculating discounted cash flows, it takes on another, more sound and conservative approach by looking at three stages of value, starting with asset valuation. This makes it more sound and conservative than most valuation models who are mainly founded on DCF.
It is a great book to read as a stepstone to Graham's Security Analysis. But I recommend it to all investors!