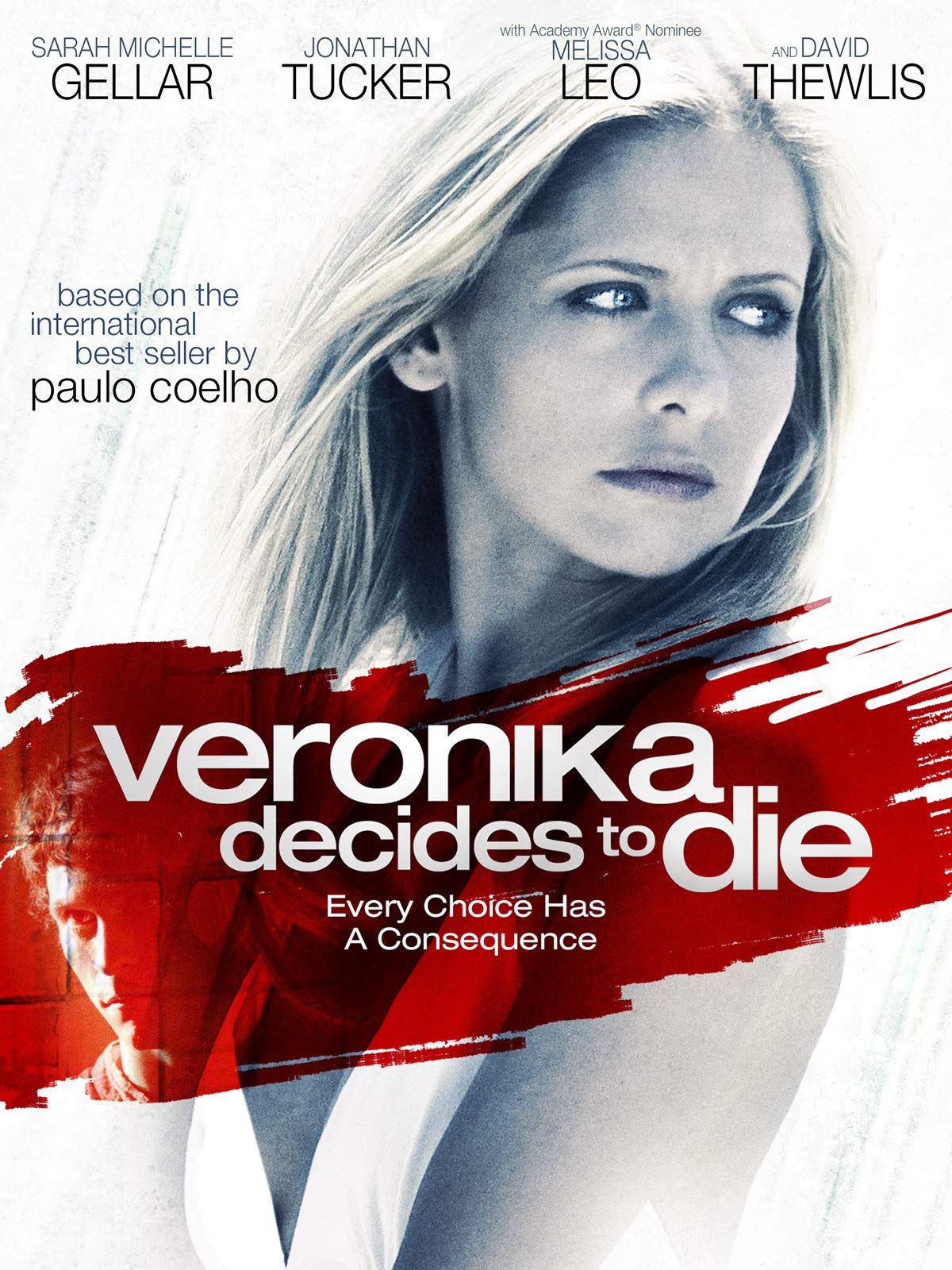 View on Amazon
Brilliant therapy—breathtaking really. Unethical, dishonest but was perhaps the only way Veronica could choose to live. Veronica needed to find her reasons for living, not because she should live but because she wanted to live & make the choices of how she would live. That is our birthright. I am a retired social worker & Therapist...I have lost a brother & close friend to suicide. They both died holding the views of others as more important than their own. Veronica decides to die demonstrates that another choice is possible & better than dying for other people’s inane ideas.

Veronika Decides to Die is a film that reminds me of the importance of having dreams and putting our priorities in the proper place. In a nutshell, Veronika is successful in the corporate world, but she's miserable. Miserable to the extent that she tries to kill herself. Living a life that she didn't want but feeling the pressure to do so because of the expectation to make as much money as possible, as fast as possible. Veronika's true passion is the piano which she is exceptionally skilled. But her parents, just as too many parents screw up their kids lives, decided that following her passion wasn't stable enough so being accepted into a prestigious music school wasn't good enough. Passion is for saps, having dreams is for losers. Veronika's parents wanted her to be a real American and in America you're not good people unless you're making lots and lots of money usually doing something you despise. Yeah, major suckage. I lived that life and yeah, I thought about offing myself too. Corporate America is a dumpster fire where a lot of dreams go to die.

Fortunately for Veronika she is admitted to a facility that has a doctor that took on the challenge of treating her using a very controversial and unconventional method. No ending spoilers here. I'll just say that this film hit me close to home also because I have a special interest and respect in people would strive to master their craft. It's inspirational to see this even if it's in film as opposed to reality. Mastering a craft is not popular in general unless someone or a group can use that talent for their own financial gain. Just as legions of parents don't have any interest in the talents of their children unless or until they make large sums of money from that talent. Humanity fails again when talent, refined skill isn't relevant in and of itself. There has to be money involved otherwise, no one cares. But to hear Veronika play the piano was bliss and when a person has that much refined talent it should be respected and honored. When a person is that good, common sense says follow that as a career path. Creative talent is an amazing thing and shouldn't be taken for granted. Wouldn't that type of world be a sight?

4*, would have liked a bit more development of some of the other patients just to flesh out the world but overall, good film and I liked the ending. Very powerful message at the end especially in these times when life is so easily taken for granted.

Veronika Deklava (Sarah Michelle Gellar) appears to have it all. She’s successful and attractive — with a high-paying corporate job, a gorgeous New York apartment, and loads of dating prospects. To those who seek success for the sake of having it, they’d see Veronika as someone who wants for nothing. So why does she want to die? Why does she swallow a pill cocktail and then sends an alarming email? She wakes up at Villette, an elite mental health facility, where she receives horrible news: her pill cocktail has caused irreversible damaged to her heart. How irreversible? She will die soon, out of nowhere, and no one can do anything about it. Alarmed, Veronika does things in her own terms. She still wants to end her life, but that’s before she meets a gorgeous and mysterious patient (Jonathan Tucker) and connects with her doctor (David Thewlis) and a fellow patient (Erika Christensen). She has the ultimate epiphany: she wants to live. That’s not an option though. If she must die, then she wants to live every single moment as though it were her last, but she can’t do that while locked up in Villette, can she?

I had my pick of Ammy videos to praise. This seems like an odd choice given the current pandemic, but if you’re familiar with Paulo Coelho, you’d know that his books are a rare mixture of literary, heartwarming, philosophical and ultimately encouraging. This adaptation of the popular novel isn’t as great as the book, but it’s still quite good — the perfect pick-me-up for the current climate. Sarah Michelle Gellar is wonderful as Veronika. Even though she isn’t as young as the book character, it takes a seasoned actress to express the amount of pathos it takes to portray such a complex character. (And yes, she looks young enough to play a twenty-four-year-old.) Her journey to self-discovery is enlightening and heartbreaking at the same time. The story also tackles the primary theme of the book — how material success does not equate to happiness. Dreams and success are great things to have, but only if they coincide with your values. If you do it because you feel you ought to, or to fulfill some external desire (your parents’ expectations, society’s demands, etc), or to compete with and be better than others, then it won’t fulfill you. Just make sure that whatever you do in life brings you pleasure and joy. I enjoyed this film, and the last scenes are touching and beautiful. Downsides? It’s rushed in some areas. The book isn’t long. Most of Coelho’s books are 55K words long or less, but the film rushes on the parts that matter most. For instance, I would’ve liked more Veronika scenes prior to Villette. Instead, we get a five-minute intro into her inner psyche as she goes about her empty life. Other than that, I cannot recommend VERONIKA DECIDES TO DIE enough. Four out of five caramelized cinnamon cold brew iced coffees!

Dull dispiriting film good looking but poorly acted by everyone including David Thewlis I'm afraid. Sarah Michelle Gellar can perform better than this - see Southland Tales, Cruel Intentions, Harvard Man - it was her name that drew me in, but I was very disappointed.

I'm still waiting for a region 2 copy! I purchased this Swedish copy of the film because I couldn't wait any longer! I wish this film found the right distributor, because it's been suffering for the past 4-5 years! This film is amazing and it has a bloody good cast! I wish more people saw it!