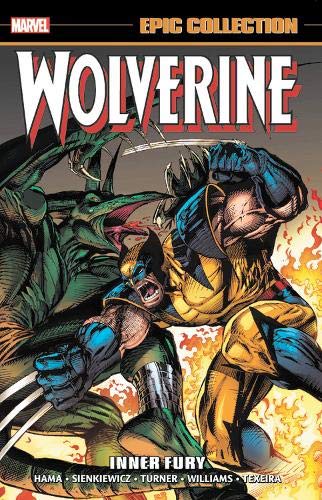 Magneto tears Wolverine's world apart! First, Logan intervenes in a Hydra experiment, but a nanite infection has unexpected effects on him! Then, Wolverine takes Rogue and Jubilee on a mission to the Savage Land - where Sauron has risen again! And in Australia, Wolverine and Jubilee battle a suddenly sentient Sentinel - and Jubilee confronts her past! Logan's world tour continues when he is lured to Tibet by a group seeking to claim his remarkable abilities! And Sabretooth takes the spotlight - but what is his surprising connection to Mystique? Finally, the X-Men face off against Magneto in a truly savage showdown - but when Magneto crosses a horrifying line, will Wolverine ever be the same again?!

View on Amazon
I always liked the run of comics here. Wolverine, Rogue, and Jubilee in the Savage Land was always a great setting and characters. The Wildlife issue is great because people should care about the environment and wildlife, and anybody who has ever read a Wolverine comic knows that he cares deeply. I always respected that because I care, too. Great run of the 4 issue Sabretooth series, and a few interesting trades from Wolverine at what some would argue was the ultimate peek of his popularity in comics, the early 90s. As a kid at the time, I hated that everyone from Wolverine to Batman was getting “rubbed off” to an extent, but as an adult and in retrospect, it was really good storytelling just to show that these individuals are still human. I am not ashamed to say that Wolverine 75 can still make me cry, especially the ending. ... Now, having said all that, I can not wait for what should be the next Wolverine Epic Colllection featuring issues 76-87 (88ish) ...not sure but somewhere in the late 80s because personally, I have always loved this story arch more than the ultimate fall of the guy in the 90-100 issues. The 76-80s issues to me are the best (again, I hated it as a kid because right, “wtf? No adamantium claws?!”, but again, reading it as an adult, you see that he is at his most vulnerable in what SHOULD be the next Wolverine Epic Collection Book. I can’t wait. Hopefully someone somewhere at Marvel gets that one out into my hands as well. But yes, right here is some good stuff, too.

This newest Wolverine Epic Collection contains several different comics in it. First is Wolverine: Inner Fury where Logan is infected and his healing power turns against him. I’m not a big fan of the artwork by Bill Sienkiewicz. He’s always been a bit too abstract for me and this is no exception. Then there’s Wolverine #69-74. That includes Wolverine, Jubilee and Rogue going to investigate the Savage Lands where they run into Sauron. Then Logan and Jubilee run into a Sentinel that is forming a human consciousness. Next is Wolverine: Killing where the artwork turns me off again from the story. Then things shift to the first few issues of Sabretooth, which is odd because Wolverine’s not even in every one of those issues. Wolverine Global Jeopardy was a collaboration between Marvel and the World Wildlife Fund so while Logan joins a team including Namor and Ka-Zar there are other pages covering endangered species. The best is really saved for last with X-Men #25 where Magneto pulls the adamantium out of Wolverine’s body and then Wolverine #75 where the X-Men try to save him from this traumatic experience.